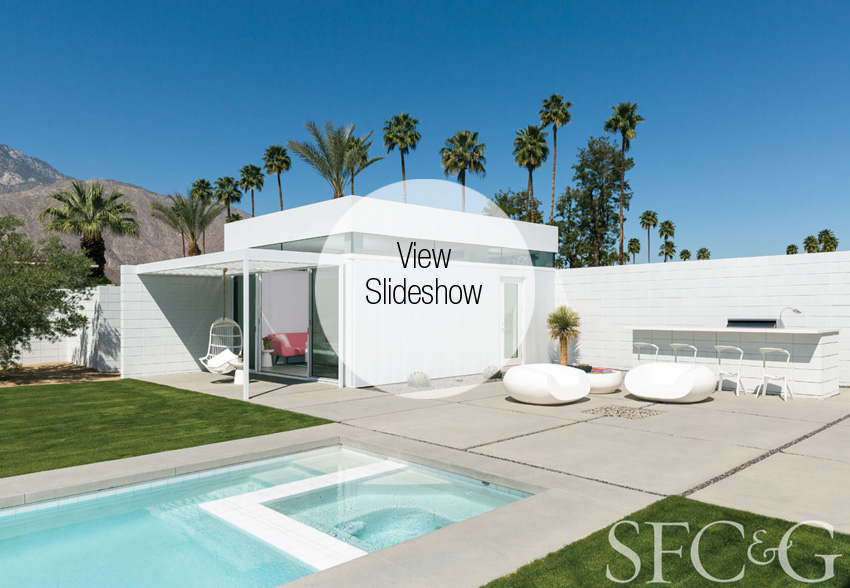 A pop and contemporary art collection paired with sculptural furniture and a gallery ambience, gives a cool, collected vibe to San Francisco interior designer Martha Angus’s Palm Springs getaway. Her modular space, a streamlined, high-style home designed by celebrated architect Jim Jennings, showcases elements ranging from works by Andy Warhol and John Baldessari to midcentury furniture by Warren Jacobs and Arne Jacobsen to new classics from Design Within Reach. By bringing a focused aesthetic to every aspect of the project, Angus has created a next-generation retreat that honors the area’s midcentury heritage.

The designer previously owned a weekend house in Napa Valley. “It was idyllic in so many ways,” she recalls. “Picture wonderful antiques, views of organic vineyards. But the moment I set my eye on a project by Jim Jennings that’s not far from here, I was electrified.” She subsequently commissioned Jennings, who partnered with Ross Hummel of San Francisco’s LineOffice Architecture. The fruit of their three-way collaboration arrived at her address on a flatbed truck.

Manufactured by Blue Sky Building, her 2,800-square-foot home started life as a series of prefabricated components that were assembled in a matter of hours as if they were parts of a life-size erector set. “The system eliminates the need for obvious support columns and visible bracing,” says Hummel. “It allowed us to create wide, unobstructed spans beneath what appears to be a hovering roof.”

Angus’ thoughtful curation of the gallery-like spaces is evident in her period-appropriate collections of art and design. “In my mind, art is interactive,” says Angus. “It’s a living thing.” A vibrant Warhol Mao silkscreen and a mirrored quote from cinematic swinger Austin Powers enliven the main living space, while works by  Ellsworth Kelly and Roy Lichtenstein add graphic dimension to the master bedroom. Meanwhile, it’s the absence of color that makes the all-white kitchen so striking: With appliances and storage hidden within an island and behind a wall of flush cabinets, the space is so discrete it might be mistaken for a minimalist installation.

Outside, an eight-foot-high, white concrete wall sequesters the building and its satellite guest casita from streets on the property’s eastern and northern sides. It also encloses a courtyard that extends beyond the house’s western façade of windows and sliding glass doors. Bar, dining and lounging areas sidle up to beds of manicured grass and concrete pavers that surround a 50-foot pool and hot tub. But this inner sanctum has its extroverted side: It’s also a strategic viewing platform for expansive ranges of the Santa Rosa and San Jacinto mountains.

“I want all of my interiors to literally and stylistically stand the test of time,” says Angus, “So I guess you could call me a classicist? I like things that endure because my family moved around a lot when I was growing up—close to three dozen times before I was an adult,” she explains. “As a result, I want the homes I live in and create to have soul; I want them to be places where every aspect of your being feels embraced.”

A version of this article appeared in the June/July 2016 issue of SFC&G (San Francisco Cottages & Gardens) with the headline: Vision in the Desert.