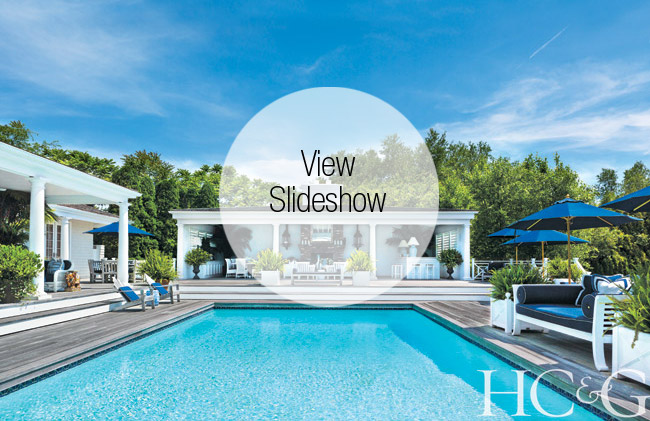 The last thing we need is another blue-and-white plate, proclaims fashion designer Dennis Basso, describing his most recent purchase, a full set of Royal Copenhagen plates, bought while he was vacationing in Amsterdam with his husband, Michael Cominotto, in July. But as any collector will readily acknowledge, more is more. The couple’s home in Water Mill is proof positive: an unerringly tasteful repository of carefully curated tableware, serving pieces, and linens from their travels to far-flung locales. “We just love collecting beautiful things from around the world.”

With a flagship store on Madison Avenue, Basso is a top dresser and favorite furrier of the fashion and social sets, with clients including Nicole Kidman, Helen Mirren, Catherine Zeta-Jones, and the late Elizabeth Taylor. He also produces ready-to-wear and bridal collections and is among a handful of savvy designers who have embraced QVC since the shopping channel’s inception—all with Cominotto by his side, serving as the president of Dennis Basso DBMC. Together for 24 years, the couple married in 2011 with a ceremony and reception at the Pierre hotel.

“We wanted a home we could enjoy 12 months of the year,” Basso says of the 5,000-square-foot house he and Cominotto built 17 years ago. After renting in Water Mill for a year, they found a two-acre plot in a potato field south of the highway for their Xanadu. Originally working with decorator Nancy Corzine, Basso and Cominotto focused on creating glamorous spaces with an easy flow between indoors and out, all in the de rigueur Hamptons palette of blue and white. French doors in the living and dining rooms open to a 3,000-square-foot deck that has hosted its fair share of cocktail parties (on special occasions, dinner dances for 350 might take place on the tennis court in the lawn that unfurls beyond). A crisp and tailored garden in varied hues of green gets a shot of color from bursting hydrangea (blue and white, naturally), another Hamptons staple. The couple positioned their bedroom and sitting room on the first floor to create a cozier space for quiet winter weekends, but it’s the outdoor entertaining pavilion, nicknamed the “lantern lounge,” that’s the heart of this home. Here, long summer afternoons stretch into the evening in the company of friends.

In 2009, working with interior designer Kenneth Alpert, a good friend, Basso and Cominotto built a seamless 3,500-square-foot addition, reconfiguring the house into a horseshoe shape that hugs the Slim Aarons–worthy swimming pool. “I’ve known Dennis for more than 30 years,” Alpert says. “You don’t always get the opportunity to work with a friend who has great taste, but also someone who lets you be creative. Michael, Dennis, and I all travel to Europe for business, and we’ve been able to buy some great pieces together.”

Even today, Basso and Cominotto will send Alpert a camera phone photo of an item under consideration. “Ken always tells me: ‘Don’t think twice about it,’” says Basso, knowing that a place can—and will—be found for each new introduction, even if it means rearranging some pieces from the couple’s superb collection of Chinese Export porcelain. None of the various collections in the house is static, and occasionally they even bear the stamp of sentiment. Inherited opera glasses and racing binoculars have inspired the acquisition of similar pieces. A gouache by Alexander Calder entitled Blue Skies—a significant purchase for the couple 17 years ago—has retained its position above the mantel in the living room.

Consummate entertainers, Basso and Cominotto leave little for guests to desire, be it a fully loaded buffet for the Feast of Seven Fishes on Christmas Eve (an Italian-American tradition), a bathroom stocked with Molton Brown products for weekend guests, or a continuous pour of rosé after lunch. “We really wanted that resort-like feeling,” Basso says. “Our friend Christian Leone once said that it’s like being at Hôtel du Cap.” At Basso and Cominotto’s house, any table—from the kitchen to the lounge to the dining room—has plenty of room for an extra chair. “I learned that from my mother. I’m a fan of the guest of a guest. I think it makes evenings more fun.”

After all, not everyone can pull together a seated dinner for 64 or host a luncheon for Hillary Rodham Clinton during her run for the U.S. Senate. “As an American designer,” Basso says, “it was a special privilege to host the First Lady.” But despite the house’s ability to host famous politicos and casts of thousands, it’s the more intimate dinners for six or eight that are the most memorable for Basso and Cominotto. “Michael loves to cook,” Basso continues. “And there’s nothing better than bringing close friends together for a wonderful meal and drinking wine late into the night—exchanging thoughts and ideas and just being yourself.”

A version of this article appeared in the September/October 2014 issue of Hamptons Cottages & Gardens with the headline: Basso Profundo.