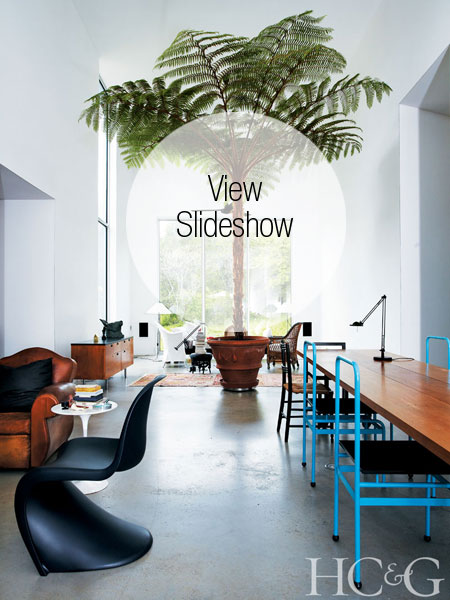 If you were part of the SoHo scene of the 1970s, ’80s, or ’90s, you may have already met Jack Ceglic—who pronounces his name with a soft shuh and a harder glick. A native New Yorker, he was one of the founders of Dean & DeLuca, the artisanal grocery that opened in a Prince Street storefront in 1977 and went on to become an international phenomenon with locations in such far-flung places as Turkey and Dubai.

Dean & DeLuca was more than a pioneering foodie haven: It helped set the design and even lifestyle tone of the burgeoning downtown milieu. As D&D’s creative director, Ceglic masterminded the look, designing stores, displays, packaging, and products. As the ’90s came to an end, he designed and built an industrial-chic house in East Hampton for himself and Joel Dean, his partner in life as well as in business, on two acres of land within walking distance of Newtown Lane.

Described by Ceglic as “one big room with two adjoining sheds,” the 2,300-square-foot house measures 18 by 48 feet, with 20-foot ceilings, and is built of enameled steel with radiant-heated concrete floors. Much to Ceglic’s liking, “It’s completely hidden. The trees were there when I bought the land. I just built the house on a clearing in the middle of the trees.” After Dean died, in 2004—the men had been together for 46 years—Ceglic pulled back from the business. Always an artist, he began painting with renewed vigor. But so many people fell in love with the barn-like house in the trees that Ceglic found himself pursuing an additional career: designing similar homes for like-minded purists. His structures, he says, are both practical and inexpensive. “I use pre-engineered parts from companies that make barns and airplane hangars and commercial buildings. I use aluminum store windows and garage doors, off-the-shelf pieces. The envelope is simple, devoid of ornament. It’s what happens inside that makes each of them unique. I think of them as portraits of the people I work for.”

Over the years those people have included Peri Wolfman and Charles Gold, proprietors of Wolfman-Gold and Good, the late Manhattan kitchenware boutique; husband-and-wife thespians Ken Olin and Patricia Wettig and actor Ron Rifkin; and Broadway director Joe Mantello. “Jack sees the innate integrity and beauty in what we think of as ‘ordinary,’ and the astonishing complexity that is required in order to achieve simplicity,” says Mantello. “He has that great gift of knowing what to remove. His eye is inherently anti-ornamental and deeply honest.”

While Ceglic was building a house in East Hampton for Jon Robin Baitz, “he spent a year looking at the property, watching how the sunlight works in each season,” recalls the playwright and screenwriter. Baitz is particularly grateful for the way Ceglic designed the home to let in “the enormity of sky and trees. It mirrors my attempts to live with not much more than books, light, and art. It has taught me how little we need and how much we need.” Ceglic’s longtime friend Joel Grey adds, “There’s nobody I trust more to give me design advice than Jack. I’m a very opinionated guy, but I defer to him. I just do what he says.”

In addition to designing their houses, Ceglic has also been painting the portraits of his many friends and admirers in recent years and will have a one-man show at the Ille Arts Gallery in Amagansett from July 27 to August 19. Simultaneously, Pointed Leaf Press is publishing a brand-new monograph, Jack, a study of his portraits from the last three years. “Having known and admired Jack for decades as a designer and creative director,” says Pointed Leaf’s publisher, Suzanne Slesin, “I’m excited to discover his work as an artist and to have the extra privilege to translate his entertaining, powerful, and sensitive portraits into a book for others to enjoy.”

Ceglic did his portrait work in the house until last year, when he moved into a brand-new studio on the property that he designed for himself. The simple 1,000-square-foot structure is made of the same materials as the house, with oversize garage doors at both the north and south ends of the building and triple clerestory windows on the east and west. Ceglic now shares the East Hampton house and a loft in SoHo with Manuel Fernandez-Casteleiro, a principal in Parsons + Fernandez-Casteleiro Architects of Manhattan. The men met nine years ago and married in 2012. “He’s my soul mate,” says Ceglic. “We just enjoy life together.”

With Ceglic’s painting relegated to the studio, the house is more open for relaxing, both indoors and out. A 16-foot-high Australian tree fern that started out as a potted plant 13 years ago now dominates the airy, primary living area. And nearly every piece of furniture has a story, from the set of blue De Stijl chairs designed by architect J.J.P. Oud in 1927 to the dining table specifically designed for the space by Joe D’Urso. Modern pieces by Verner Panton and Eero Saarinen mix with an Edwardian club chair, Victorian wicker, and even an antique Louis XVI armchair. The daybed anchoring the sitting area was given to Fernandez-Casteleiro by Edgar Kaufmann, Jr., the son of the man who commissioned Frank Lloyd Wright to design Fallingwater. The piece was designed by the younger Kaufmann’s other half, architect Paul Mayén.

While savoring the tranquility of their home, the couple also like to entertain, though there’s a new house rule now that Ceglic is painting with such focus: “Anyone who wants to come for a visit has to be willing to pose,” he says. “But people seem to like doing it. I open both garage doors in the studio, and the curtain billows and birds fly through. It’s extremely pleasant.”

A version of this article appeared in the July 1 2013 issue of HC&G (Hamptons Cottages & Gardens) with the headline: The House That Jack Built.