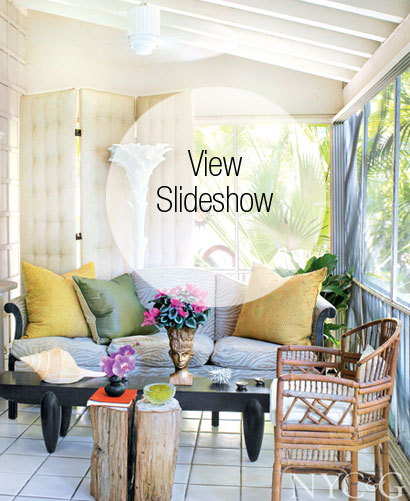 "It’s an enchanting cottage in my own private jungle,” says decorator Larry Laslo, describing his house in Palm Beach. “And it also happens to be one block off the ocean, six blocks from the Breakers, and six blocks from Worth Avenue!” Built in 1938, Laslo’s warm-weather getaway is decidedly diminutive compared with his prior expansive residences in New York. “My apartments in Manhattan had fireplaces in every room,” he reminisces. But even in Palm Beach, Laslo has a hearth, a fitting perk incorporated by the cottage’s designer, Howard Major, who worked in the British Colonial style. The house is one of a handful that make up the little-known Phipps Enclave, which includes classic landmarked 1930s structures by Major as well as Addison Mizner and John Volk.

Laslo bought the two-bedroom, two-bath cottage four years ago and has worked on it gradually. “The house was a nightmare when I got it,” he says. “There were tacky scenes of Venice on the walls, with the Bridge of Sighs repeating at least five times!” Major overhauls came first—such as the removal of orange-painted woodwork and olive-colored molding—after which Laslo refinished the cedar floors, installed a new fireplace, and introduced cosmetic touches in the bathrooms and kitchen. “I didn’t want it to be brand-spanking new.”

Despite its size, the cottage is anything but minimal. “It’s full of stuff I’ve bought from all over the world,” Laslo says. “I’m always traveling—to China, Venice, Paris, or Martha’s Vineyard. Wherever my clients want me to go, I go.” While the decorator has spent a lifetime “hosting the planet,” he claims he couldn’t be happier having less square footage to oversee. “I have done houses with 17 bathrooms. It’s mind-blowing to me to have all that space—I wouldn’t want it. And besides, my garden is five times bigger than the house!”

And it looms larger, with well-established, 120-foot banyan trees that tower over the cottage, shielding it from the hot sun, although Laslo admits that he’d rather thumb through auction catalogs than dig his thumb into the soil. “My idea of gardening is going out and picking something!” he proclaims.

But Laslo has always appreciated beauty. A native of Bethlehem, Pennsylvania, he started as a painter and illustrator, working for Vogue, Harper’s Bazaar, The New York Times, GQ, and Playboy before eventually turning his attentions to interior design. When he was hired to rework the interiors of Bergdorf Goodman’s flagship store on Fifth Avenue, he knew he had arrived. “It was really a dowagers’ store when I went in,” he recalls. “I made it more elegant, but current, and brought it into the 20th century.”

In addition to designing private residences worldwide, Laslo has created fabric lines for Kravet and Robert Allen and furniture for Chaddock, which he has used for clients’ homes as well as his own. “If you know how to design one thing, you can design anything else,” says Laslo, whose trademark brand of “mad eclecticism” is vividly evident throughout his house, from the reproduction of Botticelli’s The Birth of Venus in the living room—it’s painted on a silk-screened zebra background—to a striking portrait by the decorative painter Jean Dupas. The custom-made, baldachin-style master bed features a circular white plaster crown, an architectural fragment from a church, which Laslo has draped in dramatic folds of fabric. Grounding the theatrical atmospherics in all the rooms is a stunning collection of modern photography by such artists as Herb Ritts, Horst P. Horst, Mario Testino, and Irving Penn.

Given his rigorous travel schedule, Laslo finds Palm Beach a balm to the senses and sees himself staying for the long haul. “Good design always involves a certain back and forth, a balance of more formal and casual elements,” he says. “And while I’ve previously had much more formal houses than this one, here I am, despite everything! Houses speak to you, and tell you what you can or cannot do.”

A version of this article appeared in the Holiday 2015 issue of New York Cottages & Gardens with the headline: Tropical Punch.