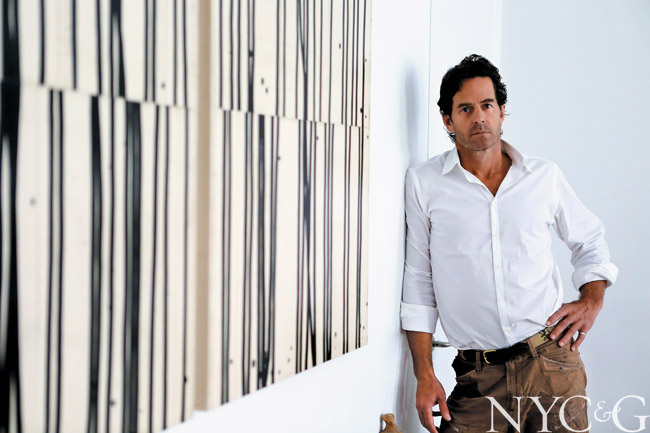 The timeworn but still elegant façade of Beethoven Hall, a circa-1860 meeting hall and community center just off the Bowery, hardly evokes the archetype of the quintessential New York artist’s loft. But once inside the live-work space of abstract painter Robert Kelly, you are suddenly immersed in the now. Or at least that’s how it looks on first glance.

The main studio space is not only appealing in its proportions and meticulous in its minimalist detailing, but also surprisingly neat for a studio where so much work is produced. “I have another studio space in Long Island City where I keep the mess,” confesses Kelly, who at 57 has a model’s rugged good looks and the demeanor of an Ivy League philosophy prof. “But I tend to keep things neat in the probably mistaken idea that an orderly environment reflects an orderly mind.”

The renovation of the raw space he bought in 2002 was undertaken in collaboration with the late architect Nasser Ahari, who was a friend of both Kelly and his partner, photographer Shirine Gill. The project took from 2004 until 2007, during which time the sprawling first floor as well as the damp basement were transformed into a gallery-like environment with surprising nooks and crannies for privacy and retreat. “Although it’s on the first floor and so close to the street,” says Kelly, “it’s extraordinarily quiet. The quality of silence and sanctuary here is very real. It’s tangible.” 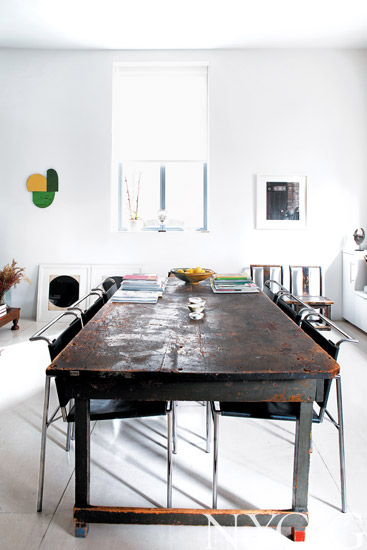 The building itself, built as a social hall for the Lower East Side’s German community, was used for weddings and dances, boxing matches, and conferences. In 1895 the rules of the American Bowling Congress were standardized here, and it was a key meeting place during the women’s suffrage and labor movements of the early 20th century, with notable speakers including Emma Goldman, William Randolph Hearst, and even Leon Trotsky. In later years episodes of The Honeymooners were filmed here, as well as scenes from Martin Scorsese’s Raging Bull.

Nowadays it’s decidedly upmarket, but still true to its bohemian roots, with fellow residents including architects Alissa Bucher and Robert Rogers, artist Caio Fonseca, and photographer Gregory Colbert (whose 6,800-square-foot penthouse loft has been listed recently for $25 million). As a painter, Kelly counts Mondrian, the De Stijl movement, Bauhaus modernists, and artists as diverse as Jean Arp, Richard Diebenkorn, and Ellsworth Kelly (no relation) among his greatest inspirations, and indeed the ethos of his work could not be more in accordance with these influences. He describes his work as a palimpsest, conjuring images hidden behind images and secret histories making themselves known.

Kelly, who graduated from Harvard and is represented in New York by Leslie Feely Fine Art, prefers to call himself a painter, rather than an artist. While his canvases do have paint on them, he doesn’t actually use brushes—instead, he combines drawing and assemblage along with painting. Surfaces are complex and deep, particularly the collages, which incorporate everything from old posters and postcards to handwritten letters, stereoscopic slides, and antique botanical prints.

Although he has spent the majority of his adulthood in New York, Kelly remains deeply connected to his native Santa Fe, where he grew up as a twin (his brother, Thomas, is also an artist and lives in Nepal). Throughout the loft, there are pairs everywhere—objects, chairs, tribal artifacts—all testifying to his identity as part of a doubles act. “Painting is how I started to find refuge, in terms of private space and a bit of separation from my brother,” Kelly recalls. “I would go downstairs, outside of our shared bedroom, to paint. And there were so many mentors available to us. Dad was Georgia O’Keeffe’s insurance agent.”

For many years, Kelly worked in a studio on Warren Street in Tribeca, and he was there on September 11, 2001, when the World Trade Center towers collapsed just blocks away. But he was already growing dissatisfied with what Tribeca had become. “I like the sense of being a pioneer, a pilgrim,” he says. “When I moved there, Tribeca had a quality of loneliness. I liked that I had to get on my bike and head to SoHo to find someplace to do my laundry.”

He first came to Beethoven Hall in 2002, then under the control of Martin Kunz, an advocate for emerging art. Kelly moved in, laid plywood down over the ruined concrete, wood, and mosaic flooring, and began to work. When the building converted to condominiums in 2004, he contacted Ahari and began customizing his home, although he admits he was intimidated by so much “swank space”—4,500 uninterrupted square feet of it on the ground floor alone.

To admit more light, formerly bricked-up windows were reopened, and light wells were sunk to create windows on the lower level. The ceilings were dropped two feet to hide the I-beams and sheathe a sophisticated lighting system. Kelly himself did the floors, which look like stone, but are in fact sheets of four-by-eight-foot plywood that he painted individually. Some of the enormous ceiling beams were left exposed, as were the 16 cast-iron columns in the basement and much of the original brick. 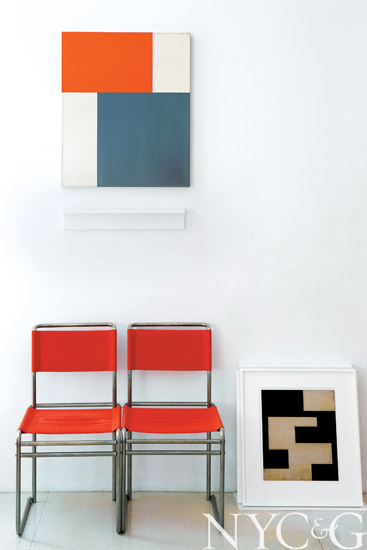 Furnishings include a range of mid-20th-century and contemporary pieces, including chairs by Poul Kjaerholm, Eileen Gray, Marcel Breuer, and Piero Lissoni. They contrast beautifully with rough-hewn wooden antiques, including an old drafting table Kelly brought with him from his studio in Cambridge and a New Mexican cottonwood workbench from the early 1800s. Rugs are tribal, from Africa and the American Southwest.
Not surprisingly, there is a lot of artwork on view and even more books—shelves upon shelves and multiple stacks of them. The orderliness of the space perfectly correlates with the linearity of Kelly’s canvases. The more subtle surfaces of the paintings, the echoes of the past, relate to the rougher edges and exposed history of the building’s original brick and mortar.

“It’s so important to avoid the pitfall of having a beautiful contemporary space that is soulless and cold,” says Kelly. “Everything here resonates for me personally. The Danish furniture comes from my first exposure to Danish design when I traveled as a photographer back in the ’70s. The artifacts are living memories. I guess that’s what happens when square footage turns into a home: The objects become part of the conversation of your whole approach to art and to life.”

A version of this article appeared in the March 2014 issue of New York Cottages & Gardens with the headline: An Artist and His Studio.

BROWSE MORE PHOTOS FROM THIS FEATURE In THE FULL GALLERY BELOW

This article appears in the March 2014 issue of NYC&G (New York Cottages & Gardens).