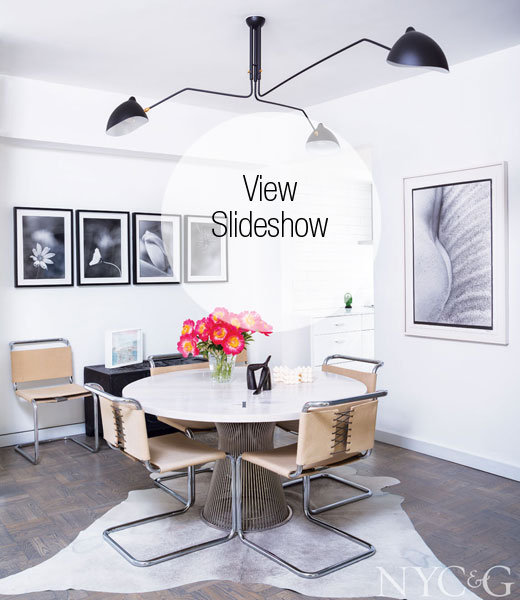 While he was growing up on the Upper East Side, Brian Leighton was surrounded by images of naked women. His mother, an avid collector of nude portraits, inspired his career as a photographer, specializing in black-and-white nudes. Today, his work is included in the permanent collection of the Museum of Modern Art and also enshrined in the annals of television, as his photographs have often been in high demand among set decorators for such popular shows as Sex and the City. But after two decades working as a photographer, Leighton couldn’t resist the siren call of another career challenge, one that would expand his horizons beyond two dimensions. “I see interior design as a natural extension of photography,” he says of his new dream job. “I’m just framing a shot.”

It began simply enough. Friends, and friends of friends, would come over to his Midtown East apartment to buy photographs, and then ask him if he could design their homes. He’s now working on five interiors projects in various cities. “I still sell and license my art,” he says, “but this business is official.”

As he does in his photography, Leighton plays with light and texture, but now focuses on how these elements affect interior spaces. In one corner of his bedroom, a custom-designed mirrored desk is positioned in such a way that it reflects light onto a gray square outlined on the wall. “It makes a pretty window of light each morning,” Leighton says. “It’s basically a piece of art that’s there every day of the year.” One could call it a personal James Turrell. In the living room, a Maurizio Tempestini tension lamp complements the brass detail on the credenza, on which a television displays a rotating slideshow of Leighton’s latest photographic series, “Here Today.” The images on the screen become a part of the gallery of artworks that hang on the wall behind it.

Leighton loves to keep things moving, and routinely rearranges his art collection and sells old furniture to accommodate new acquisitions. “Art shouldn’t be stuck to a specific spot—you should move it and change it up,” he says. “It makes visitors excited to come over and see what’s new, and it trains you to think about visual relationships.”

Among the apartment’s very few permanent installations: the iconic Pepsi-Cola sign in Long Island City, perfectly framed by the bathroom shower’s window. The tiny room takes on a surprisingly sophisticated allure, thanks to smart-looking porcelain wood tiles, though the sink and cabinetry are standard-issue Ikea. Leighton is a pro at high and low.

“High” items on view include the vintage Marcel Breuer Spoleto dining chairs that Leighton and his partner, Bob Mikulenka, bought at a store in Palm Springs. The chairs had been in the desert for so long that the humidity of Manhattan caused their back laces to snap. Leighton took it as a sign to secure them with a different-hued lace, a graphite gray that’s attuned with the rest of the apartment’s largely monochromatic color scheme.

Leighton reconfigured a hallway in the middle of the apartment to create the airy, open dining area, which lies adjacent to the ample galley kitchen. “I love being able to chat with guests while I’m cooking,” he says. “It’s so frustrating when you have to scream, ‘What was that?’ a hundred times because the rooms aren’t connected.” Now that the formerly boxy apartment is all opened up, Leighton even has room to practice his former craft on occasion, shooting nudes in the living room with just seamless and a model light as his only tools. “We live in a time when you can work anywhere,” he says, “so my business is wherever I am.”

A version of this article appeared in the October 2016 issue of NYC&G (New York Cottages & Gardens) with the headline: Artful Aerie.