While the housing styles most associated with our area
are traditional—the saltbox, the center-hall Colonial, the farmhouse—Connecticut is also a hotbed of modernism. Thanks to a group of architects called the Harvard Five, there’s a real passion for the style popularized by its most famous member, the late Philip Johnson. That said, our state has a mixed record when it comes to saving mid-century moderns from the wrecking ball. In this column, we covered the demolition of a Paul Rudolph-designed home in Westport and the plight of Johnson’s Alice Ball House in New Canaan, which nearly got turned into a pool house (it’s back on the market for $2,795,000). Currently at risk is another New Canaan home, designed by Harvard Five disciple Victor Christ-Janer for his own use in 1952. The current owner, a local builder, applied for a demolition permit in August that was met by a 90-day delay, giving objectors time to come up with a plan to save it.

Smaller in number, but no less passionate, are preservationists advocating for the mid-century homes in Litchfield County. Harvard Five architect Marcel Breuer, best known for designing the Whitney Museum of American Art in New York City, built widely in both New Canaan and Northwest Connecticut: The tiny town of Litchfield, for instance, has five Breuer-designed homes, including the circa-1965 Stillman II, listed for $2,995,000 with Roger Saucy of Klemm Real Estate in Washington Depot. “The landscape is so well-suited for this style of architecture that invites the outside in,” says Saucy. “The way these homes are sited to take in their natural surroundings is stunning.”

Stunning, too, is our handpicked selection of modern and contemporary listings. We hope you agree!

New Canaan
1. The Glass House
Built by Philip Johnson in 1945 (completed in 1949), it is open for tours and events. philipjohnsonglasshouse.org.

3. The Celanese House
Edward Durell Stone, who designed the Museum of Modern Art in New York City, built this home in 1958. Beautifully renovated, it changed hands for $4.1 million in 2008.

Darien
7. The Goodyear House
Built in 1955 by John Johansen, the only surviving member of the Harvard Five; listed for $2,795,000 with Inger Stringfellow, William Pitt Sotheby's International Realty in New Canaan, 203-321-9361.

Weston
10. The Morris Greenwald House
Built in 1955 by Mies van der Rohe, this home was on the market for a few years but is not currently for sale. Zillow estimates its value at about $1.4 million. 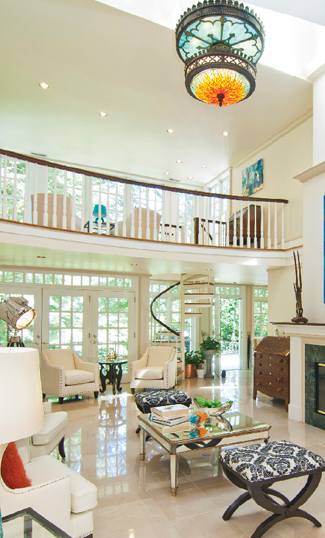 River Run
$5,495,000
Westport
Once owned by Frances Gershwin, the composer’s sister who was married to an inventor of Kodachrome film, this circa-1950 home entertained musicians and actors, including, it is rumored, neighbor Paul Newman. Rumor also has it that actress Maureen O’Sullivan—Tarzan’s leading lady—rented it at one point, which would have brought her daughter, Mia Farrow, and Farrow’s one-time husband Frank Sinatra to the party. Whoever’s on the guest list, there’s plenty of room for entertaining on the nearly three-acre riverfront grounds that feature a lake, a koi pond, two waterfalls, a natural plunge pool and a tennis court. And while the 12,000-square-foot home looks more traditional from the outside, the interiors are dazzlingly contemporary. Especially dazzling is the central atrium with 30-foot ceilings and the indoor swimming pool and lounge area around it. In the main house there are seven bedrooms and seven bathrooms (plus three half bathrooms) with an additional two bedrooms and bathrooms in a guest cottage. Lisa Jones of Higgins Group Real Estate in Westport has the listing. 203-218-6664. 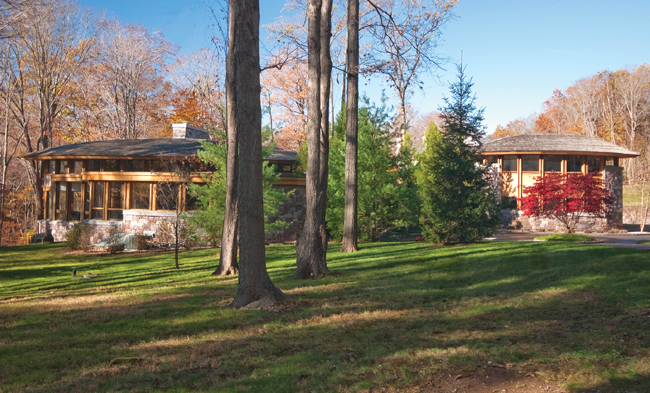 New Canaan Modern
$3,995,000
This fab home was built in the very heart of the hotbed of modernism—just a short drive from New Canaan’s town center. Built by one of Frank Lloyd Wright’s head architects, John Howe, in 1981, it’s bigger than many of the town’s mid-century houses, measuring more than 7,000 square feet, and offering five bedrooms, five full bathrooms and two half bathrooms. It was entirely renovated in 2007, so it also offers an updated kitchen with top-of-the-line Wolf appliances and a guest wing, along with new heating and cooling systems. On the seven-acre grounds: terraces, tennis courts and lovely landscaping. Rita Kirby of William Pitt Sotheby’s International Realty in New Canaan lists the home. 203-984-7665. 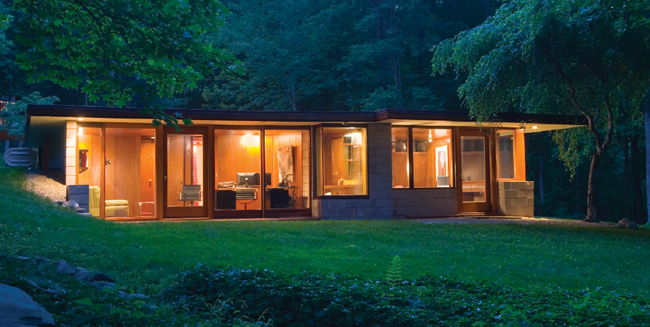 Weston Mid-Century Modern
$1,588,888
Allan J. Gelbin, another apprentice to Frank Lloyd Wright, built this tiny treasure in 1965 on 2.24 pretty, private acres. At just 1,560 square feet, the meticulously restored home adheres to the modernist manifesto of streamlining living spaces and bringing the outside in. The current owners have done this place proud by showcasing fixtures and furnishings that were designed for the house including a screen, a painting and a lamp. There are two bedrooms and two bathrooms, but its open plan and window walls make the place seem larger than conventional homes twice its size. Susan Blabey of William Pitt Sotheby’s International Realty in New Canaan has this listing. 203-979-7774. 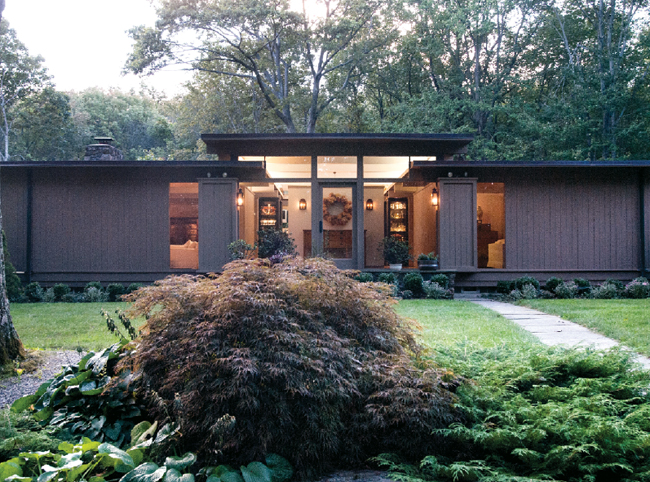 Redding Mid-Century Modern
$869,000
What a house! What a price! On 6.39 acres in bucolic Redding adjoining the 1,000-acre Huntington State Park, this circa-1960 modern is beautifully sited with Japanese-style gardens and stone terraces all around it. The 2,000-square-foot open-plan interiors start with a double-height foyer space. The renovated chef’s kitchen and dining area flow into the large main living area with a stone fireplace and glass doors that step out onto a terrace. In all, there are three bedrooms and three bathrooms (plus one half bathroom). There’s also a newer barnlike guesthouse with a great room, kitchenette, bedroom and bathroom. Michael McKee and Inger Stringfellow of William Pitt Sotheby’s International Realty in New Canaan share the listing. 203-249-9565 and 203-321-9361.