In honor of our magazine's ninth birthday, we've gathered up the market's most grand, gorgeous—and giftable—listings. Grab them before they're gone!

in honor of our magazine’s ninth birthday, we’ve gathered up the market’s most grand, gorgeous—and giftable—listings. Grab them before they’re gone!

Location, Location Many fine old manses still stand in the mansion district of Ridgefield, including this circa-1900 home, listed for $4,299,000 with the Power Team with the Coldwell Banker offices in Redding/Georgetown. 203-544-9591.

Ridgefield Estate
$4,299,000
Most of Ridgefield represents Connecticut at its quaintest—which is saying a lot, as “quaint” is what our state does both well and often. Indeed, Ridgefield’s charming and cozy town center has been given the “best Main Street” award for its antique buildings, now housing chic design shops (Olly Court is a favorite), boutiques (Lucy’s) and bistros (Bissell House). Within walking distance to town, High Ridge Avenue and Peaceable Street comprise a jaw-dropping mansion district, graced with one grand old home after another, including this glamorous, circa-1900 shingle-style manse on High Ridge. The three-acre property starts with the 7,520-square-foot main house, wrapped all around by covered porches and offering five bedrooms and nine bathrooms. On the grounds: a mosaic-tiled pool, a pool house, a tennis court and a caretaker’s cottage that can be used as a rental property. The Power Team with the Coldwell Banker offices in Redding/Georgetown has the listing. 203-544-9591.

It’s news to no one that fixing flaws and decluttering rooms should be on every seller’s punch list. But staging is just as crucial for never-lived-in or otherwise unoccupied homes, which can feel cold, echoey and even puzzling to potential buyers. “When we first started showing the house with empty rooms, buyers felt confused as to where furniture would go and how the spaces would be used,” says Realtor Leslie Smith Clarke of a fabulous new-construction home in the desirable Old Hill neighborhood in Westport. Enter stager Meridith Baer who furnished, accessorized and otherwise enhanced the 6,800-square-foot interiors of the listing pictured here—with stunning results. Designed by Wormser + Associates Architects, the shingle-style home is listed for $2,749,000. Call Clarke, of William Raveis Real Estate in Westport, for a showing at 203-984-1856.

Watercolors Reflecting the autumn sky, this property’s water views are lovely at this time of year. The home is sited along Gorham’s Pond and Goodwives River Road, with vistas over Long Island Sound. Hazel Durham of William Pitt Sotheby’s International Realty has the $4,250,000 listing. 203-253-6972.

Coastal Manor
$4,250,000
Darien
Just about any home on lovely Goodwives River Road is impressive, given the views over the water and onto Darien’s landmark Rings End Bridge. But this European manor-style property is stunning, sited on its own peninsula and along the shores of Gorham’s Pond. The 5,125-square-foot home opens onto a two-story foyer that leads to the kind of space buyers covet these days: a deluxe kitchen (designed by Deane, Inc.) that’s adjacent to a welcoming family room with its own floor-to-ceiling stone fireplace. Also much coveted is the flexible-use first-floor bedroom with an ensuite bath that can be converted into a home office if desired. On the second floor is the master suite with a private sitting area, as well as two ensuite bedrooms. Additional amenities: a 2,000-bottle wine cellar and a launch for a small boat or kayak. It’s listed with Hazel Durham of William Pitt Sotheby’s International Realty. 203-253-6972. 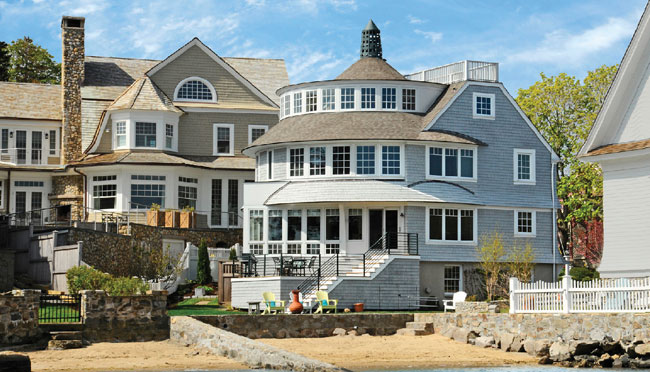 Bell Island Home
$2,595,000
Rowayton
Roger Bartels of Bartels Pagliaro Sajda Architects has lived and built in Rowayton, and this circa-1999 home is among his most appealing, designed to take advantage of its views over Wilson Cove and the busy, bucolic boating scene afforded by the two yacht clubs, also in view. There are walls of windows throughout the 2,814-square-foot interiors, including in the master suite. The home also offers two additional bedrooms and four bathrooms. Simply put, if this house were sited any closer to Long Island Sound, it would be a houseboat. The .14-acre property also offers a sandy beach, a private dock and mooring access. It’s listed with Isabelle Morrison of Coldwell Banker in Greenwich.
203-249-8989.

Island Style Called the Island House, this circa-1953 home was built by Bimel Kehm in New Canaan’s mid-century modern district. Its open floor plan has window walls onto a bluestone terrace and pretty pool. Inger Stringfellow of William Pitt Sotheby’s International Realty lists it for $1,650,000. 203-321-9361.

The Island House
$1,650,000
New Canaan
This pristine, circa-1953 modern was built by artist/sculptor/architect Bimel Kehm in the heart of New Canaan’s mid-century modern enclave, not far from Philip Johnson’s Glass House and the gloriously restored homes designed by the other Harvard Five architects, including John Johansen and Marcel Breuer. This residence, too, has been beautifully updated, but without significant alteration to the original design. The kitchen appliances are new (and top of the line), for instance, as are the honed, black-granite countertops. Like so many mid-century moderns, the interiors are open plan, with window walls onto nature and easy access to the bluestone terrace and curving Gunite pool. Story goes that it was once home—at different times—to Jack Douglas, who was a comedy writer for Jack Parr, and to a Norwegian au pair who would marry a Rockefeller scion. Inger Stringfellow of William Pitt Sotheby’s International Realty has the listing. 203-321-9361. 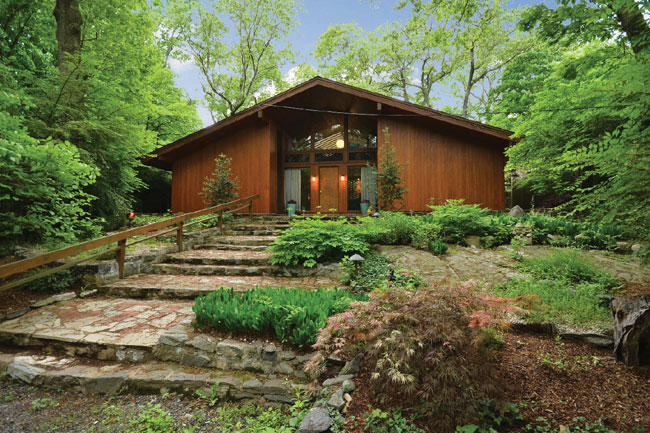 Modern Master Architect Edward Durell Stone designed this home in 1954 for its lovely, landscaped lot in the Tokeneke section of Darien. It offers four bedrooms and two bathrooms, as well as a greenhouse. It’s listed for $1.6 million with Mary Lopiano of Halstead Property in Darien. 203-912-4694.

Edward Durell Stone home
$1.6 million
Darien
Architect Edward Durell Stone designed Radio City Music Hall, the Museum of Modern Art and the Kennedy Center—along with several homes in Fairfield County, including this one, located in the exclusive Tokeneke section of Darien. Stone was an innovator who introduced new ideas to American housing. For this circa-1954 home, he designed brick latticework, a Koi pond and sliding shoji screen doors. The 2,334-square-foot house also offers four bedrooms and two bathrooms, and on the landscaped grounds are a greenhouse and a hot tub. It’s listed with Mary Lopiano of Halstead Property in Darien. 203-912-4694.