Brokers report spending more time outside this month as buyers explore their listings' exterior pleasures—strolling garden paths, rambling across lawns and wandering along the water's edge.

Brokers report spending more time outside this month as buyers explore their listings’ exterior pleasures—strolling garden paths, rambling across lawns and wandering along the water’s edge. Homes with exterior amenities definitely have an edge in May, which is why we’re featuring these five fabulous listings and their gardens, arbors, pergolas, terraces and outdoor “rooms.”
Happy spring! 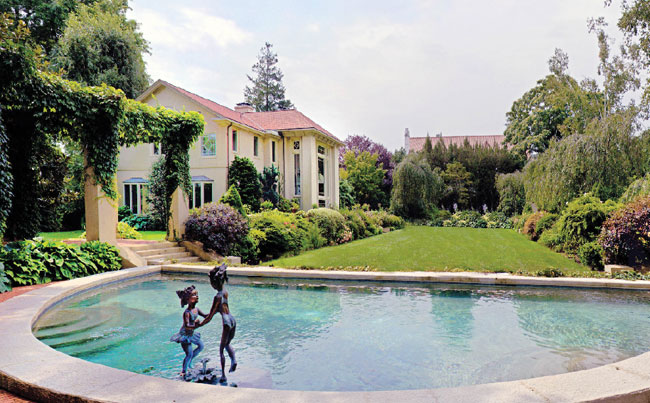 Le Jardin Bleu
$4,499,000
Westport
At the turn of the last century, Frederick Law Olmsted—whose credits include Central Park and the U.S. Capitol Building grounds—designed the gorgeous gardens gracing this property, as commissioned by the Texaco Oil Company exec who once owned it. The estate would change hands several times, purchased next by William Black, the Chock Full o’Nuts founder who also helped found what  is still called the Bluewater Hill Association around it. Black then deeded the place to his mistress, or so the story goes, and in 1976, the Mediterranean manse that stands today was erected after the original lot was divided. Dubbed Le Jardin Bleu, the 3,674-square-foot home offers four bedrooms and three bathrooms (plus one half bathroom), including a master suite with views over the water and a luxe master bath. Along with the hundreds of perennials now in bloom, the one-acre grounds feature a crescent-shaped pool encircled by a dramatic, colonnaded pergola, as well as direct access to a private beach. Jillian Klaff of Jillian Klaff Homes at William Raveis Real Estate in Westport lists the property. 203-858-2095. 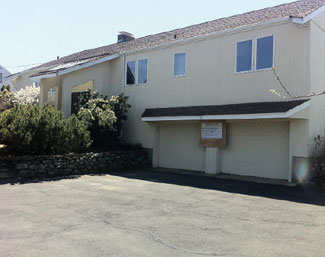 They’re both considered positive market indicators, although one can result in the destruction of our state’s heralded, heritage housing stock. And both are impacting Connecticut’s real estate market for the first time in years. The first is what brokers call inventory shrinkage, as measured by a decrease in the “months of supply” statistic that calculates the duration of time it would take to exhaust the supply of for-sale homes if no new listings were added. Until very recently, that figure was bloated, with too many new listings added to the inventory of old, unsold homes. Today’s strongest numbers are coming from Darien, where the “months of supply” decreased 41 percent to a healthy 6.8, while Norwalk and Redding posted decreases in their months of supply figures by 40 percent and 18 percent, respectively. Sadly, in some cases, developers are also feeling so bullish about the market’s nascent recovery that they are taking on the considerable expense of tearing down homes to build new, spec homes. Both Westport and New Canaan are bustling with wrecking-ball crews this spring. Pictured here, a Westport home whose owners have applied for a demolition permit; it was purchased in August for $2 million, per westportnow.com. 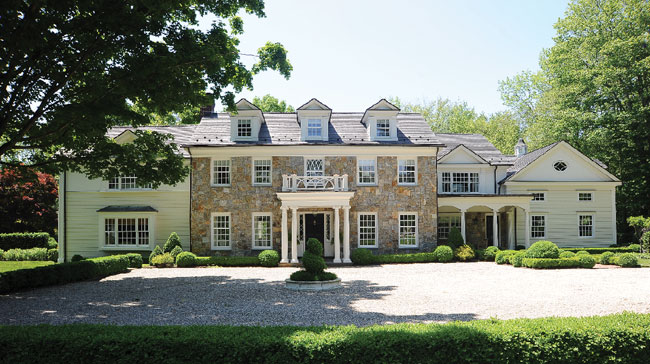 Greenfield Hill Home
$3.1 million
Fairfield
It’s often said that the Greenfield Hill neighborhood looks like what people think of when they think of Connecticut: stately, antique Colonials, old stone walls, meadows, woods, and this time of year, acres of daffodils and dogwoods. And this home fits that picture perfectly, with the added attraction of its completely renovated, 6,300-square-foot interiors. A Realtor and interior designer owns the home and directed the renovation of the now five-bedroom, seven-bathroom (plus a half bathroom) home on four acres that also offer a pool and a pool house with a full kitchen, glorious gardens and a barn. Bonnie Paige with William Raveis Real Estate in Southport has the listing. 203-331-7512. 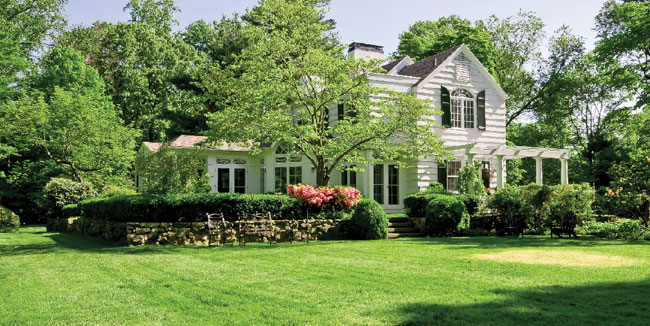 Darien Estate
$2,550,000
This circa-1930 home was originally called Dingly Dell Farm, a 35-acre spread built by a Scottish architect, complete with a pond, stone walls, apple trees and formal gardens. Now on 2.3 acres, the estate’s outdoor amenities include mature gardens, a fish pond and a winding drive lined with pretty trees and hedges. From the outside, the nearly 5,000-square-foot main house has the air of a Southern manse with its stately columns, but has thoroughly modern interiors with large, airy rooms, including five bedrooms and four bathrooms (plus one half bathroom). It’s listed with Hannah Burge and Nan Peter of Kelly Associates Real Estate in Darien. 203-621-0967. 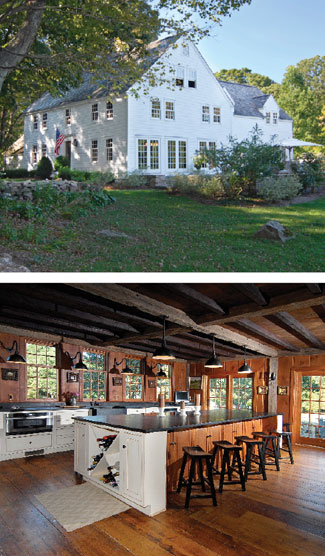 Equestrian Estate
$2.5 million
Lyme
Built in 1736, this pristine clapboard Colonial, renovated and expanded in 2006, now offers 6,000-square-foot interiors that beautifully blend the old with the new. There are open-plan common rooms on the first floor featuring rustic post-and-beam framing, three grand fireplaces and wide-plank Black Spruce floorboards salvaged from a chapel in Nova Scotia. The new kitchen offers top-of-the-line amenities including soapstone counters, Wolf appliances, a pantry and an expansive island. There are also five bedrooms, including a master suite with a soapstone shower and soaking tub. But this time of year the exterior amenities shine brightest. On the property’s 46 acres find a pool, a blue-stone terrace and a spring-fed pond, along with a 12-stall horse barn and a dressage ring. It’s listed with Joe Rhodes of Coldwell Banker in Old Lyme. 860-227-0921. 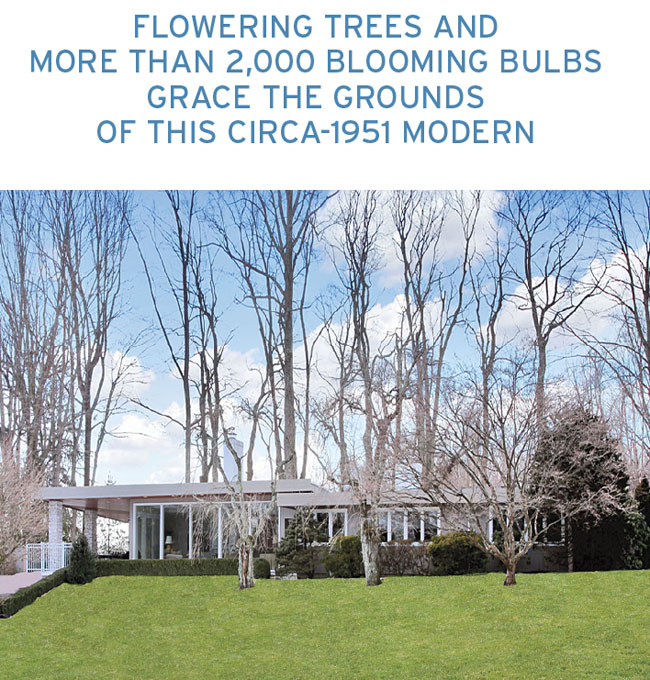 Burr Farms
$1,898,000
Westport
This low-slung, circa-1951 Modern is sited on 1.42 acres featuring flowering trees, more than 2,000 blooming bulbs and a covered marble patio—perfect for outdoor entertaining—that steps down to a pool, terrace and pool house. The home’s great room is, truly, great, thanks to floor-to-ceiling windows overlooking the gardens, a stone fireplace, sleek marble floors, an elegant coffered ceiling and wet bar with a hammered sink. The great room flows into the dining area and a glass-walled solarium with skylights to let in yet more dazzling light. The master suite is sweet indeed with another fireplace and a luxe bathroom with a steam shower and Jacuzzi tub. The 3,870-square-foot home also offers an additional four bedrooms and a total of four bathrooms. It’s listed with Michelle & Company in Westport. 203-454-4663.