Connecticut's homes tend to be rich in history. So for our coastal collection of listings, we chose houses that have been lived in by notable people, including artist Helen Frankenthaler, playwright Larry Kramer and novelist F. Scott Fitzgerald.

Connecticut’s homes tend to be rich in history. So for our coastal collection of listings, we chose houses that have been lived in by notable people, including artist Helen Frankenthaler, playwright Larry Kramer and novelist F. Scott Fitzgerald. In keeping with this issue’s theme, the listings also offer lovely “living on the water” settings—along beaches, lakes and luxe pools that make you want to dive right in! 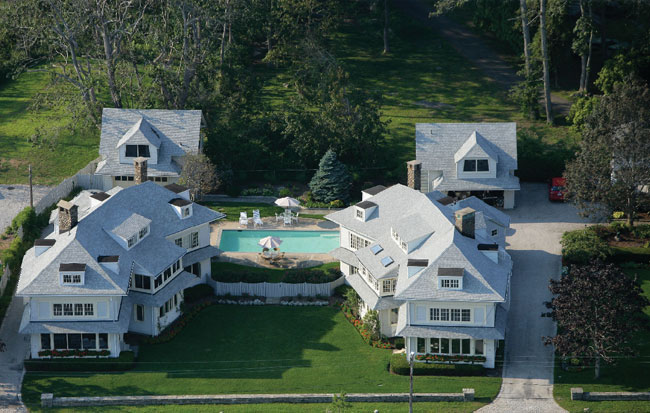 Madison Compound
$10 million
It’s not often that a $10 million Madison listing pops on the market. And it’s also uncommon that a property as expansive as this one is offered. Simply put, the circa-1917 compound features at least two of everything: two grand, 4,500-square-foot “cottages” (plus a smaller home and carriage houses) and two waterfront acres that also offer a pool and tennis court. Story goes that architect Herbert C. Wise, who was also the founding editor of House & Garden magazine, drew up the plan for the first dwelling then flipped it over to create its mirror image next door. The property expanded over the years as the owner—a General Motors president—purchased a neighboring house to accommodate his adult children and their children. Between the two main cottages there are 17 bedrooms with an additional four bedrooms  in the smaller home and yet more sleeping quarters in  the carriage houses. Wherever you rest your head—and there are a lot of choices—you’ll sleep with the sound  of the surf in your dreams: The 500 feet of private beach are just steps away. Margaret Muir of William Pitt Sotheby’s International Realty in Madison has the  listing. 203-245-6700.

New Heights
Last month, a record was set in Greenwich for the highest price for a home ever listed in the U.S., according to the Wall Street Journal. The price tag: $190 million for a 50-acre estate with 4,000 feet of private waterfront along Long Island Sound, on a property that includes two private islands. Once home to Harriet Lauder Greenway, the daughter of a U.S. Steel honcho, the property is called Copper Beech, in honor of the large trees on the grounds, which also feature formal gardens, two greenhouses, a 75-foot-long pool, a pool house, an apple orchard and—as a special thrill for those of us who find ourselves glued to Wimbledon coverage this month—a grass tennis court. The main house is an imposing, 12-bedroom Victorian with a stone façade and twin turrets. David Oglivy of David Oglivy & Associates in Greenwich has the listing. 203-869-9866. 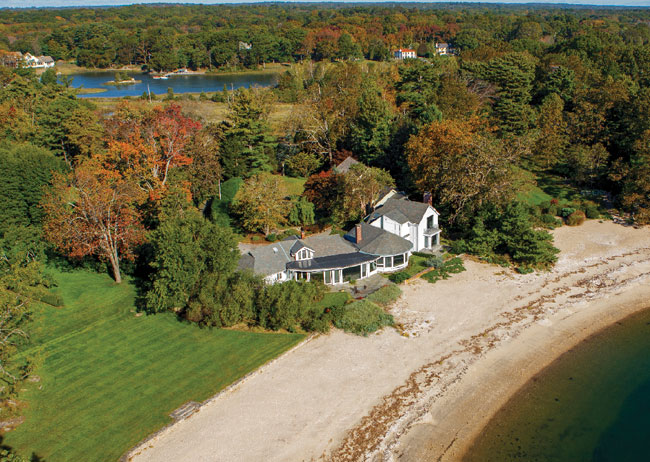 Painter’s Estate
$6,995,000
Darien
Do we sense a pattern here? This Darien compound also doubles down on its amenities, offering two master suites in the main house as well as a second dwelling—a two-story artist’s studio built for the painter Helen Frankenthaler. The 8,274-square-foot main house is a stately, brick-and-shingle residence built in 1963 to take advantage of the open views over the private beach and Long Island Sound. The 1.16-acre property, located in tony Tokeneke, also offers a stone terrace, multiple decks and pretty gardens. It’s listed with Liz Harnisch of William Pitt Sotheby’s International Realty in Darien. 203-984-9545. 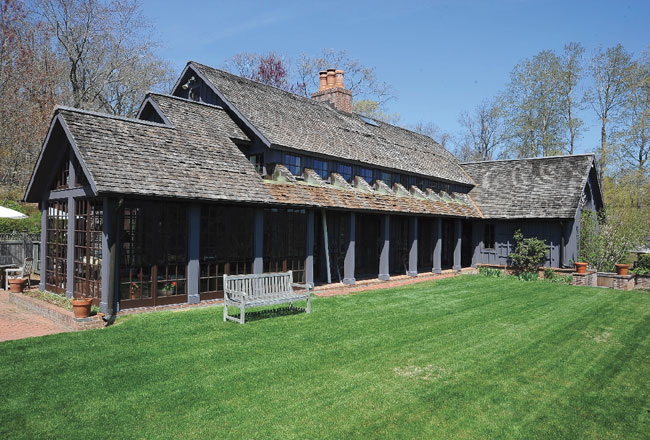 Lake Waramaug Barn Home
$3.5 million
Warren
This 15-acre spread belongs to playwright and AIDS activist Larry Kramer and his long-time partner David Webster, the architect who remade the circa-1977, barn-style home into the glorious retreat it is today. While the post-and-beam interiors are impressive, the real wow factor is in the 180-degree views over the lake and Litchfield Hills. The lawns and gardens are terraced around the home and feature an expansive brick patio with a “croquet lawn” and a pool with a cool cabana. Inside, the rooms have the lofty feel of a barn with exposed beams, barnboard paneling and walls of windows. In all there are four bedrooms, six bathrooms (plus one half bathroom), offices and a media room. Stacey Matthews of The Matthews Group with William Raveis Real Estate has the listing. 860-868-9066. 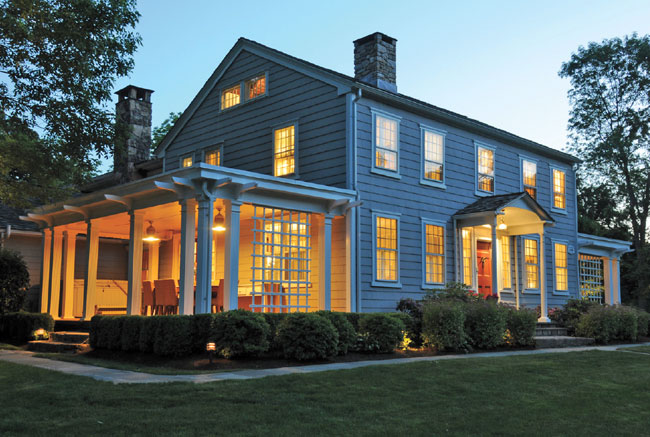 The F. Scott Fitzgerald House
$2,850,000
Westport
For six months in 1920, F. Scott Fitzerald and his glamorous bride, Zelda, rented what was called the Wakeman Cottage in Westport for six months. Legend has it that the newly married couple, ages 23 and 19 at the time, had worn out their welcome in the Manhattan hotel rooms they inhabited and decamped to Westport for the summer. Fresh off the success of the novel This Side of Paradise, the Fitzgeralds threw wild parties on the beach, “took mad rides along the Post Road with abrupt stops at roadhouses to replenish the supply of gin,” and generally shook up the quiet little town, according to biographer James Mellow. Last month, as Gatsby fever reignited with the release of the remake, this circa-1758 Compo farmhouse hit the market, beautifully renovated with a layout conducive to modern-day entertaining (gin-soaked or otherwise). It has a gorgeous, open kitchen that opens onto a family room with a fireplace, three covered porches, a pool and patio and—the novelist would approve—a professionally installed wine cellar and tasting room. The one-acre property is sited near the entrance to Longshore Country Club and is a bikeable distance to Compo Beach. It’s listed with Michelle & Company in Westport. 203-454-4663. 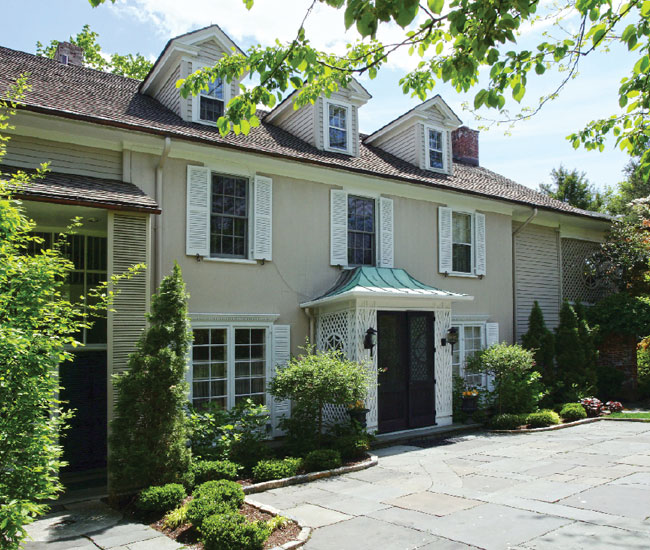 Rose Cottage
$2.5 million
Bridgeport
The market’s heating up in Bridgeport’s St. Mary’s by the Sea section, bounded by Long Island Sound and the Fairfield town line, and serviced by the new Fairfield Metro train station, with a 70-minute ride into Grand Central. The Gold Coast doesn’t extend to Bridgeport though, so housing prices are lower than in posher towns to the south. Built in 1895 when Black Rock was considered posh, this so-called “cottage” was once part of the swanky George Hotel, a complex of cottages rented out to Manhattanites for the summer season. After the hotel closed, Rose Cottage was moved and, over the years, added onto: It’s now an elegant, 6,600-square-foot mansion on two parcels, the second of which offers a swimming pool and an antique barn with guest quarters. It’s listed with Ruth Madwed of William Raveis Real Estate in Southport. 203-255-6841.