September marks the start of the autumn selling season, which comes on the heels of better-than-expected summer sales. From a New Canaan chateau to an Ellington contemporary we've got the listings here. 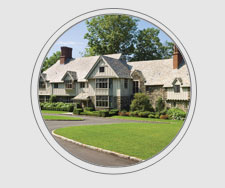 A recent report released by the University of Connecticut’s Center for Real Estate and Urban Economic Studies reveals that the statewide market has stabilized. Even while Connecticut posted an uptick in unemployment, the housing market showed strong gains in many markets, especially in the Norwich-New London areas, where single-family home prices increased by about 15 percent in the second quarter of 2012. Greenwich helped to boost overall sales figures with some really big deals over the summer. A bluffside Byram Shore Road home (featured in CTC&G’s May 2012 “Deeds & Don’ts” column), designed by modern master Paul Rudolph, sold in June for $12 million, just a drop off its asking price of $12,495,000. Also featured in this column was a gorgeous North Street Tudor Revival home called Nor-Tor, renovated by its Realtor-owner and sold in June for $11.5 million.

September marks the start of the autumn selling season, which comes on the heels of better-than-expected summer sales. Realtors report other indicators that are much more positive than the gloomy national housing market data: There’s been brisk traffic, an openness to more realistic pricing on the part of the sellers, and some impressive sales (see “Good News,” right column). Here’s to a busy and prosperous fall for all. 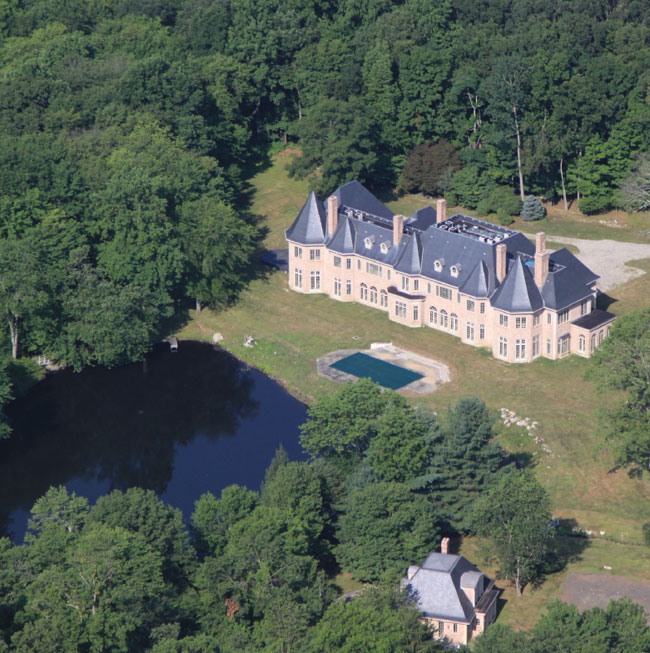 New Canaan Chateau
$4,950,000
The scale of this brand new 15,000-square-foot estate is, in a word, jaw-dropping. The couple that built it incorporated features found in a real French chateau, including multiple turrets, a gleaming slate roof and a 35-foot-high entrance hall with a skylight comprised of 32 individual window panes. On the ground floor, there is more grandness: two barrel-vaulted galleries, French doors opening onto a European-style courtyard from the parlor and a two-story library with a circular staircase descending to a wine-tasting room. Likewise, the master suite is truly masterful, featuring two fireplaces, a sitting room with a wet bar, a terrace off the master bath and elaborate his-and-her closets with an upper-level space for storing out-of-season clothing. If the less-than-$5-million price tag seems low, that’s because the interiors still need finishing—the new owners will be able to customize colors and surface treatments and otherwise complete construction. On the 6.6-acre grounds, there are sites for a swimming pool and tennis court, as well as an already constructed one-bedroom cottage with a full kitchen and a fireplace. Ileana Barns-Slavin of William Raveis Real Estate has the listing. 203-246-7215. 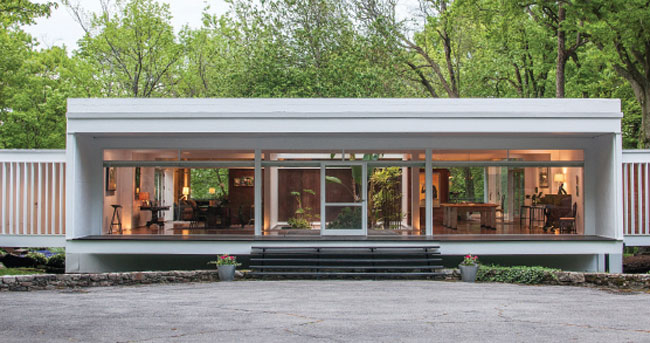 Goodyear House
$2,795,000
Darien
We’re not supposed to play favorites, but this circa-1955 modern had us at hello. Called the Goodyear House, it was built by the sole surviving member of the architects known as the Harvard Five—John Johansen designed it for a Harvard classmate named Goodyear (not of tire and rubber fame). With more than 6,000 square feet, the house is larger than many of the mid-century homes and exemplifies Johansen’s fascination with Palladian styling. The heart of the home is a nearly transparent central pavilion that is cantilevered over the foundation, appearing to float above it, as if by magic. There are also two flanking pavilions connected to the core by bridges and a series of beautiful decks and terraces overlooking the 2.24-acre property. And unlike some moderns, this one makes for a great family home, with six bedrooms, four bathrooms (plus two half bathrooms) and a large playroom on the lower level. The listing is shared by Inger Stringfellow of William Pitt Sotheby’s International Realty in New Canaan and Nancy Dauk of Halstead Property in Darien. 203-321-9361 and 203-858-1146. 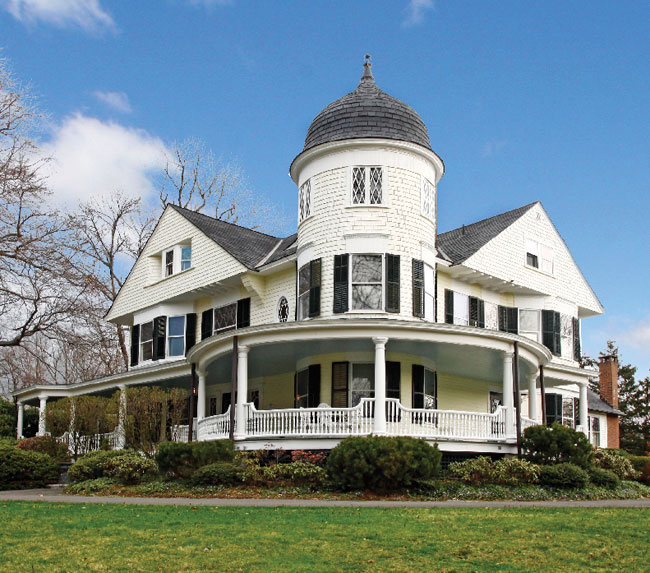 In this elegant Ridgefield Victorian, a turret houses the master bedroom


Tower Cottage
$1,949,000
Ridgefield
Ridgefield enjoyed its own housing boom in the late 1800s when New Yorkers started building summer homes in and around this pretty town. The ornate Victorians that sprung up along Main Street and surrounding streets are still on view today, which makes for an extremely pleasant way to spend a September Saturday, strolling among them, browsing the boutiques on Main and ending up at Luc’s, a cool bistro just off Main. Through the years, notable Ridgefield residents have included publisher E.P. Dutton, sculptor Frederic Remington and, currently, cartoonist Roz Chast. This circa-1890 Victorian was once home to Jackie Kennedy Onassis’ uncle and aunt (John Davis and his wife), and young Jackie vacationed here, The Wall Street Journal reports. Recently restored, the antique fixtures and details and the configuration of the rooms have been retained. For example, there are two parlors—one for men and one for women—and a massive turret that houses the master bedroom. In all, there are eight bedrooms, four bathrooms and one half bathroom. On the 1.65-acre property is a lovely pool and terrace, on view from the wide and welcoming wraparound porches. Paul Rabstein and Jack Lehman of Coldwell Banker have the listing. 203-431-0433. 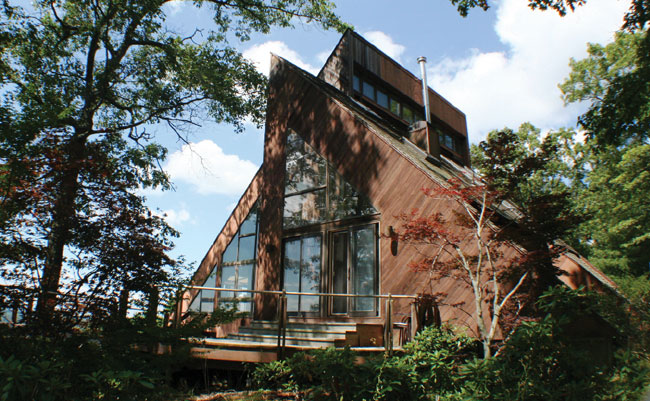 Ellington Contemporary
$1.7 million
The little town of Ellington is in what’s called the Quiet Corner of our state—northeast of Hartford where horse properties and summer camps abound. This cool contemporary sits on a nearly 100-acre spread that also features two meadows, two ponds and a private heliport. Built in the 1980s, the dramatic exteriors are an interpretation of the classic A-frame with soaring window walls offering unbroken views of mountains, woods and sky. Inside, the drama continues on three stories with views from top to bottom, a stylish kitchen, a stone hearth and loads of decks and terraces. Mariette Woolfson of William Pitt Sotheby’s International Realty in Essex has the listing. 860-883-3667. 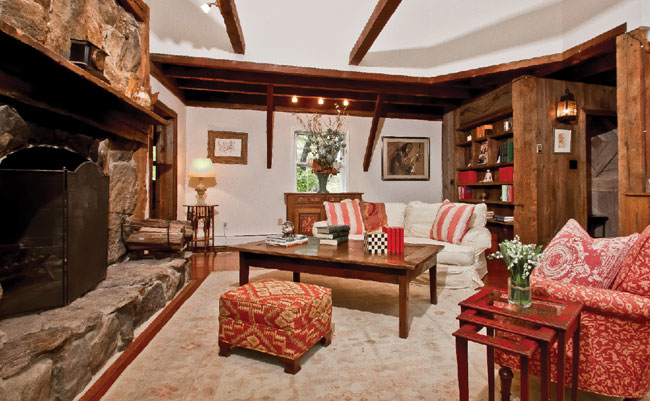 Westport Barn-style Home
$1,189,000
Originally constructed in 1920, this fabulous home was once owned and renovated by Westport architect Michael Greenberg. The 3,330-square-foot interiors feature the handsome materials most commonly associated with barns: rustic wood walls, barnstyle doors, rugged stone hearths and exposed ceiling beams. But there’s an elegance to its earthiness as well. We love the pretty, all-white kitchen, the French doors that open onto a lovely terrace and the sunroom with its red-lacquer floorboards. In total, there are four bedrooms and three bathrooms, plus one half bathroom. Julie Walsh of Coldwell Banker in Westport has the listing. 203-227-1269, extension 231. 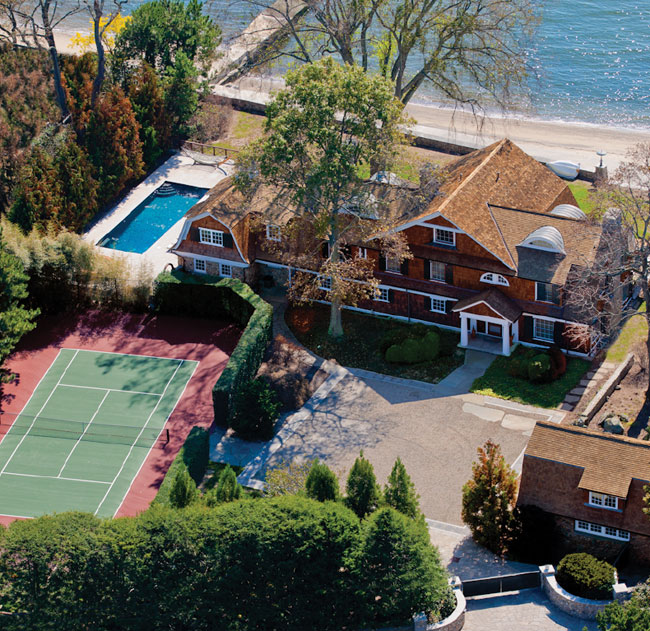 Southport Compound
$12.9 million
There’s a story behind this nearly 10,000-square-foot stone-and-shingle home. It started life at the turn of the last century as a Dutch Colonial seaside cottage. Age has its privileges: Its first owners grabbed a spectacular stretch of private waterfront, now measuring 200-plus feet. The home was renovated in 2008, retaining some of its charming antique details—there are brick-faced fireplaces in the bedrooms, for instance—but also enhanced with top-of-the-line fixtures and furnishings. The kitchen has a 60-inch Wolf range, two refrigerators, a wood-burning pizza oven, and two walk-in pantries. The master suite has a private deck, a fireplace and a glorious spa bathroom featuring a sauna and a freestanding copper-and-nickel “slipper” tub, positioned with views over Long Island Sound. In all, the interiors offer five bedrooms and eight full bathrooms (plus one half bathroom). On the 1.37-acre grounds: a tennis court, expansive stone terraces with a pool, and pretty lawns overlooking the water. It’s listed with M & D Properties, affiliated with Coldwell Banker in Westport. 203-227-8427.