Inside the Airy East Hampton Home of Architect James D’Auria 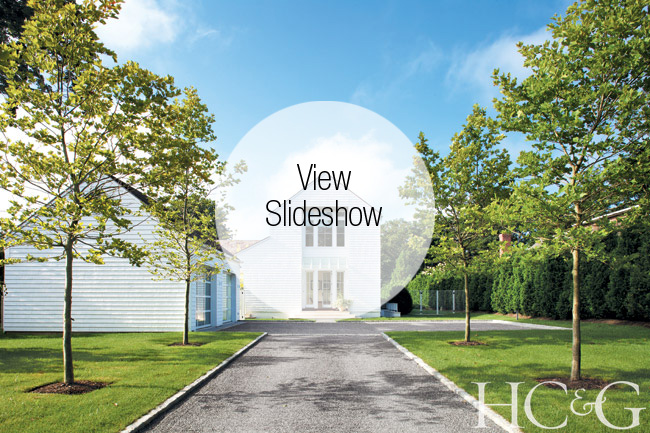 Architect James D’Auria and his wife, Jennifer, a real estate agent, lived for some 15 years in a home James designed on a bucolic plot of farmland in Amagansett. When he built the house, a shingled but modern-inflected structure that references the East End’s barn vernacular, the couple also had a place in Manhattan. But they were spending so little time in town, they eventually gave it up.

“When we had the apartment in the city,” says Jennifer, a former soap opera actress, “the contrast between the Amagansett house and New York was so extraordinary—the house was so peaceful.” But both D’Aurias started to miss certain things about city life. “We began to want to be more in the middle of things,” says James, “to be able to walk to dinner or a movie.”

Both went about their professional lives—James, a native of Brooklyn, building homes on Long Island, and Jennifer, who is originally from Cardiff, in Wales, selling real estate for Halstead. Then she found the property: a long, narrow lot in the heart of East Hampton Village that had just come on the market. “There was a small house occupied by a widow in her 90s,” Jennifer says, “and it was wildly overgrown.”

She called James on the spot and said, “I’m coming to pick you up.” He demurred, saying he was too busy at work, but Jennifer persisted. They made the deal immediately, and their new home began to take shape. First, it would be smaller than their Amagansett digs: two stories and four bedrooms, built, as James says, in the tradition of East Hampton houses, but modernized both for their personal taste and contemporary lifestyle. Because the lot is deep and narrow, 83 by 383 feet, it would align with the plot’s long north-south axis.

So what is it like for an architect to design for himself as a client? “The biggest worry,” says James, “is that you’re really out there as an architect. You’re completely open to criticism, and you can’t hide behind a client and say someone made you do something. Besides, Jennifer was the client, and she’s a tough one!”

James took the architect/client relationship with his wife seriously. “I did presentations and design boards, and we made all the decisions together,” he says. “It’s basically the way he works with all his clients,” adds Jennifer. “He’s very thorough. And I trust his taste and judgment, so I usually gave in when he objected to anything I suggested. It was a wonderful experience.” Not only that, the project came in on time and on budget.

High on the wish list for the new house were an open-plan kitchen and dining area and a relatively open-flow living room, although they wanted some division between those two areas. James set the living room at a right angle to the kitchen/dining area and separated them with a double-sided fireplace. The master suite lies beyond the kitchen on the ground floor. There are three guest rooms upstairs and a large studio for James in the basement.

To maximize light, the two longer walls of the living room are primarily glass. One set of French doors opens onto a covered patio overlooking the pool, the other onto a decorative courtyard planted with four ginkgo trees. “The French doors took some figuring out,” says James. “I wanted them to look more modern than customary. Small windowpanes made them look too traditional, but a single expanse of glass in each door seemed to lack character, so I settled on fewer, larger panes as a bridge between the old and new.”

The entire interior of the house is done in tone-on-tone white, from the painted walls to the wide-plank floors, which consist of old-growth heart pine slightly whitewashed and waxed (to prevent darkening over time). To add texture to his narrow palette, James added woodwork—bookshelves, doors, and frames—fabricated from Douglas fir, heavily wire-brushed to bring out its deep grain. By contrast, the custom kitchen cabinetry is high-gloss enamel.

Furnishings in the new house are more modern than in their former one. “It was fairly modern in Amagansett, too,” says Jennifer. “We had Christian Liaigre sofas, for example, but we also had more antiques, more wooden pieces. We had a 1928 GE refrigerator that we rewired for the kitchen, and that set a bit of a rustic country tone.” The buyer of that house wanted the contents, too, so the D’Aurias took the art and a few antiques and left the rest behind.

The new home also has a Liaigre living room sofa, along with some 20th-century classics, pieces by “my favorite architects, Mies van der Rohe and Le Corbusier,” says James. “I first saw them when I was a student at Pratt in the late ’60s and always dreamed of owning them.” What both husband and wife like most about the house is the easy flow from indoors to out. “There are doors everywhere,” Jennifer says, opening from all the rooms, including the master suite, onto the deck or the ginkgo courtyard. Outside, a stark white pergola runs parallel to the pool. James explains that he “wanted a traditional pergola feel, but not a traditional structure. So I kept it much simpler than I would at a more rustic or historic home.” Still, the D’Aurias couldn’t resist planting wisteria. “It’s going to take forever to grow,” James says, “but Jennifer doesn’t seem to care how long it takes.” “There isn’t one thing I’d do differently here,” says Jennifer. “I love this place, and I am never leaving.”

A version of this article appeared in the August 15 2015 issue of Hamptons Cottages & Gardens with the headline: White & Airy.