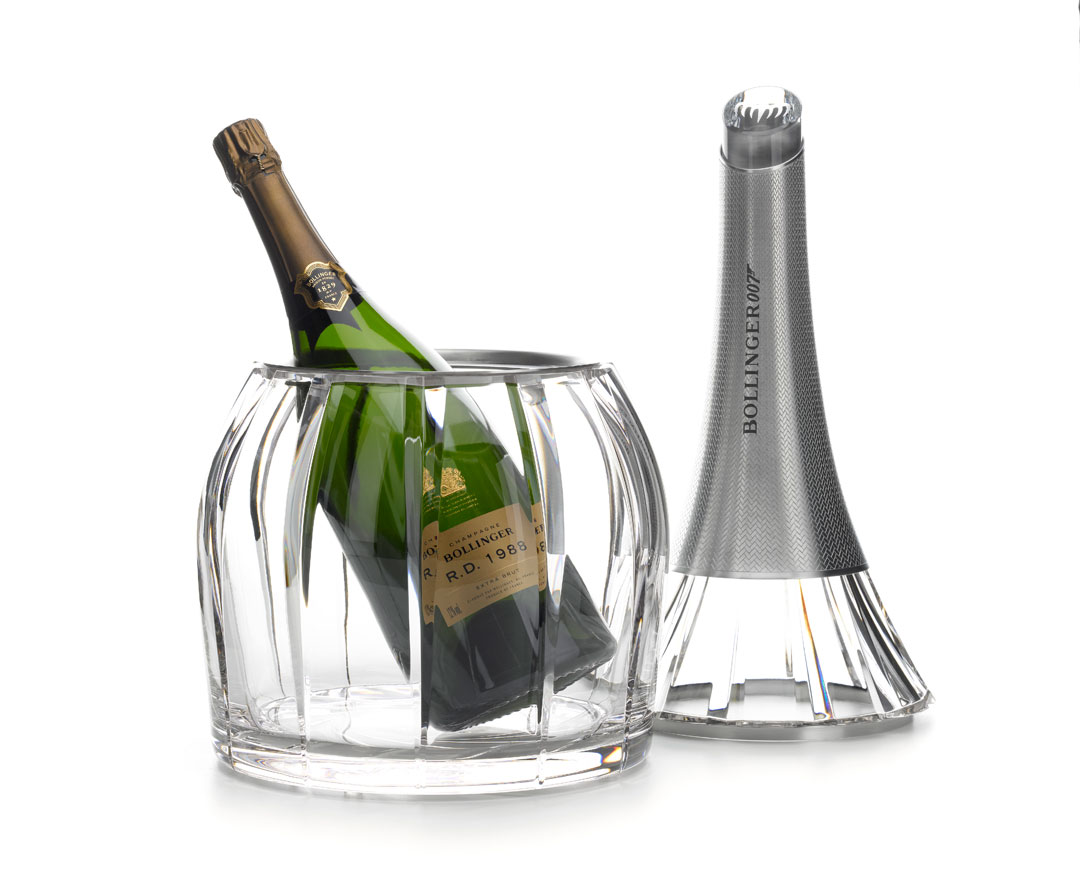 Every fall the Champagne producers descend on Manhattan to show off their new vintages just in time for holiday coverage. It’s an embarrassment of riches with these perfectly aged cuvées, both brut and rosé—catnip for Champagne lovers like me.

One of the rare family-owned houses in business in the village of Aÿ since 1829, Bollinger has been known for Pinot Noir dominant blends. Bollinger owns and farms 400 acres of mostly Grand Cru and Premier Cru vineyards and continues the practice of hand-riddling. It’s notable for long aging its reserves wines in magnums under cork with calling cards being the Special Cuvée, La Grande Année, R.D. and Vieilles Vignes Françaises. James Bond has been a fan since 1973.

Journalists were welcomed with flutes of Bollinger Rosé—the rosé being one of my favorites with its 60% Pinot Noir, masculine blend that’s balanced and lively with lovely red berry flavors. The Bollinger Special Cuvée ($79), another gem, was poured out of magnum with two fish courses, Arctic char and Wahoo crudo. The journalists all remarked how well the Special Cuvée paired with fish both raw and cooked.The main course, roasted guinea hen, was presented with the vintages–La Grande Année 2005 ($155) and La Grande Année Rosé– poured in glasses side by side. When surveyed, most guests raised their hands to choose La Grande Année Rosé as the better pairing for the guinea hen. These pairing decisions are analyzed with upmost seriousness. Finally, the cheese course—a Grayson Espuma with walnut, grape and apple sorbet—was matched with Bollinger R.D. 2002 ($350), i.e. recently disgorged, which had been kept on lees for 14 years. These R.D. Champagnes are the ultimate for Champagne collectors, which I found out at an auction soon after the dinner. 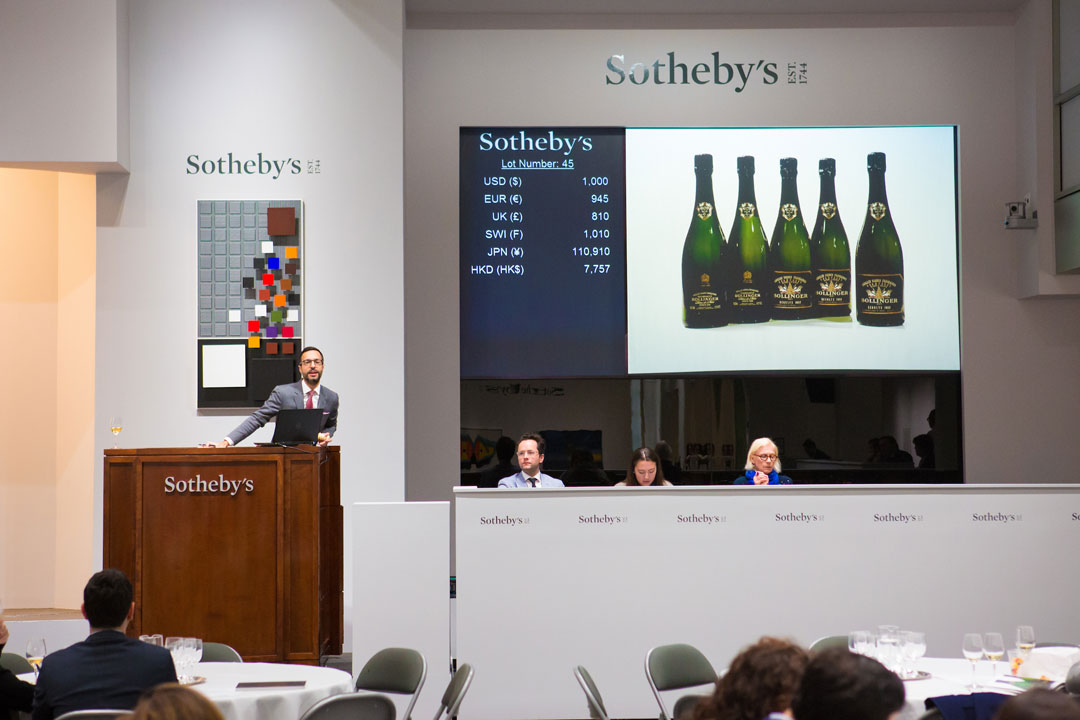 In mid-November I attended “A Century of Champagne Bollinger: Direct from the Cellars” at Sotheby’s auction house and watched record prices for various lots like Bollinger R.D. Année Rare 1973 (3 magnums) which brought $4200. Two jeroboams of R.D.1979 sold for $5,500 each.  A one-of-a-kind collection of every size bottle made of the Special Cuvée ranging from the half bottle all the way up to a 15-liter Nebuchadnezzar was bid at $7,500. Exciting to see how these wine auctions work with people on the phone receiving bids from collectors all over the world.

The auction was followed by a Champagne reception at the much buzzed about Agern, the new Michelin star restaurant opened by Noma’s co-founded, Claus Meyer, within Grand Central Station. Again the Bollinger Rosé and the Bollinger Special Cuvée Brut NV were poured out of magnum and the most delectable little hors d’oeuvres, many on Agern’s signature rye breads, were passed around. 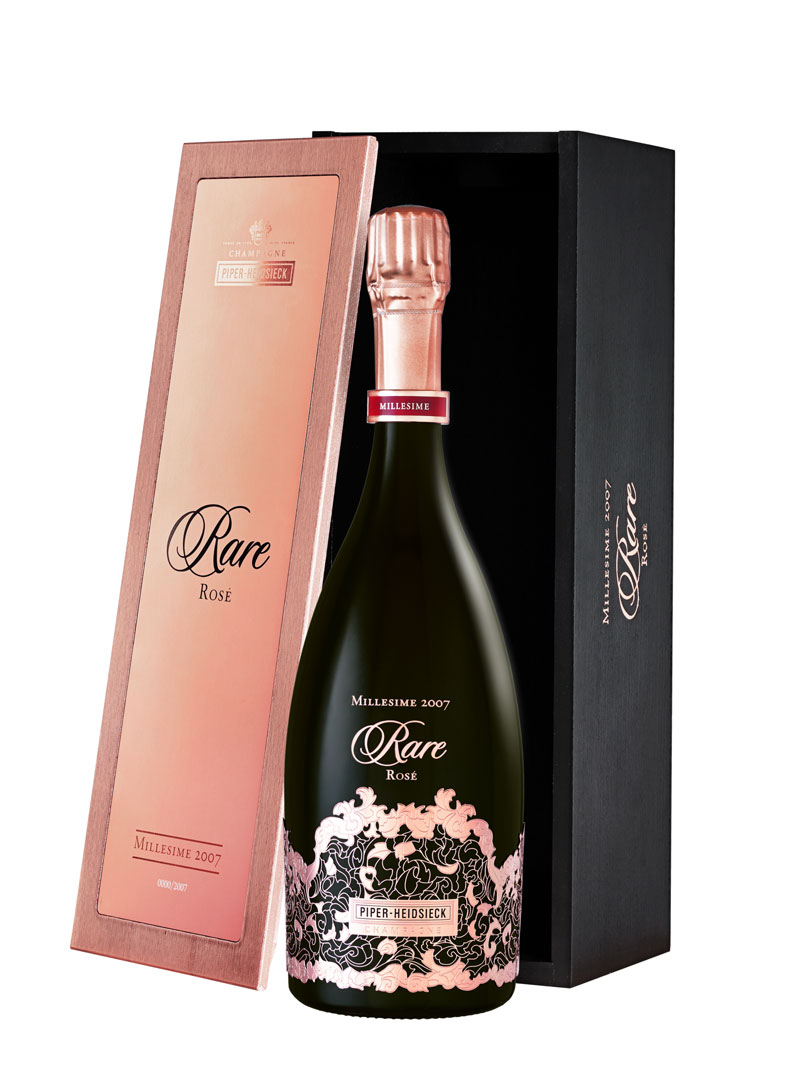 One of the first splurge-worthy Champagnes I tasted in early fall was Piper Heidsieck Rare Rosé Millesimé 2007 ($450), a gorgeous, golden-pink hued cuvée with fragrances of lychee and wild strawberry giving way to flavors of pomegranate, passion fruit and exotic herbs. This exciting rosé, aged for 8 years on its lees, comes in an exquisite bottle with a golden-laced tiara (created by a Parisian jeweler) encircling it. I dined with the with the venerable Chef de Cave Regis Camus at Tamarind in Tribeca. He explained how they release the Rare only in optimal years. We sipped this jewel-like Champagne and paired it with fine Indian cuisine. 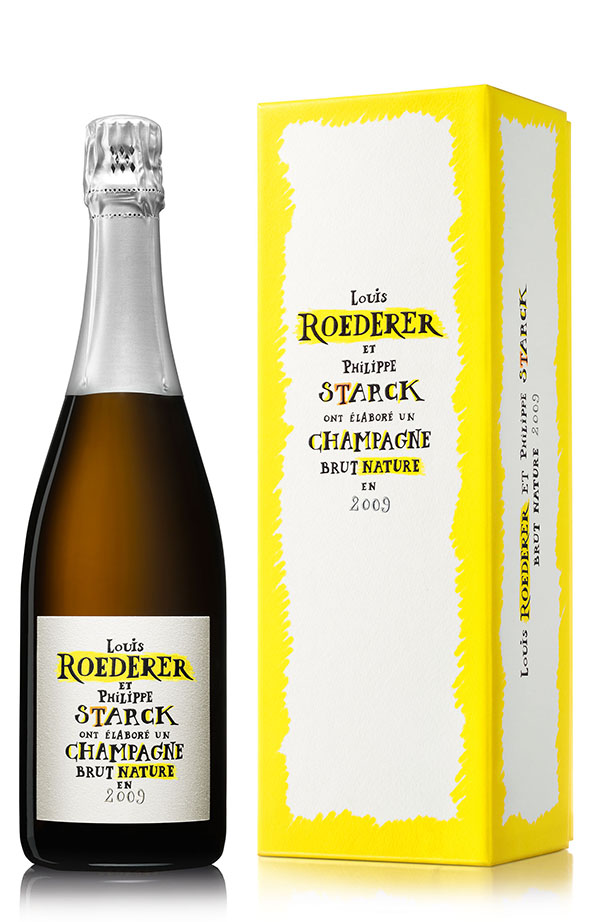 Last year Louis Roederer hired artist and designer, Philippe Starck, to create a collectible designed box and label design for their Brut Nature 2006, made from biodynamic grapes with a zero dosage, meaning no added sugar. It was the purest expression of the exceptional terroir. He created a simple, bright white box with a seemingly handwritten scrawl on the label. I found this design a bit understated for the impressive house of Roederer, the makers of the legendary Cristal.

This fall they launched the second vintage of Louis Roederer Brut Nature 2009 ($89), once again in collaboration with artist, Philippe Starck. This time Starck outdid himself with the celebratory holiday box and label design choosing playful colors of bright white and sunny yellow and a pop of pink on a letter. Brut Nature is enchanting with aromas of honeysuckle, peach and hazelnut. It’s citrusy on the palette and has a lovely creamy mousse. Philippe Starck compares this to “the Second Volume of a literary work penned by Louis Roederer.” 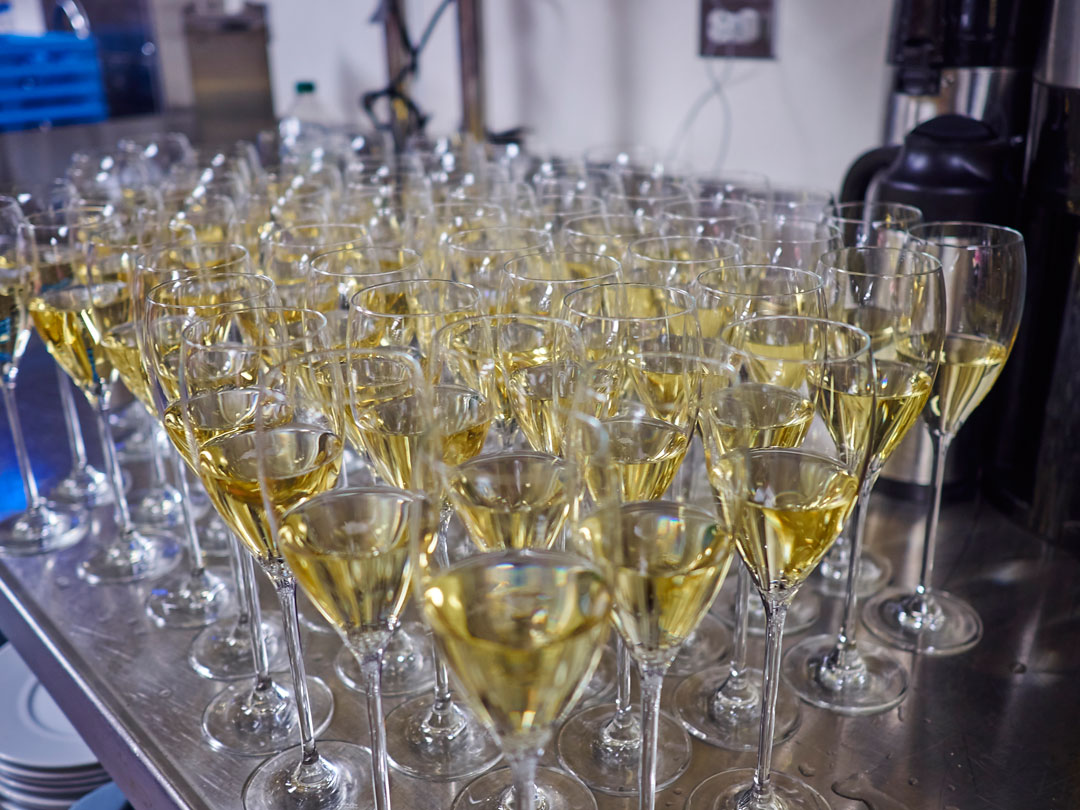 Barons de Rothschild Rosé ($125) was again served at a James Beard Foundation fundraiser, this time its 30th Fall Gala held at the Rainbow Room.  It was one of those charmed evenings when one feels on the top of the world walking along the 65th floor’s stretch of picture windows showcasing Manhattan’s skyscrapers. Indeed, I felt the glow of living the high life sipping rosé bubbly while being serenaded by jazzy Joelle and the Pinehurst Trio and feasting on petit lobster rolls and spicy-sauced chicken satay.

The evening was themed “Singapore Culinary Crossroads.”The foundation teamed up with the Singapore Tourism Board to feature top chefs from America and Singapore, who presented a multi-course, sit-down dinner with a wealth of delicacies from compressed duck foie gras and miso blue lobster to braised beef short ribs with coconut jasmine rice.

At the start of the reception, the award winning NY bar, Employees Only, which has recently opened a branch in Singapore, created the cocktails. The Rothschild Rosé was served at the cocktail hour when guests could bid on the silent auction items and then the Barons de Rothschild Brut ($100) took over for the rest of the evening when during dinner the live auction featuring many travel and culinary packages went on. One premium package offered was a six night “Food Lovers Ultimate Trip to Singapore.” I’ve traveled to Singapore once for a food story, so I can imagine the bliss this “ultimate food lovers” trip will be. This and many other auction items raised a quarter of a million dollars for the foundation’s educational programs. 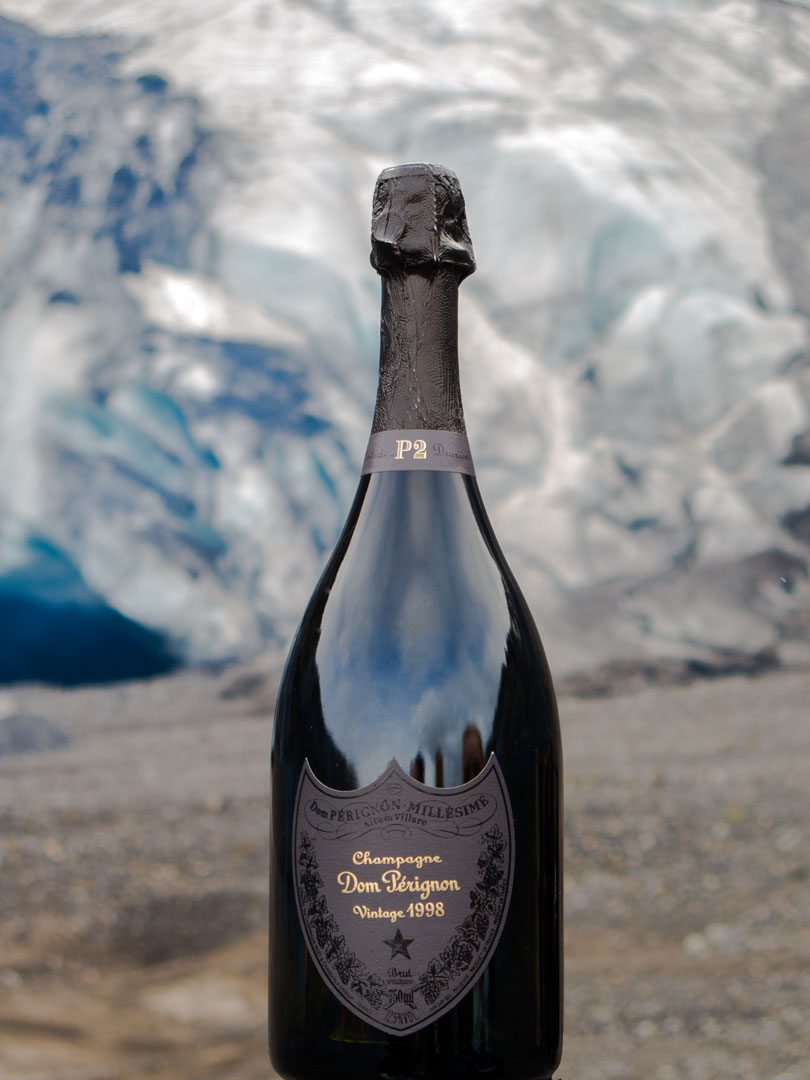 I remember well the fabulous soirée that Dom Pérignon threw last year to launch its Rosé vintage 2004 in New York. The brand took over an entire building on the Lower East Side and re-decorated it as the Dom Pérignon kingdom. The evening—which featured a cabaret show with actors from The Box and Sleep No More and which culminated in spray of confetti over the crowd—could only be described as Fellini-esque.

This year’s official launch for the Dom Pérignon Rosé 2005 ($265) took place at Art Basel. So, the New York launch was a low-key affair with winemaker Vincent Chaperon giving journalists a one-on-one first taste.  The new vintage Rosé 2005 didn’t disappoint, showing all the “mystery, sensuality and profundity,” those familiar descriptors, for which Dom’s cuvées are known.  With intriguing aromas of guava, cocoa, blood orange and even a heralded note of curry leaf, the wine displayed characteristic richness, power and structure.

A month after the Rosé 2005 tasting, I was invited to a private Champagne dinner at Omar’s la Ranita on West 9th Street where I tasted Dom Pérignon P2 Vintage 1998 ($349), a cuvee aged 16 years. It was the most beguiling and intense wine with a distinct smoky note on the finish, tasting somewhat like an aged white Burgundy. Dom Pérignon releases older vintages under a new concept called “Plenitudes” at levels P1, P2, and P3. At the P2 level with over 15 years of age, the wine is said to be at its “peak of energy, intensity, high definition and precision.” Chef de Cave Richard Geoffroy once explained this all to me, saying that Champagne is about tension, structure and how you perceive its energy in the mouth. These aged “Plenitude” wines can be ordered at gifts.mhusa.com. 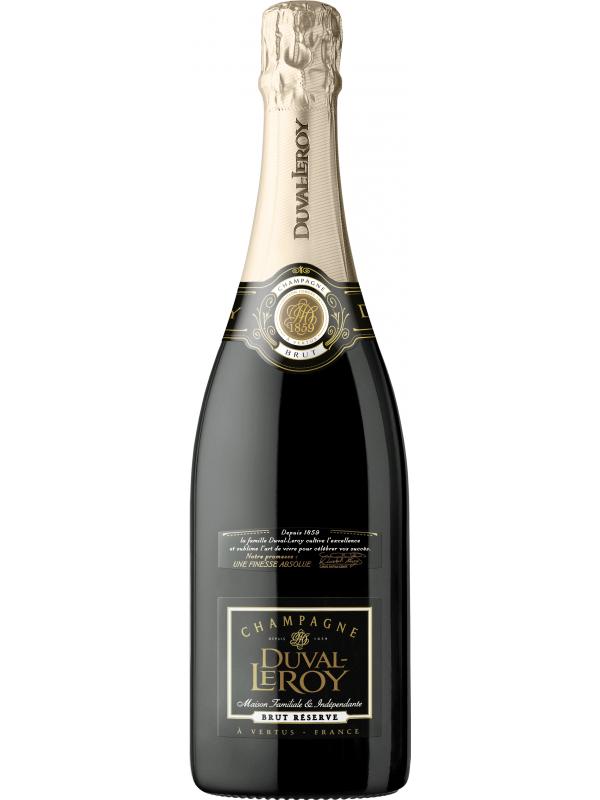 I discovered a perfect NV Champagne, Duval-Leroy Brut Reserve ($50), at the French Consulate where the U.S. Pâté-Croûte Finale was held.

Culinary and wine world luminaries– Daniel Boulud, Gabriel Kreuther, Jacques Pepin, Ariane Daguin​ and Michel Chapoutier—gathered to judge the beautifully designed blocks of pork, bison or duck pâté which were wrapped in fine pastry.Each pâté was made by a leading US or North American chef (Montreal chef, Eric Gauthier of Ateliers & Saveurs, competed). The judges inspected each large fanciful cake before it was cut into 100’s of small taster bites for all to enjoy.

The crowd washed down the pâté with Duval-Leroy Brut Reserve NV Champagne. This was my first exposure to elegant and refined Duval-Leroy, a brand that goes back to 1859. With its winemaker Sandrine Logette-Jardin and owner Carol Duval-Leroy, it’s a female operation in Vertus in the Cotes de Blancs. 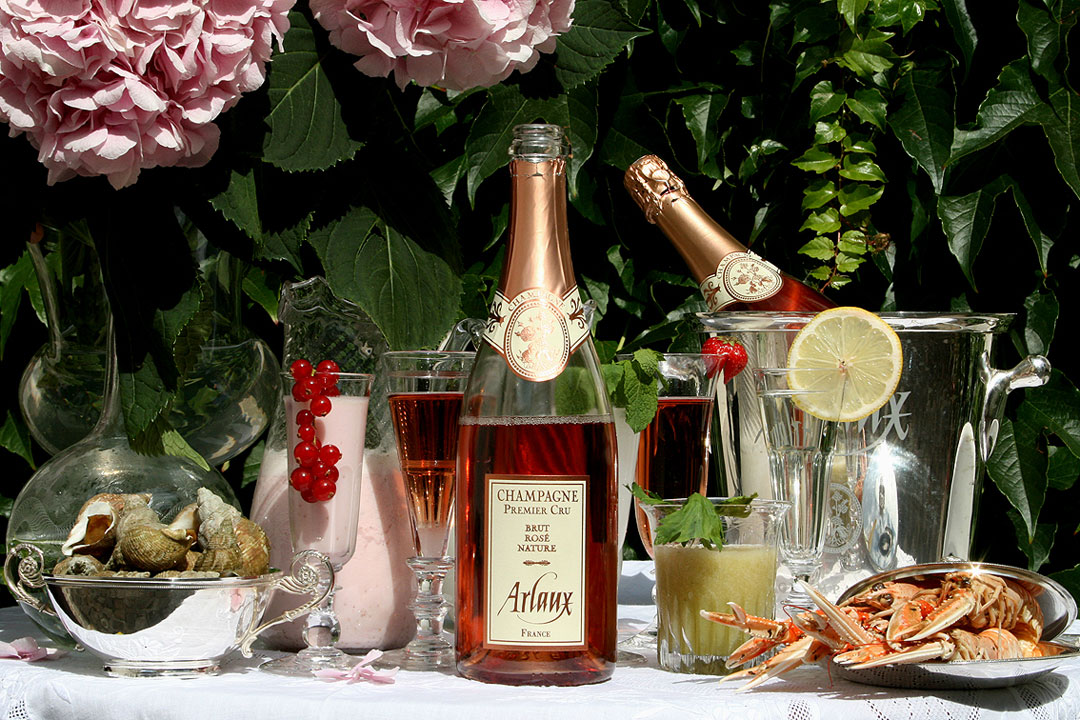 It’s always exciting to be exposed to a new Champagne. This November I attended a seminar at Bar Boulud for the House of Arlaux. Located in the Montagne de Reims, Arlaux is a tiny family-owned brand with its vineyards all classified as Premier Cru. The property has been in the Arlaux family for centuries and they started producing Champagne in 1826. There are many distinctive elements to their story: they have some of the oldest pre-phylloxera vines; all their viticulture is done without pesticides since 1997; they hand-harvest the grapes; and most uniquely, they used a predominance of Pinot Meunier in their blends. Their vineyards are historic going back 1,000 years owned by the Royal Abbey of Saint-Remi whose monks recorded winery activities from the year 1106.

Christine Arlaux-Marechal and her brother Philippe, the 15th generations in the Arlaux family, own and run the winery. Arlaux is considered a private label producing between 80-100,000 bottles a year, all of it is de Cuvée.

I was delighted to be in the room with wine reviewing royalty, the Wine Spectator and Wine Enthusiast folks and Florence Fabricant of the Times. We first sipped the Arlaux Brut Grande Cuvee NV ($48), which has 60% Pinot Meunier in its blend with 30% Pinot Noir and 10% Chardonnay. It showed great elegance and a lovely fruity flavor. Next we tasted the Brut Rosé NV ($54) which had the same grape percentages and again was delightful, fresh and lively. Pinot Meunier is usually considered a more rustic grape which generally is used in trace amounts to bring roundness to Champagne blends. So, this 60% was really an exception. The NV is aged three years—also rare for non-vintage bubbly. I deduced that the long aging and the Pinot Meunier from very old vines made Arlaux extremely refined with a mature, rounded fruity flavor.

We moved on to two vintages—Millésime Rare 2000 ($95) and Millésime Rare 1998 ($95). Both had a blend with a 1/3 of each Champagne grape and were remarkable low priced for a vintage. This precious brand has just become available in New York, though has been at top restaurants like Restaurant Daniel for two years. And curiously its biggest market is the Japanese who especially appreciate the fruity flavor from the Pinot Meunier.