Inside the Eclectic Townhouse of Artist Richard Gillette 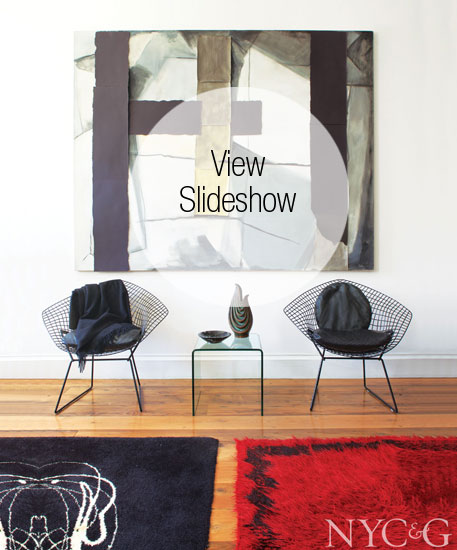 When he was growing up in Rome (the one in central New York, not the one in Italy), Richard Gillette found himself drawn to the variety of homes he saw in his historic small city, from pre-Revolutionary farmhouses to stately Victorians and mid-20th-century ranches. At the school next door to the home he shared with four older brothers and Sicilian parents, a replica of the Elgin Marbles sparked his interest in things Greek and Roman. He also savored the modernist simplicity of the Munson-Williams-Proctor Arts Institute in nearby Utica, with its 1960 International-style Philip Johnson building. “It’s where I saw my first Jackson Pollock,” remembers Gillette, with all the enthusiasm of the impressionable ten-year-old he was at the time.

At 17, he moved to Manhattan to attend the School of Visual Arts, eventually settling in a subsidized artist’s studio in Tribeca. “Nobody wanted to live down there in those days,” he says. “It was a wasteland.” He stayed in the building for more than three decades, while his neighborhood became the epicenter of upscale cool, and artists were evicted one by one.

Meanwhile, he embarked on a design career, eschewing the typical “signature look” that was de rigueur for decorators of the day in favor of an entirely idiosyncratic mix. “The word ‘eclectic’ is overused now,” he acknowledges, “but it’s something I’ve been screaming for 40 years. I enjoy every style, from rococo to the Bauhaus, and I think somehow it can all work together.”

Despite the gentrification, and later 9/11, Gillette remained loyal to downtown Manhattan. Ahead of the curve, he moved to the Financial District. “The light was great, and the views were spectacular,” he says. “I thought I’d just do it for a few years, but I ended up in two different apartments in the same building for well over a decade.”

Then Hurricane Sandy flooded him out. “My building was hit really hard, and I was homeless for two months,” says Gillette, who trekked 125 miles north to Hudson, New York, to stay with his elder brother, Rick (né Francis Ricardo), a renowned hair and makeup artist. Gillette was cautiously smitten with Hudson’s rich architectural history and abundant antiques and home design shops, so he packed up and moved there, into a brand-new Colonial-inspired townhouse. “I’m renting with an option to buy,” he explains, “which is why it’s designed as a showcase for my art, with an emphasis on what you can do without tearing down walls.”

The 1,500-square-foot, two-bedroom home is filled with an unsurprisingly “eclectic” assortment of art and furnishings, from plaster casts of Roman statuary and vintage replicas of Louis XIV and Empire furniture to wire-mesh Bertoia chairs adorned, in Gillette’s contra-purist mode, with Frette cashmere throws. His paintings are everywhere, and like most creative people, he’s a bit irreverent. He added graphic punch to his kitchen’s white cabinets by outlining them with masking tape, then finished the look with vintage marble pulls. In his bedroom, he created a pair of small desks from 1940s bedside tables and mid-20th-century boomerang-shaped tops of rare Italian black and gold marble. (“I had the night tables on either side of the bed, but I thought it was just too predictable,” he says.) His headboard is a panel from an old Plexiglas room divider, turned on its side.

As for whether he’ll take the plunge and buy the home or move on, Gillette is still unsure. “I love this house, but winters are cold in the Northeast, so there might be someplace warm in my future. Still, given my past history, I tend to stay in places a lot longer than I ever think I will.”

A version of this article appeared in the March 2016 issue of NYC&G (New York Cottages & Gardens) with the headline: Hudson School.