Inside the Historic Pacific Heights Residence of Jack Calhoun 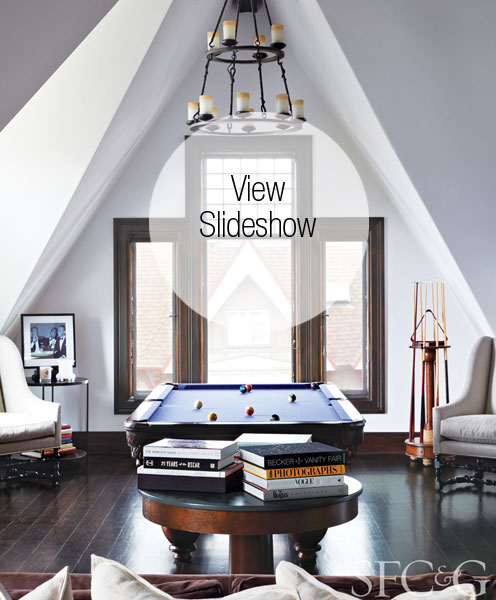 A gabled mansion in Pacific Heights, where Jack Calhoun lives with his husband, attorney Trent Norris, was built in 1905 for the city’s mayor. “Apparently, he slept soundly right through the earthquake, so it’s safe to say that we own a solid building,” says Calhoun. He should know, considering he served as interior designer, engineer and architect when the couple decided to renovate.

A true polymath, Calhoun holds two degrees—in technology and business from Purdue and Harvard respectively—is a trained opera singer, and enjoyed a 12-year tenure as global president of Banana Republic. “All the things I’ve done enrich the present moment. They inform everything I do,” says Calhoun, who now serves on the boards of the Fine Arts Museums and San Francisco Opera.

Before the renovation, Calhoun likened the four-story house to a cavernous rectory. But now, after ambitious changes—the addition of a gourmet kitchen, a paneled library, catering facilities and a wine cellar—it’s more like a series of intimate moments. Needless to say, there are also a few wows: In the living room, for example, Calhoun installed French doors that open onto balconies above a manicured garden and, on the top floor, transformed three cramped rooms into a lofty family room with soaring, 20-foot-high ceilings. He discovered the latter was possible when he climbed into the attic and saw that the lathe and plaster walls and lowered ceiling had no structural purpose. While adhering to historic code levels, he raised the interior to the roofline around the entire floor, thereby doubling the window and gable sizes. “I think a lot about how we perceive space, but I always come back to basics, to usability and human scale,” he says.

Over the course of his career, Calhoun has worked with celebrated photographers like Herb Ritts and Patrick Demarchelier, and draws wisdom from their work. “Their best images never involve hard poses,” explains Calhoun. “They capture a moment before or after something occurs. Whenever I put a room together, I always accommodate spontaneity.” Calhoun also edits decisively and only buys new art, furniture or accessories if he has an open spot. And then there’s the importance of details. “Look how a certain button or stitching can make a generic shirt memorable!” he says. “Everything in the design world warrants that type of scrutiny.”

Calhoun’s art collection reflects his astute eye for detail, color, and pattern, and includes many autobiographical moments. In the sitting room, two works by Kari Taylor—Fashion Statement II and V—feature melting renditions of Prada and Louis Vuitton logos, nods to Calhoun’s fashion past. Befitting a sartorially minded collector, patterning is also prevalent: Dreamscape, a work in oil and resin on wood by San Francisco artist Lola, is a vibrant take on camouflage; Epicenter by Mauro Oliveira is a bold geometrical study in resin; and a pair of works by Richard Roth are boldly striped in white and yellow. An aerial map of Paris in 20 framed sections is also a reminder of Calhoun’s many trips to the City of Light on behalf of Banana Republic to attend Fashion Week and open stores for the label.

“I want to create backdrops for a life well lived,” he says. “I’m flattered when a guest tells me how beautiful it is here, but I prefer it when someone tells me they feel relaxed and comfortable or at home. When we have parties, I want people to feel free enough to dance on the tables!”

A version of this article appeared in the October 2016 issue of SFC&G (San Francisco Cottages & Gardens) with the headline: Fashion Haven.