Inside the Minimalist Healdsburg Home of Designer Collin Burry 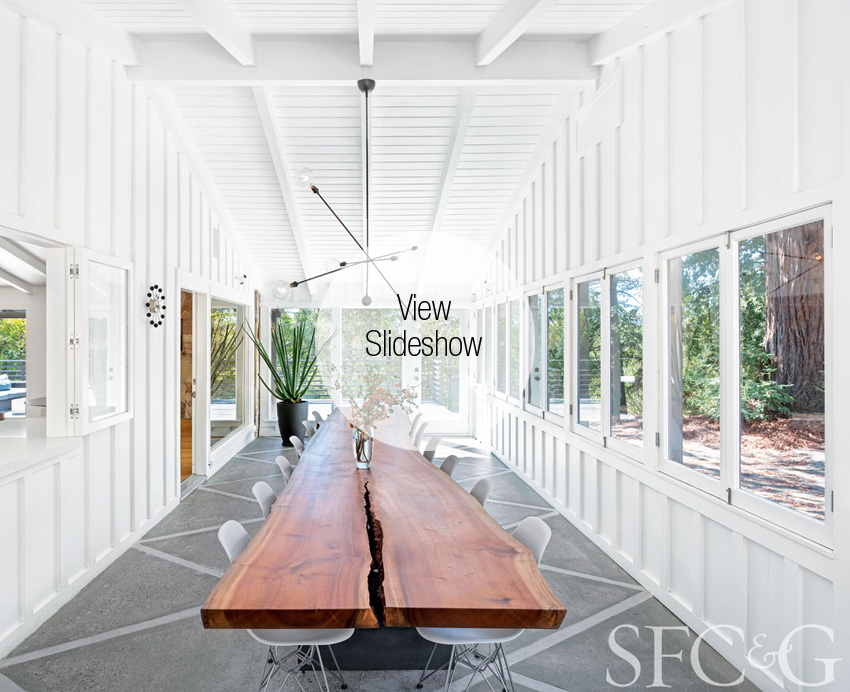 Collin Burry's sense of space and form was always acute. As a child, his favorite playthings were the wooden blocks his grandfather carved for him, and by the age of 10, his stack of hand-drawn house plans filled a manila folder. As a design director at Gensler, his portfolio has grown considerably larger. It features two decades of award-winning, innovative studios and showrooms for iconic clients including Apple, Samsung, Gallo, Dolby, Facebook, Pixar and Nokia. All of Burry’s work reflects how design can influence behavior, and his minimalist weekend retreat is no exception. “Just walking in here relaxes me and clears my head,” he says, “and when I breathe easily, my thinking gets more expansive.”

The site of the two 1950s ranch-style buildings—three acres of evergreen-filled woods—feels rural but is actually within walking distance of Healdsburg’s lively town square. When Burry and his longtime friend and co-investor, NicholsBooth Architects’ President Gary Nichols, first saw the main house, its clapboard exterior was hidden beneath a mass of brambles and ivy, but they could still spot its potential. “Inside the layout was a product of California modernism, but its aesthetic hadn’t actually taken root,” says Burry. “We just helped it along by opening everything up.”

Several key elements contribute to the interior’s loft-like spaciousness. Recessed lights emphasize the ceiling’s 14-foot pitch. With no carpets and few doors, the uninterrupted white oak floors seem to extend endlessly. And then there’s the monochrome color palette that turns the ceilings and walls into one continuous, enveloping surface that Burry likens to an egg. “It’s absolutely the whitest white. It’s almost devoid of pigment,” he says of the hue, Benjamin Moore’s Ultra White. “At first, it was startling and we freaked out, but now it just feels fresh, as if everything’s daylit.”

In addition to attracting and reflecting light, the white also serves as a background for a spirited collection of contemporary art. In the living room, a seven-by-seven-foot piece Burry commissioned from painter Andrew Schoultz provides an energetic explosion of color; a towering wood carving by Daniel Krivens greets guests in the main hall; and a series of striking portraits by artist Osvaldo Ferrer Miranda lines the main wall in the cottage. An original Eames wood splint, a gift Burry received when he was inducted into the Interior Design Hall of Fame, is also a nod to design as art.

The two buildings are otherwise accessory-free environments where the amount of furniture seems to take its cue from Einstein’s phrase, “Make things as simple as possible but no simpler.” In the well-edited living room, Knoll side tables edge up to a supremely comfortable, deep-seated Piero Lissoni sofa. In the kitchen, pristine Caesarstone counters are left uncluttered, and the appliances are integrated into or hidden inside a series of monolithic, fumed-oak cabinets. All the bathrooms are similarly spartan so that their fixtures read as tactile, sensual objects. Throughout, Burry’s choices have sculptural impact, whether it’s a shapely swivel chair designed by Matteo Grassi or a George Nelson chest of drawers in a bedroom.

Burry and his partner, real estate broker Milko Encinas—accompanied by their rescue dog, Frieda—and Nichols frequently entertain family and friends in the sun room around a 14-foot-long dining table that faces Sonoma Valley. Arborist Evan Shively crafted it from a two-inch-thick section of a bay laurel trunk, and Burry paired it with Eames wire-based chairs. When the doors and windows are thrown open, the space transforms into an inviting porch, seamlessly connected with the surrounding landscape. Thanks to Burry and Nichols’ clarity of vision, what was once muddled by overgrowth and neglect is now a space come into full bloom.

A version of this article appeared in the November/December 2016 issue of SFC&G (San Francisco Cottages & Gardens) with the headline: A Clean Getaway.