Inside the Sag Harbor Home of a Pair of Antique Dealers 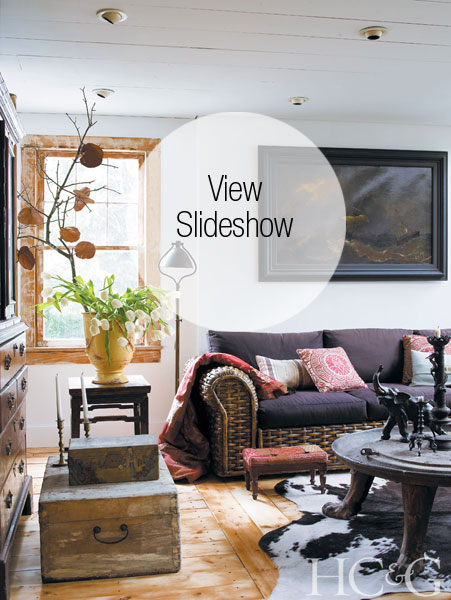 “He just can’t stop collecting,” Elfi Eicke says of her husband, who claims he knows within 10 seconds if he’s going to buy something. So it’s a good thing that Michael and Elfi Eicke have a shop to house the objects of their desires. Married for 31 years, the art and antiques dealers have collected so many pieces that at one point they simultaneously owned seven galleries in Europe and New York.

Having downsized considerably, the Eickes now purvey only out of their Sag Harbor shop, Christy’s Art Center. It makes sense that their nearby home is filled with some of their all-time favorite things.

Christy’s is a world-class gallery the likes of which you’d find in London or on Madison Avenue. Brick arches frame the museum-worthy multitude of artifacts—from late-18th-century panels rescued from a palace in Madrid after Franco’s death in 1975 to a pair of 17th-century marble urns. There are newer items, too, like a mid-20th-century coffee table and a huge canvas panel of Place Vendôme painted by Bernard Lamotte in 1946. “People are surprised when they come here,” says Michael, alluding to the breadth and scope of the couple’s inventory. “They don’t expect it.”

Elfi and Michael lived and worked in their native Germany and in London for most of the 1970s, ’80s and ’90s and also put down roots in Manhattan in the 1980s, so that they could be in the center of the “biggest art market in the world,” says Michael. But they didn’t want to raise their two young children in the city, so they decamped to the East End in 1994. “We fell in love with Sag Harbor,” says Elfi. “It reminds us of the North Sea—the same smells and seasons.”

The Eickes’ home is the showplace for their private collection. Located in a secluded corner of the village, the house started out as a modest fisherman’s saltbox dating from 1880. A century later, its former owner, artist Susan Rothenberg, added a two-story studio, connecting it to the main structure with a quirky walkway. “We weren’t sure we wanted the house until we saw how the moon was framed by the master bedroom’s windows,” says Elfi. One of the main attractions was the patchwork of small-scale rooms. “Nothing is big,” she continues. “It’s not like in a mansion, where you feel lost. There’s a feeling of connection.” The Eickes delight in spreading the rumor that a boxwood in their yard began life as a seedling party favor from George and Martha Washington’s wedding.

“We collect everything, all periods,” says Michael. But, cautions Elfi, “we don’t want to create a museum. This is Sag Harbor; you don’t go out in an evening gown here. And our kids live in the house too, and they have a different aesthetic.”

Different, perhaps, but a passion for fine furnishings definitely runs in the family. The Eickes’ son, Max, makes contemporary pieces that boast many of the same qualities of the beautifully crafted antiques his parents collect. In the dining room, his angular white Elfenbein chairs, named after his mother, add a note of levity to the heavy 19th-century brown trestle table. In the library, dominated by an ornately carved French 19th-century mahogany daybed, his whimsical lacquered “T” table blends seamlessly into the eclectic decor. “Something contemporary, as long as it’s high quality, works with something from 1710,” notes Michael.

In the master bedroom, a pile of steamer trunks and neatly stacked pigskin suitcases rests alongside family heirlooms. “My dad still travels with those suitcases,” says Max. Next to them sits a large-scale model of a steam locomotive, the sort that a world traveler would have boarded years ago with those same bags in hand.

Once an item comes home, it’s there to stay: The Eickes have never sold anything from the house. Besides family hand-me-downs, there are many pieces the pair bought together. “We’ve had such a colorful life,” says Michael. “We want to keep these reminders of the past as a history of our travels through the years.”

A version of this article appeared in the July 1 2011 issue of HC&G (Hamptons Cottages & Gardens) with the headline: Dealer’s Dream.

This article appears in the July-1 2011 issue of HC&G (Hamptons Cottages & Gardens).