Inside the Staggeringly Beautiful Italian Villa of Promemoria's Romeo Sozzi 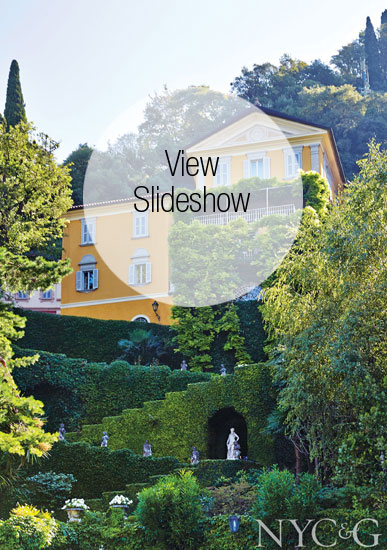 Not every man can get away with wearing a purple plaid Etro jacket, aubergine trousers, a crisp white dress shirt, and purple Italian-made Belgian loafers. Certainly not any American. And not even the Frenchiest fop or boulevardier. Despite the progress male peacocks have made during the past few decades, only an Italian can really pull off such a look. In this case, his name is Romeo Sozzi.

A third-generation cabinetmaker and founder of the high-end furniture company Promemoria, Sozzi descends from a family that once repaired and restored carriages for the aristocratic set on Lake Como. Now he himself lives in a staggeringly beautiful villa overlooking the lake in the picture-postcard town of Varenna, not far from Promemoria’s headquarters in Valmadrera. Built into a steep hillside, it also features dreamy terraced gardens that unfurl down the slope toward the lake, reached via what he calls a “lovers’ path” that meanders past stands of agapanthus, Japanese maples, palm trees, hydrangeas, vinca, callas, yews, forget-me-nots, and a carefully positioned meditation bench. “The bench keeps me calm,” he says, though he’s already the coolest cat on Como, thinking nothing of zooming back to his elegant apartment in Milan after a boisterous late-night dinner at a restaurant in nearby Fiumelatte. On a motorcycle.

“The lake has always been a source of inspiration,” he continues, taking in the view from the gardens. “It often leads to themes for our collections.” Not surprisingly, a good deal of pieces and prototypes from those collections are used in abundance inside his house, called Villa Mapelli, including a giant wardrobe with bronze handles, a rosewood desk, stitched-leather floor lamps, shagreen consoles, velvet sofas in a deep purple-brown, a red crocodile chair, and much more. A velvet-covered armoire with glass doors, a prototype, is named George for his neighbor George Clooney, who lives across the lake on the “fancier” Como branch, at Villa Oleandra in Laglio. And Promemoria’s Bilou Bilou chair, a best-seller named for an idiomatic expression that’s “like calling a cat or a dog,” makes its presence known in nearly every room.

Sozzi, who launched Promemoria in 1987, bought the house in 2001 and renovated it for about five years, finally taking residence in 2007. “I didn’t pull it apart or try to reinvent it; I just cleaned it up a bit,” he says, adding that he left doors and windows mostly intact and upgraded some of the flooring, in addition to opening up the kitchen, so “now you can see all the way through the house to the lake.” Aside from Sozzi’s velvet touches and exquisite refinements, what remains of the structure—portions of which date from as far back as 1650—are beautifully proportioned rooms and untold vintage details, from the glamorous fireplace to the ceiling soffits to old frescoes painted on the sitting room’s ceiling.

In the slightly more formal living room, an impressive piano, a Bosendorfer (Sozzi is a music lover and regularly plays), takes center stage. The space has a curious jag to it, as the house was made slightly smaller to accommodate the main road through Varenna, which was laid in the 19th century. (“The garden was much bigger then too, before the road,” Sozzi says.) Music fairly resonates from the villa’s walls, perhaps in part because members of the Venini family lived here from 1864 to the early 1900s. According to Sozzi, Contessa Venini was not good with money but really liked a good party, once organizing a concert that was performed from a platform on the lake for guests who had assembled on the villa’s hillside. “Contessa Venini knew a lot of musicians and writers,” he recounts. “Wagner, Liszt, and Verdi all performed here. It’s said that Wagner fell in love with a woman from Varenna and bought a house for her down the road in Fiumelatte” as a trysting place.

Curiously enough, for a home that’s so sumptuously appointed, Sozzi spends a lot of time in the humble, yet functional kitchen, where he likes to mix martinis (not Italian aperitivi, but American-style, with Gordon’s gin and a lemon twist). “The first time I went to New York,” he says with a laugh, “my dream was to have a cheeseburger and a martini.” Despite the plush velvet options in all the other rooms, visitors and family often congregate in the cheery, black and red space, where shelves are lined with Sicilian ceramics of prickly pears, made in the Catanian town of Caltagirone. “The kitchen is the center of the home, of conviviality,” muses Sozzi, an Italian to the core. “It’s the place to gather people all around the table. The kitchen is what makes people stay together.”

A version of this article appeared in the December/January 2016 issue of New York Cottages & Gardens with the headline: A Villa in Varenna.