Inside the Weston Home of a Mother and Son Design Team 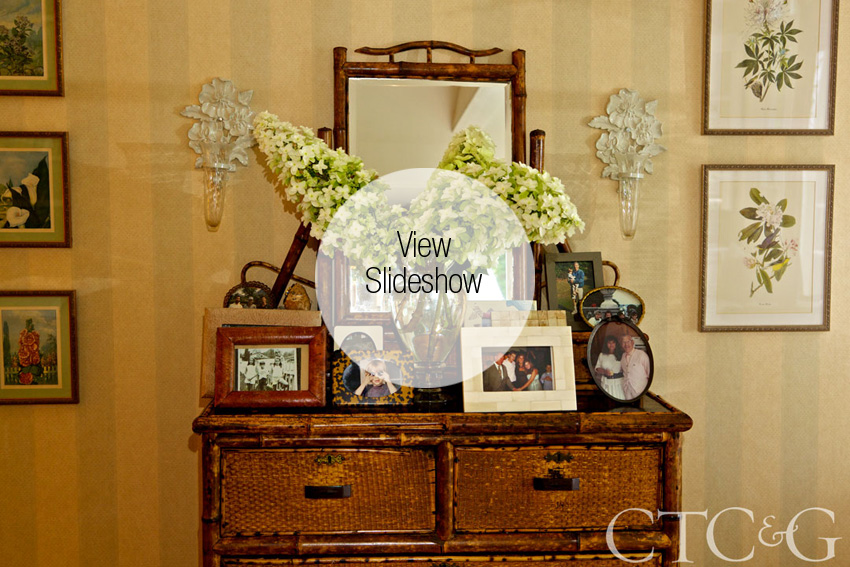 As a kid growing up in the cozy, antiques-filled home of his mother, interior designer Leslie Allen, Sam Allen often felt compelled to do a little “designing” of his own—removing a throw pillow here, color coordinating a stack of cookbooks there. “I’d invite people over for dinner, and I’d realize Sam had hidden something in the closet and I’d cringe,” Leslie recalls.

These days, living back at home and with a burgeoning design career of his own, 20-year-old Sam has a newfound respect for Leslie’s more traditional—yet eclectic—style. “The house is full of things that I wanted to change as a kid,” he says. “But now not not at all. You need a great balance of new and old to get that lived-in, homey look; it gives the room richness and layers.”

“It’s all about the mix,” Leslie agrees. “The textures and styles—a little cool, a little handsome, a little elegant; never really decorated but always in good taste.” For Leslie, whose aesthetic evokes interiors that have developed over time, that mix will likely include antique French or English bamboo and a neutral wall covering like the greige Farrow & Ball print in the guest bathroom. For Sam—whose look is fresh and modern with hints of Parisian glamour—that might include a piece of Lucite, a 19th-century French beaded crystal chandelier and an ikat print.

At home, Sam’s imprint is most clearly seen in his bedroom, which has evolved over the years from a vintage-filled nursery to a stylish retreat. He recently redid his walls with a bold Scalamandré print of sprinting zebras that works beautifully with the bamboo matchstick blinds and cowhide rug—left over from his “cowboy phase.” Leslie’s bedroom, by contrast, is a soothing sanctuary of blues and whites. The mirrored French bamboo armoire by the door to her balcony is one of a pair that she bought at auction in 1987.

Their tastes are more alike than they might seem, Leslie says. “Sam’s style is on the edge of mine, and mine is on the edge of his.” These days, she finds herself wanting things a little lighter and a lot more edited and distilled. She points to a glass-and-iron coffee table in the living room: “That was Sam’s influence.” As was a small ottoman behind the sofa, which sports a green velvet leopard-print. “I’ve never been one for animal prints,” she says. “Sam uses them a lot.”

As for Sam, there was a time when he didn’t care for Oriental rugs and now “I love them,” he says. Ditto for “extremely shiny high-gloss paint.”

Despite the challenges of living under the same roof—as designer/designer—never mind mother/son—both say the benefits far outweigh the potential pitfalls. Leslie recounts a recent experience with a client who wanted an Istanbul-Spice market palette for her home. “That’s not a palette I usually work with. I could go check out what was in Sam’s room and get some inspiration.”

For Sam, the feeling is mutual. “It’s great to be able to bounce ideas off each other, to have advice and words of wisdom at my fingertips.” There are times, both agree, that their patience can be tried. Like when Sam refills the cereals in the glass jars in the butler’s pantry before they are empty. “I always want things to look picture-perfect and styled,” he says. And then there was the battle of the Elizabeth Eakins cloth rug that used to be in the living room. “It’s so fragile,” Sam says, “and gets dirty so easily. I’d make people walk around it or I’d fold it up.”

“And I’d unfold it,” Leslie says. “We’d be folding and unfolding that rug 80 times a day.” Where is it now? “I moved it to the dining room,” she says.

When Sam decorated his home office, he chose a sea-grass rug for the coziness factor, painted the walls with Pratt & Lambert Gossamer Gray, which he declares “the perfect neutral,” and lined his shelves with orange Ikea file boxes. Meanwhile, Leslie’s home office above the detached garage is more open and airy, with windows on four sides. The proximity to each other is ideal. “My mom and I are constantly running back and forth, borrowing fabric samples and books,”says Sam. “It’s almost like our own little D&D building.”

A version of this article appeared in the October 2012 issue of CTC&G (Connecticut Cottages & Gardens) with the headline: She Said, He Said.