Inspired by Styles from Rustic Barn to Classic Colonial, These Homeowners Turned to a Team of Experts to Build a Home That Captures the Best of New England's Vernacular 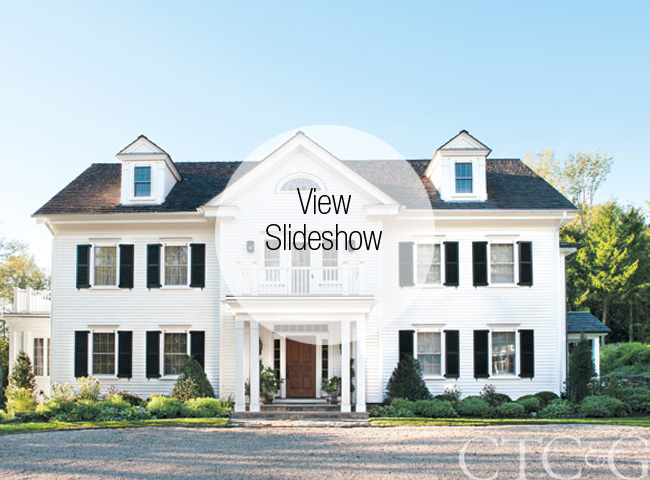 Cruising through the picturesque countryside of Washington is like taking a journey back in architectural time. The Georgian, Greek Revival and shingle-style homes often paired with 19th-century barns or mill structures that dot the landscape represent the best of New England’s classic vernacular. Not surprisingly, many people who move there feel an obligation to maintain the status quo, and a Manhattan couple looking to set down part-time roots was no exception.

After determining the circa-1950s ranch plagued by a poor foundation and water problems they purchased five years ago would be more costly to remodel than to tear down, they razed the building and set about enhancing their 4.4-acre property with a pair of structures more appropriate to the surroundings. “We were driven to create a home that felt like it had been on this property for generations,” says the husband. “We imagined it evolving with the families that lived here from an early farmhouse to the addition of the center-hall Colonial that would have been added by later generations.”

Architect Paul Hinkel, along with the father/son team from Ed Cady Sr. & Jr., Master Builders, set about realizing that vision. “The homeowner followed me around to different projects and became totally fascinated with barns,” says Ed Cady Sr., who specializes in barn relocation. In this case, a mid-1800s model from nearby Morris answered the early farmhouse requirement while providing the perfect framework for what would become the pool/guesthouse.

Meanwhile, Hinkel grappled with the challenges of designing an iconic structure on the hilly landscape. “We ended up siting it in roughly the same location as the existing house because it was the flattest spot,” says Hinkel. “But the other house was not very prominent architecturally, and this building, with its portico, dormers and steeper rooflines, is much more interesting.”

While the exterior exudes Colonial, the interior mix of formal crown moldings and wainscoting with stone and exposed beams was entirely intentional. Lining the kitchen ceiling in lime-washed antique exterior boards was influenced by the interior elements of the barn/pool house. “This seemed like a logical and beautiful way to tie the two spaces aesthetically,” says the wife.

An imagined history for the house might well have started in the kitchen, where the barn-wood floors were sanded and stained to look like they have known the footsteps of several generations. Going with that concept, interior designer Karen Davis of Davis Raines Design introduced a custom barn-wood island topped with chestnut, a stove hood comprised of antique wood and a stone backsplash opposite the fireplace. “I wanted to balance the stone on the two sides of the rooms,” says Davis, who then filled the adjoining spaces with comfy furnishings in keeping with the rustic motif.

In the family room, a creamy cowhide rug contrasts with the dark floor planks, and the armchair is topped with washable faux suede. “This is meant to be a place where you can put your feet up,” says the designer, noting the iron coffee table. “I had the alder dining room table made to fit the space and topped the banquette with a vinyl fabric.”

Located off the kitchen, the formal dining room is a transitional space where the cross beams intersect the crown moldings, and a chandelier reminiscent of a tree branch hangs above the Alder wood table sporting a light wash finish. In the living room, rolled armchairs, drapes fashioned from reproduction English fabrics, and an unexpected zebra rug move the home’s narrative into another era. “Like so many Connecticut houses, this one has the feel of having been added onto over time,” says Davis.

The rustic statement returns in the reassembled barn where the beauty of the original ceiling, windows and beams is undeniable. White plaster walls and iron light fixtures offset the architectural elements, and the Americana-inspired furnishings announce the informal intentions. “It’s meant to be a place where you can sit down in a wet bathing suit, and visiting friends and family can hang out and relax,” notes Davis.

A version of this article appeared in the January 2015 issue of Connecticut Cottages & Gardens with the headline:Historic Evolution.