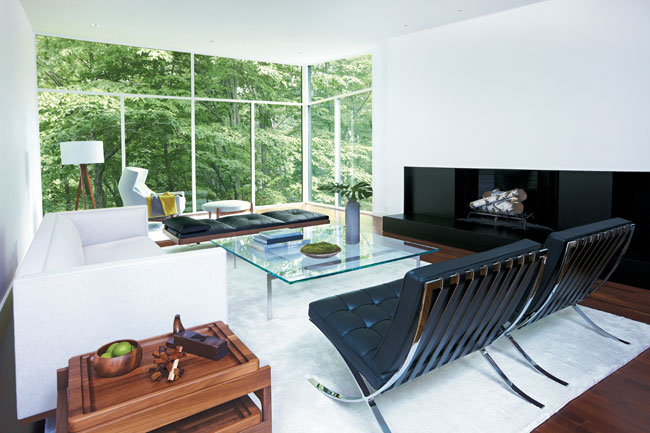 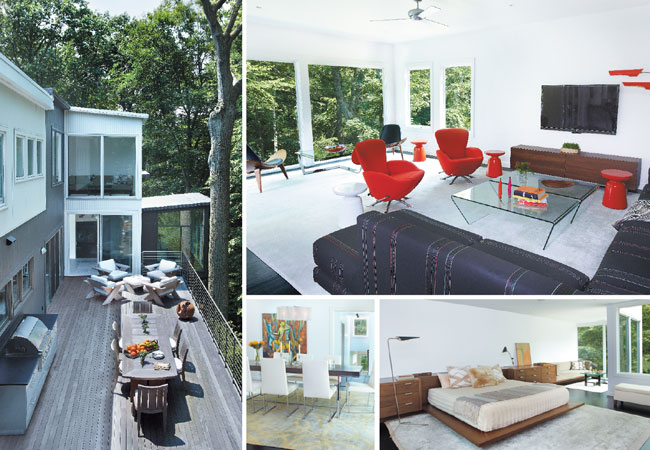 “You literally feel like you are in the trees,” says interior designer Leigh Stewart of Joeb Moore + Partners, Architects, LLC about the modern residence that serves as a quiet refuge for a couple in their late 40s. “My intent was to select furnishings and accessories that would allow the views to take center stage and let the colors from the outside fill the space.”about:blank

In the living room, that idea translated into a neutral palette of crisp white, stark black and mellow gray. “It’s where the homeowners entertain, so they wanted a more formal space,” says Stewart, who offset the cool tones and clean lines with warm walnut floors, plush hand-tufted viscose area rugs, and soft leather Barcelona chairs. “Instead of color, I used lush and supple textures to bring the space alive.”

To create a more playful atmosphere in the more casual family room, Stewart introduced vibrant orange chairs that swivel to face a sectional on one side of the large room and a pair of sleek Wegner shell chairs on the other. “The bold hue is meant to complement the colorful stripes on the sofa,” explains the designer. “A fine stripe as in a good men’s pinstripe suit.” Then Stewart included multifunctional round lacquer tables in the same hue that can be moved around the space with ease.

In keeping with the pared-down aesthetic, the master suite is outfitted with custom walnut veneer built-ins that span the entire length of the bedroom, transitioning from dresser to platform bed to sofa. “The spaces for storage, sleeping and relaxing are designed into a single element,” says Stewart.

To see more exclusive images not featured in this issue, click here 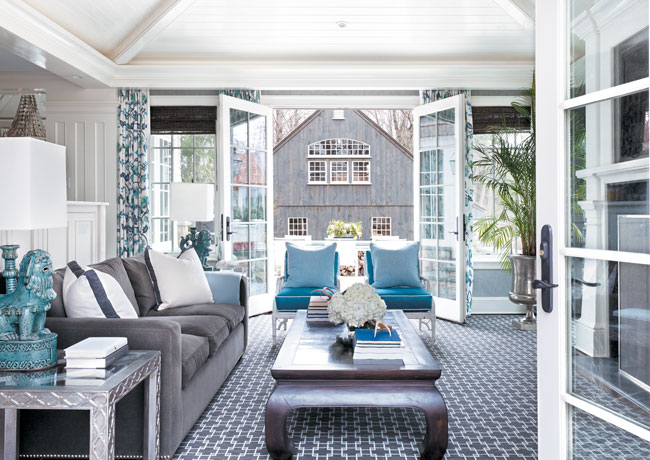 “The homeowner wanted it to be glamorous but not feminine, and playful enough for a family of four,” says interior designer Tiffany Eastman, who was charged with decorating the recently renovated Darien home. “The house belonged to her grandfather, and while maintaining its character was important, it was essential that the redesign reflect who they are and how they live.”

A Dresden blue adds a touch of whimsy in the predominantly gray family room, ice blue was added to the dove tones in the powder room, and the Venetian plaster dining room walls are a bold turquoise. “It works because the blue hue is carried through the house without being repetitive,” she says.

In the entry, classic millwork is juxtaposed with a tiger stair runner and a contemporary polished-nickel cage lantern that lights the grand staircase. “Magic happens when you infuse and mix different elements, and modern pieces prevent the space from looking dated,” she says.

Similarly, in the living room, a 19th-century French settee sports a bold 21st-century stripe, and a pair of upholstered chairs face off with the strong geometric floor covering. A vintage lamp and contemporary artwork complete
the mix. “Older pieces add character and personality,” says Eastman.

To see more exclusive images not featured in this issue, click here 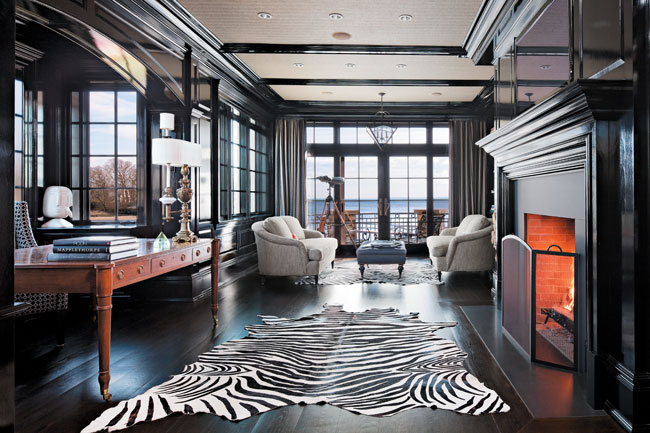 “With the amount of millwork in this room, it is essentially just one big piece of furniture,” says architect Robert Cardello about the library/office he situated to take advantage of the unobstructed maritime views of Long Island Sound. “It needed to be a fully functioning office with ample bookshelves and adequate storage for computers and printers.”

After orchestrating the layout of the space, Cardello specified a traditional finish for the raised clear pine panels. But interior designer Polly Denham, who collaborated on the project, had other ideas. “I was so tired of the usual cherry and mahogany, I decided we were doing black lacquer,” says Denham, who kept the theme going with ebony and coffee wide plank floors and an Absolute black granite fireplace surround.

Sisal-colored grasscloth panels in the ceiling prevent the high-gloss finish from becoming overwhelming, and Denham further tempered the black with matching loveseats topped with a nubby taupe and white chenille. Zebra striped rugs were a natural choice for floor coverings, and a black iron and glass Paul Revere fixture lights the seating area. “They named it after Revere because upside down it resembles his hat,” notes the designer.

For his part, Cardello added extra deep sills to the windows and divided light glass on the French doors that lead to a terrace. “Everything is in keeping with the look we wanted to create,” he says.