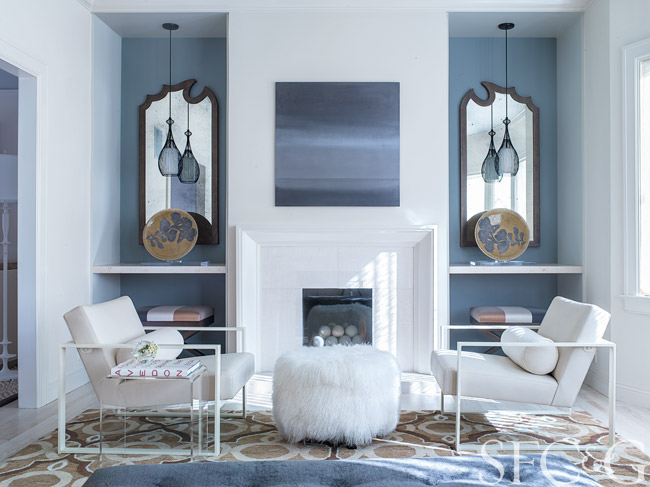 Interior designer Angela Free doesn’t mince words when describing the state of her client’s home when she first toured it. “Terrifying,” she says. The 1920s Marina abode belongs to an entrepreneur who had rented it out for years before taking up residence in it herself in 2012. During Free’s initial visit, she was greeted with wall-to-wall carpeting, dropped ceilings and “mirrored tile everywhere,” she recalls. “What you would think of as good architectural dimensions had all been removed or obscured.” Fortunately, Free and her client shared a vision for reviving the two-bedroom space.

Since Free also lives in the neighborhood, she’s no stranger to its architecture. Working with architect Thayer Hopkins and contractor Clayton Timbrell, Free focused on “an updated, more open floor plan and reinstatement of original architectural details,” she says. By removing and restructuring doorways (“There were areas with so many doors, they would crash into each other”), they succeeded in imparting a light and airy feel throughout. Carpeting was replaced with bleached oak planks, the dropped ceiling and mirrored tiles were banished, and molding was added. 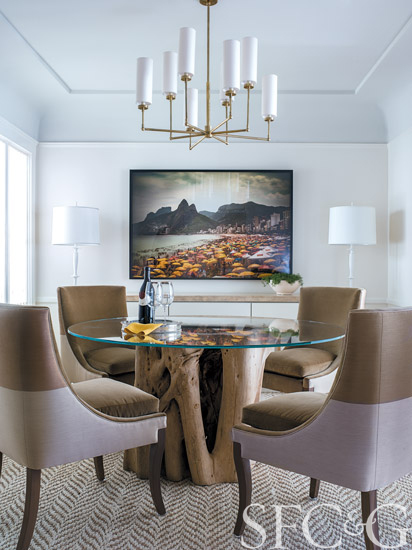 To achieve an interior that was classic and tailored yet modern (an Angela Free Design signature), the designer relied heavily on subtle colors and textures. Throughout the home, walls and ceilings were treated to soothing, contemporary paint colors; the blue-gray palette evokes the foggy neighborhood. “There’s a seamless flow between the indoors and outdoors,” notes Free.

In the 12-by-24-foot living room, Free created two zones with a vintage 1950s button-tufted bench. She anchored one space with a sofa and armchair upholstered in quietly refined ivory linen and ivory wool. A trio of side tables in varying materials—Lucite, geometric wood, and bronze and marble—adds both visual interest and functionality. On the opposite side of the room, limestone tiles and a simple mantel frame the hearth; a pigment-on-steel work by Miya Ando hangs above. Ample seating comes in the form of x-benches tucked beneath built-in shelves, a Mongolian lamb-fur ottoman and a pair of metal-and-leather chairs. The latter have an unexpected provenance: Free took frames from CB2 chairs, powder-coated them, and then rebuilt the chairs with new seats.

Nature-inspired elements are a thread throughout the home. In the dining room, the refinement of a lacquered credenza is offset by a table featuring a circle of glass atop a strangler-vine root base. In the kitchen, a Jeffrey Davis landscape photograph anchors an end wall, and the office features a pair of rustic fauxbois paintings. 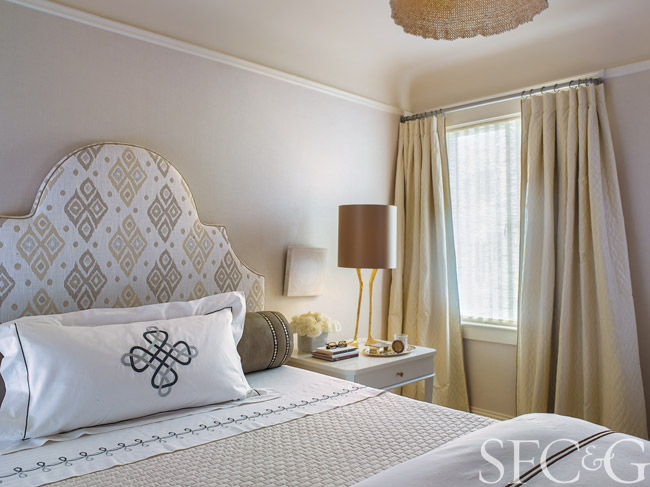 The master bedroom is a study in textures and showcases the importance of details. With walls wrapped in a Maharam linen, a chandelier crafted of woven coco beads, and a mirror framed in shagreen, Free truly has created a tactile, sensual space.

Indeed, the dwelling’s overhaul is as remarkable for its more subtler touches as it is for its major changes. In a narrow hallway, for example, no artwork graces the walls, so at first glance, it might seem an overlooked space. But a flick of the light switch reveals otherwise: Three latticed pendant lamps produce an entrancing shadow pattern on the walls and ceilings. Notes Free of the hall, which certainly applies to the home as a whole, “We tried to create a very special effect—to transform it from nondescript to magical.”

A version of this article appeared in the March 2014 issue of San Francisco Cottages & Gardens with the headline: Marine Layers.