"Think of a fabulous cruise ship, or a huge, magnificent hotel," interior designer Catherine Cleare urged her clients as she pitched the idea of turning their unfinished basement into an elegant man cave... 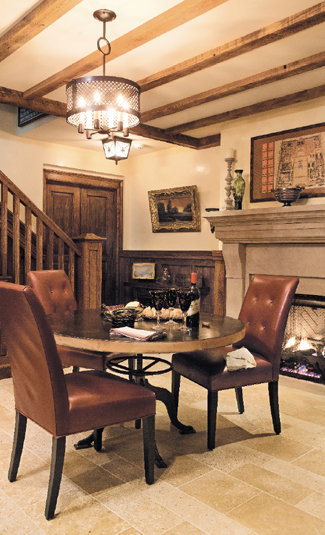 "Think of a fabulous cruise ship, or a huge, magnificent hotel,” interior designer Catherine Cleare urged her clients as she pitched the idea of turning their unfinished basement into an elegant man cave. “They have spectacular entertainment halls that are 100 percent interior, no windows.”

Cleare was decorating the home of a family of six with children ranging from age three to 16. The family-room television was dominated by Muppets and hip-hop, leaving no place for the father, an avid football fan, to catch Sunday’s game. “We needed to give this man his space,” Cleare says.

The man cave started as a place to entertain, requiring a bar and a billiard table. The homeowners are also wine collectors, so the idea of a wine-tasting area emerged. And most importantly, it needed TVs. “Now, wherever you are, you can be watching sports,” the designer explains.

Most importantly, Cleare was determined not to have the room feel like a secondary space. Wainscoting extends up the staircase to create a seamless transition from the first-floor interiors. Architectural elements, like ceiling beams (which are actually hollow), stained wide-plank white oak floors, bookcases and a gas fireplace were added so that “you never know that you are in a basement.” Instead, the space feels like a fine men’s library. “It’s very masculine, but not dark and oppressive,” says Cleare, who kept fabrics light. She wanted to create warmth, but keep the aesthetic casual. “It’s not an English parlor. I want guests to feel like they can put their feet up on the sofa.”

And of course, the bar is stocked with all of the essentials—a cooler with plenty of beer and soda, a dishwasher and even a kegerator. Everything came down to comfort and entertaining. According to Cleare, the result is a place where “everybody would know instinctively they could take their shoes off.”