Treasures from across the globe are used to make this house a home. 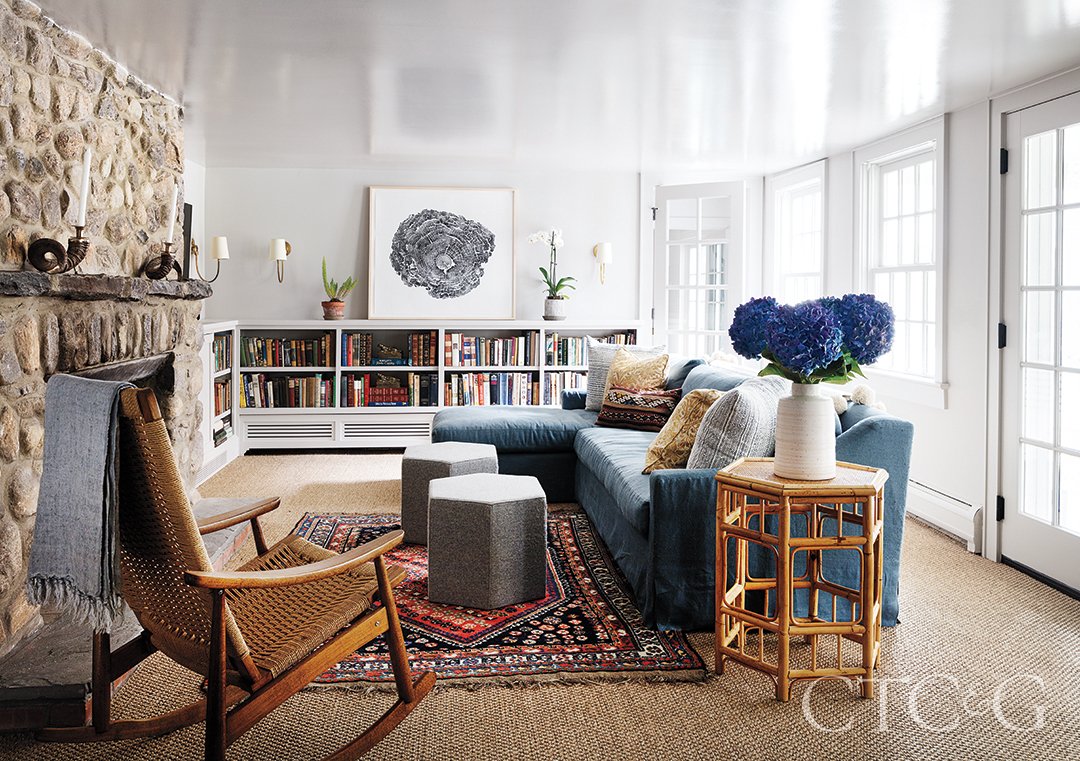 Thomas O’Brien sconces from Circa Lighting flank artwork by Bryan Nash Gill on one end of the family room, which is furnished with an RH sofa, a Hans Wegner rocking chair from 1stDibs and Blu Dot ottomans. Photography by Tim Lenz

Kat McConnaughey has a favorite wallpaper in her Weston home. She never tires of gazing at the pattern, even if it does change constantly. The pattern, which surrounds three sides of the 1928 house she shares with her husband, is not on the walls, but, rather outside of them. “when I look out the windows and see all the moments of nature around us, I think of it as being like wallpaper seen through glass,” she says, referring to the sinuous Saugatuck River that winds through their property, along with foliage interspersed with nesting bald eagles, herons, and beams of sunlight and moonlight.”

It was the home’s setting that was the primary focus for the interior design that New York– and Sharon–based interior designer Heide Hendricks was commissioned to undertake. “The couple are both huge nature lovers, gardeners and conservationists,” Hendricks explains, “and our mandate from the start was to not obscure the views in any way. In fact, we sought ways to bring in more of the surrounding nature and sunlight.” 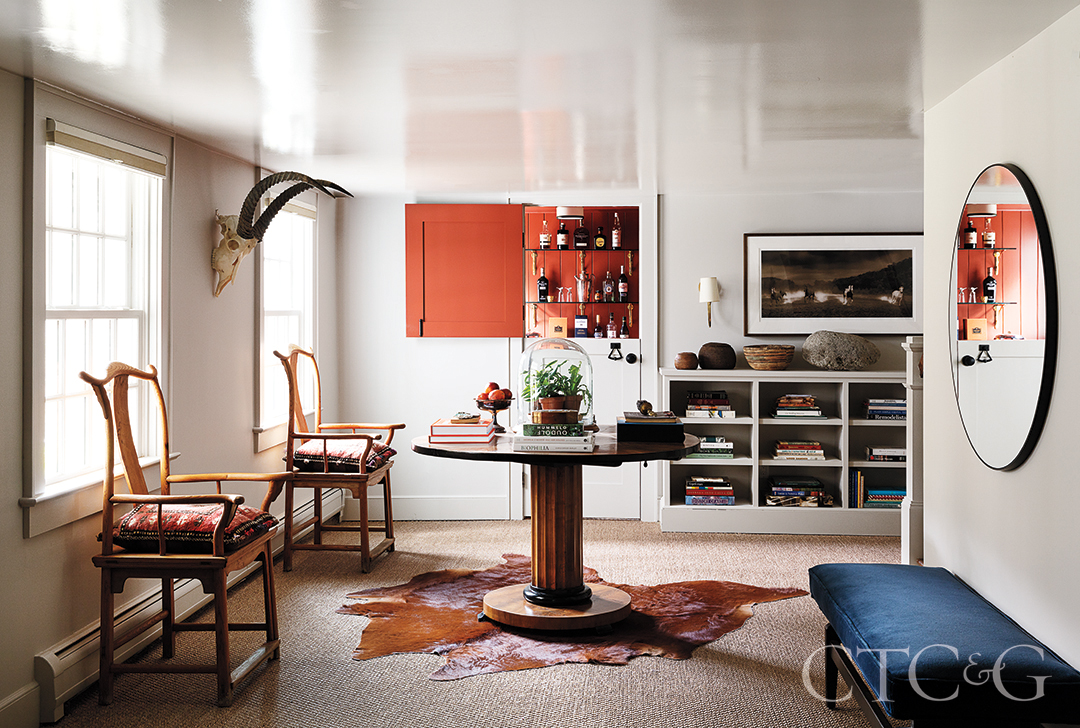 In the family room, Hendricks purposely chose a high-gloss paint, Farrow & Ball’s Ammonite, as a way to visually raise the ceiling and infuse and animate the room with reflected and refracted natural light. Antique Chinese chairs through Montage face off against a midcentury Jens Risom bench. ART Architects created a Dutch door to access the bar. Photography by Tim Lenz

McConnaughey, who works as a Connecticut Realtor following a long career as a flight attendant for Delta, refers to Hendricks as “the best therapist a girl could have.” While the homeowner has a special talent for staging interiors for prospective home buyers, she admits to never before hiring an interior designer. After a thorough search for the right designer, she and her husband chose Hendricks after viewing her previous projects. “David and I were struck by her sense of colors, the way she uses them, and her ability to tell the story of a home and its occupants. Every one of Heide’s projects relates a narrative.”

The McConnaugheys had stories they wanted to tell—and still make— with their home, which they purchased in 2018. Both came to the home with objects collected separately over the years—he with such things as vintage duck decoys and his mother’s black lacquered Baker furniture and she with a variety of objects amassed from her world travels.

The existing accessories and furnishings made for a home, according to Hendricks, that “felt like it had already been lived in, but which was also fresh.” Of her relationship with the couple, she adds, “We synched right away and discovered early on that many of the resources on her wish list were already on mine.”

Both Hendricks and the homeowners recognized the biggest interior design challenge as being the first-floor family room, situated at the rear of the house (the house is entered, essentially, on the second floor, with the land sloping to grade at the rear).

What appeared to be a dim, low-ceilinged, basement-like space has since been transformed into a light-flooded family room with direct access to a terrace, the grounds, and, eventually, the river-banks. Hendricks chose a high gloss paint for the ceiling, a visual trick that made the room feel far taller. “The glossy finish reflects light off the river and bounces it around onto the surfaces,” says Hendricks.

To make the room extra accommodating for the couple and their guests, a former closet was renovated to house a bar—a space concealed by a Dutch door. A living room of equal size, situated directly above the family room, features built-in bookcases, a stone fireplace, and a novel breakfast nook at one end. 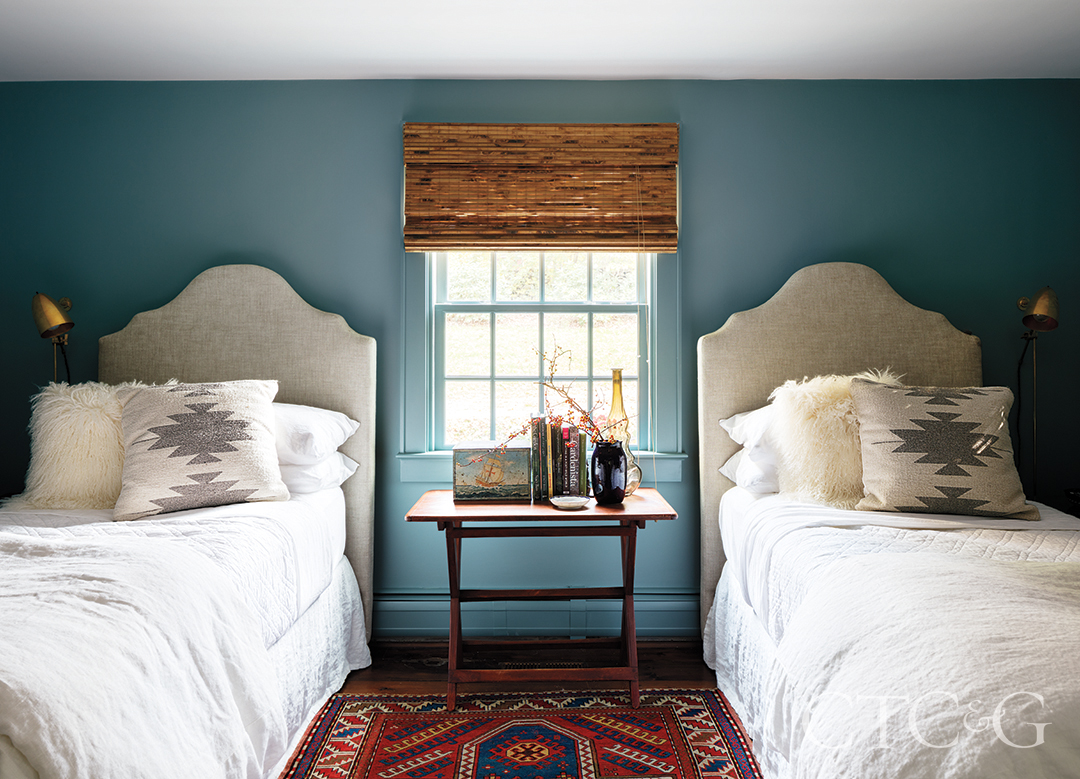 “Having a bistro table with chairs at one end didn’t make sense to me at first,” admits McConnaughey, “but Heide is so smart that she knew we’d be at that table all the time.”

McConnaughey—who reads a lot of poetry and tends to see her home and its surroundings as a kind of visual poem—remains aware of the effect Hendricks’ design has had. “Heide took a snapshot of how we wanted to live in the house, and we’re now living the movie version of it. My whole life, I’ve always been searching for a completed home, until now that is.”

The print version of this article appears with the headline: Forming a Narrative.
Subscribe to C&G

This article appears in the July/August 2021 issue of CTC&G (Connecticut Cottages & Gardens).