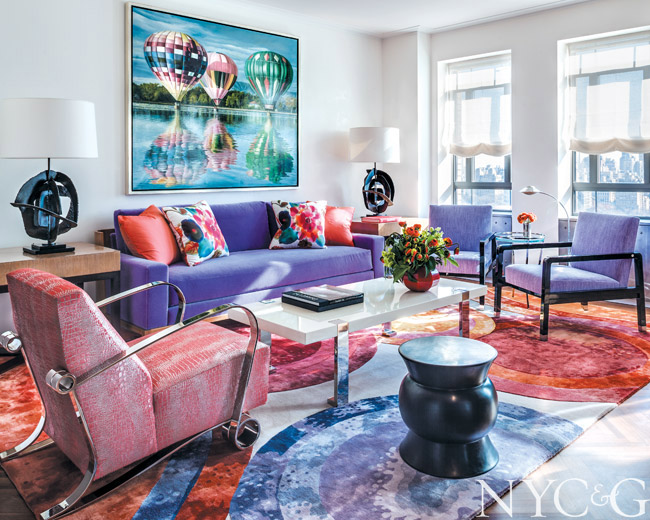 It’s funny how events can unfold: A decision firmly made can, upon reflection, turn out to be completely wrong. One Manhattan couple made this discovery after interviewing designer Jamie Drake about undertaking the renovations on their apartment on Central Park West. Upon choosing to go with someone else, they found themselves calling Drake one year later to rescue them from what was, at least in the short term, an ill-fated decision. The two-bedroom condo—which the European family had been using for occasional jaunts to New York City—had been totally gutted during round one, before the owners switched designers. Once Drake signed on, another overhaul took place. “Absolutely everything” in the apartment is brand new, Drake reports.

“It was complicated, to say the least,” adds the New York–based designer, who is known for his use of color and ability to toggle between styles with ease. The original layout had the bedrooms and bathrooms on the park side of the building, with the living room, dining room, and kitchen at the back, facing Broadway. “It just didn’t address the Central Park views in any way,” says Drake, whose biggest challenge was to reinvent the floor plan so that the rooms most in use would have a vista over the trees toward Fifth Avenue, while the private quarters could remain at the back. 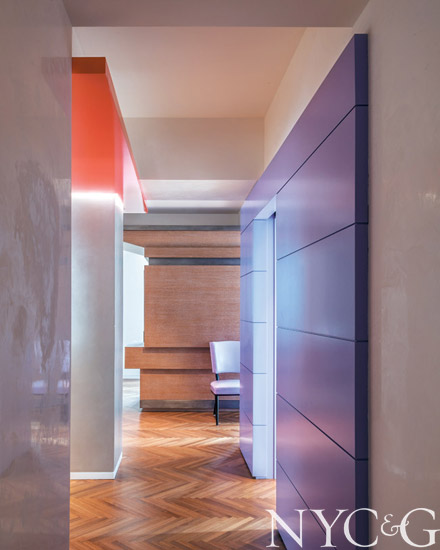 This was, however, just the beginning. “It created certain plumbing challenges,” says Drake, understating the often sizable roadblocks design can present in the real world. After relocating the three bathrooms, Drake was left with a grouping of pipes rising directly between the newly placed living and dining areas. In a clever move, he wrapped the morass in horizontal panels of cerused oak and strips of natural steel, a strategy of using contrasting textures and materials, something he employed throughout the home. The new freestanding unit does double duty, providing storage and acting as a quasi-entertainment center for the family.

A designer celebrated for his somewhat unorthodox palettes, Drake was happy that the homeowners wanted a modern residence full of light and color. “And because they have twin adolescent daughters, they wanted it fun,” he says. They even specified a custom rug based on a Drake design for Roubini. 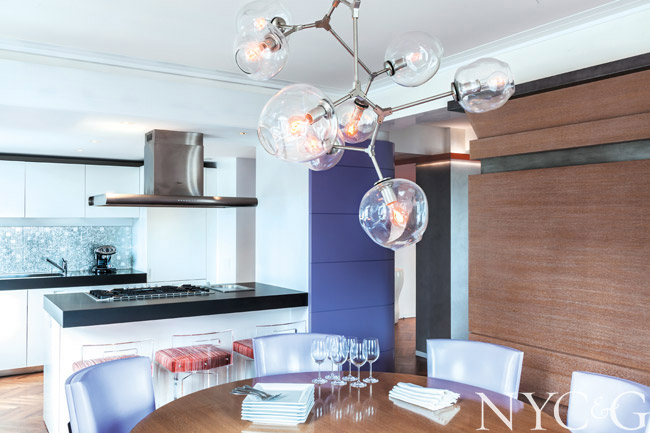 Despite a few nods to the past, the atmospherics overall are thoroughly modern, especially in the choice of furnishings. Drake first livened up the architecture with a variety of finishes, from satin and lacquered wood to Venetian plaster and even aluminum leaf. The high-gloss coral ceiling in the living room gives the space below the appearance of a foyer, sans walls. Plush textiles used on the upholstered pieces add to the buoyancy, and softer fabrics, such as roman shades, balance stronger elements like a lacquer and metal coffee table and a pair of Brutalist lamps from the 1960s. “We introduced a playful sophistication to all the rooms with the palette, the furniture, and the art,” says Drake, adding that “the best thing in the world is well-informed clients who know what they want. They did their research, which made it very easy for me.” And in what might be the biggest compliment a designer could receive, Drake’s clients liked his work so much, they have since decided to make New York their permanent home.

A version of this article appeared in the May/June 2014 issue of New York Cottages & Gardens with the headline: Drake's Passage.