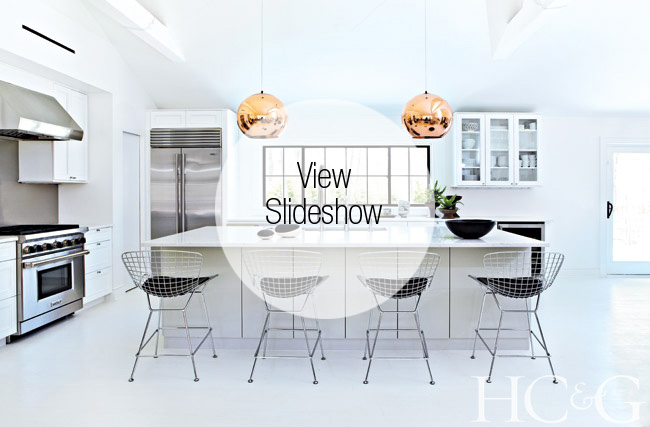 The saying “good things come in small packages” proved true in a big way for interior designer Maureen McDermott, the good thing being a cozy Sag Harbor rambler she recently took from mid-20th-century mundane to a family retreat kitted out for 21st-century living. “It was this dreary, closed-up house—a tiny yellow ranch,” McDermott recalls. “The interior was really dark, but the layout was compact, with bedrooms that are close together—which is great when you’re up during the night with small children. I just knew it had the bones to be something amazing.”

McDermott grew up in the “beachy sailing community” of West Islip and later studied art history at SUNY Albany and interior design at NYSID. After stints working for New York–based architect Francesca Russo and as a designer for Vicente Wolf, she found herself yearning for more flexibility for both her growing family and her design firm, Winter McDermott Design. With parents who lived in Westhampton already, she and her husband, Michael Henry, a technology executive, decided to decamp from their Brooklyn digs and set their sights eastward. After a long search, they found just the spot in Sag Harbor, only five minutes from the village.

The couple were attracted to Sag Harbor’s small-town feel, its organic supermarket, easy beach access, and plethora of parks—all ideal for young families. They especially “wanted to live in Sag Harbor because of the schools,” McDermott adds. “My son, PJ, will be able to walk there.”

After closing on the 1,600-square-foot house, the couple moved right in, despite fully realizing that it was in desperate need of a makeover. McDermott knew walls had to be torn down in order to create a better flow—in other words, lots of construction was in order. She waited more than six months for permits and another six for the improvements to be completed—all while pregnant with her second child, daughter Winter.

McDermott’s changes to the basic footprint included moving the front door from its location next to the fireplace and turning a former breezeway into an entryway. She put a lofty vault in place of the eight-foot ceiling in the living room and installed large casement windows that resemble those typically found in light-filled industrial lofts in Brooklyn. Suddenly, the dingy ranch was all about bright, open space.

Making the home kid-friendly was also on the designer’s agenda. “We like to be with our kids and entertain,” she says, explaining that except for precious objects and artwork hung out of reach, the house is almost completely outfitted with easy-to-clean wool rugs and upholstery fabrics. “I was so worried that my son would come back into the house after we renovated it and not recognize anything, so I spent a long time trying to figure out what would make him excited, such as the bed in his room. It’s like a little fort he can play in.”

As for the decorating palette, McDermott adhered to neutral hues with a few blue accents, mirroring her former mentor Wolf’s love for simplicity and streamlined design. To mix things up, she threw in a few hip touches. “I’m more dramatic, while Vicente is more serene,” she says, acknowledging the statement-making Tom Dixon pendants that hang above the kitchen island.

Now that she’s living in a coastal town once again, life has come full circle for McDermott. “Our windows face north, to the reserve beyond,” she says. “It’s not the beach, but we love knowing that we can get there in a matter of minutes.”

A version of this article appeared in the July 15 2015 issue of Hamptons Cottages & Gardens with the headline: Ranch Dressing.