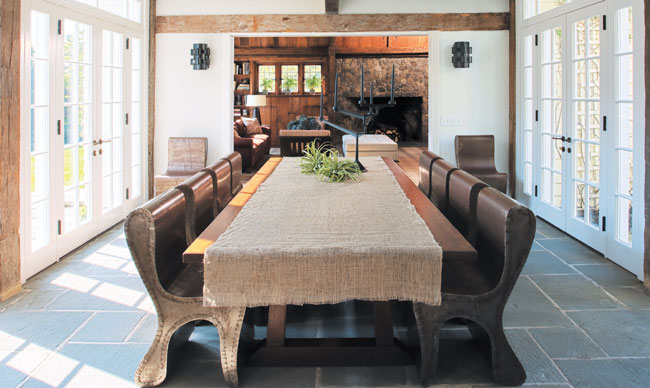 After 10 years of working in London, an expectant thirty-something couple decided it was time to come back across the pond. Their search of Litchfield County led to the purchase of a meticulously renovated early 1800s farmhouse meant to serve as the weekend country counterpart to their ultramodern full-time Manhattan digs. The duo then charged interior designer Shawn Henderson with the task of having the rambling 8,500-square-foot Colonial turnkey in time for the arrival of their firstborn.

“They showed up with their clothes, an old steamer trunk, a Danish desk and a very modern art collection, and asked me to take it from there,” says Henderson, whose client list includes Glenn Close and Will Ferrell. He placed the trunk in the master bedroom, the desk in the study and opted to deal with the contemporary art at another time. “I don’t believe in designing rooms around artwork, so we left hanging paintings until the end.” 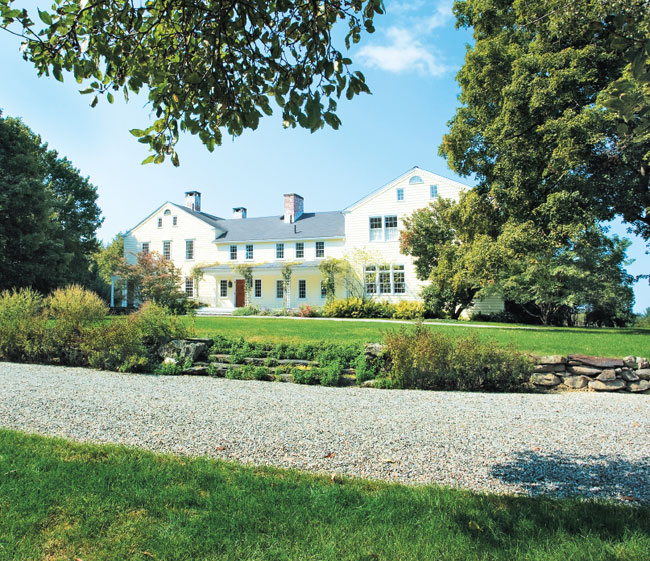 First up was developing a design scheme for the vast array of rooms (“so many we ran out of names to call them,” says Henderson) that worked with the venerable architecture. He didn’t have to look far for inspiration. “The barrel vault in the old barn that houses the living room is so beautiful and has such character that I used the orange tone of the wood as the starting point for the muted earth-tone palette,” he says about the pumpkin-orange, faded-avocado-green and rusted-red color scheme.

According to the designer, it was the utilitarian aspect of the barn that drove him to introduce industrial elements like the brushed-iron lamp in the living room and a metal coffee table in the family room, which he then mixed with Americana furnishings. “The first thing I bought was a Stickley dining room table because the arts-and-crafts style made sense with the house, and it fit the large space so perfectly,” says Henderson, referring to the breezeway/dining room that connects the 19th-century barn, which was moved and attached to the main building in the 1930s, to the rest of the house. 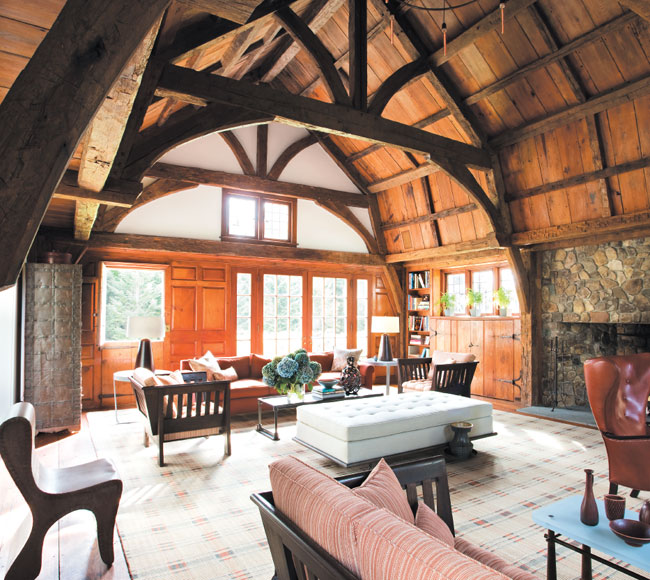 “They showed up   with their clothes, an old steamer trunk, a Danish desk
and a very modern art collection, and asked me to take it from there”

Steel chairs by French artist Pierre Abadie surround the table and create an intentional style juxtaposition. “They are so outrageous. I just love the dialog between them and the table,” says Henderson, who admits to an obsession with sculptural seating. “I especially love the wingback.” His not-so-subtle love affair with that iconic form plays out with a cast of international iterations including a vintage French version in the living room, a pair of Hans Wegner “Papa Bears”—the perfect complement to that Danish desk—in the office and an Italian model sporting red and black plaid in the nursery.

Unlike the typical center-hall Colonial defined by lots of small but distinct spaces, this one featured overscaled rooms (a major selling feature for the owners) that mandated furnishings to match. In the living room, it took two seating areas filled with several chairs, a sofa, settee and a daybed to offset the commodious room and soaring ceiling. In the 30-foot-long master suite, the scale issue was addressed with a 10-foot sofa and a pair of oversized French club chairs from the 1940s. And in the guest room, a four-poster gold-finished hammered-steel bed holds its own. 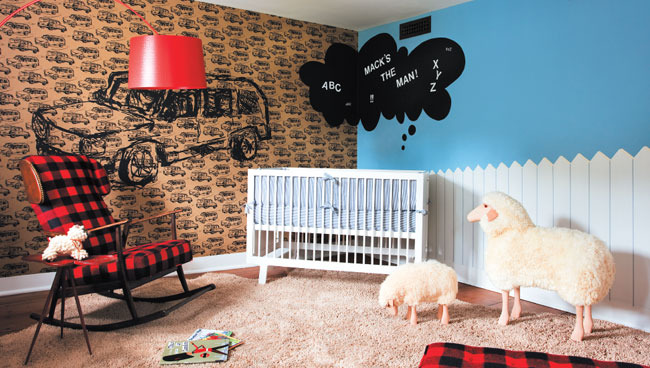 With the exception of the living room and master suite, all of the spaces are grounded with what the designer calls “honest American braided rugs,” with threads that match the fabrics in the room. “The massive vault in the living room and the size of the master called for a bolder pattern on the floor in those areas,” he explains.

And when the day arrived to place the homeowners’ impressive art collection, the work of contemporary luminaries like Christian Marclay and Sarah Morris fit right in. “We spent a day figuring out what went where,” says Henderson. “The furnishings and mid-century antiques combined with important works of modern art resulted in a fresh take on the country home.”