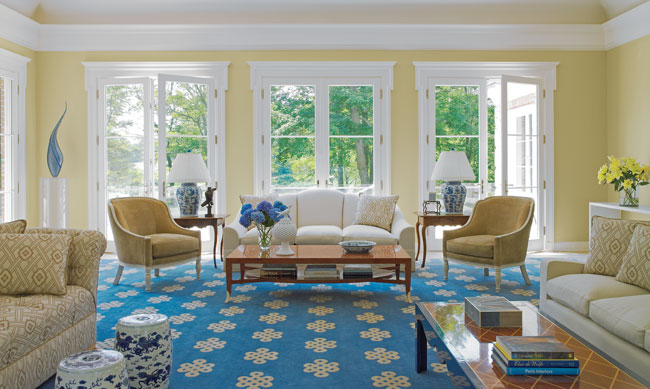 Interior designers William Diamond and Anthony Baratta have built a solid reputation designing grand-scale residential projects often punctuated with broad strokes of color. But according to Baratta, the infusion of bold hues that many consider their signature emerged more by circumstance than intent. “People think we only do Technicolor projects, but our goal is always to give our clients exactly what they want,” he says.

In fact, a recent endeavor—an ambitious renovation of a 1970s ranch on five acres in Greenwich that doubled the size of the existing house to 12,000 square feet—more than proves that point. At the owner’s request, the design team created uncluttered, elegant interiors with a restrained neutral palette: “Soothing, nonthreatening colors,” says Diamond, accented with refreshing touches of blue. “It’s always a challenge to keep a palette that limited, but our client really wanted creams and beiges, and really loves blue,” he adds. 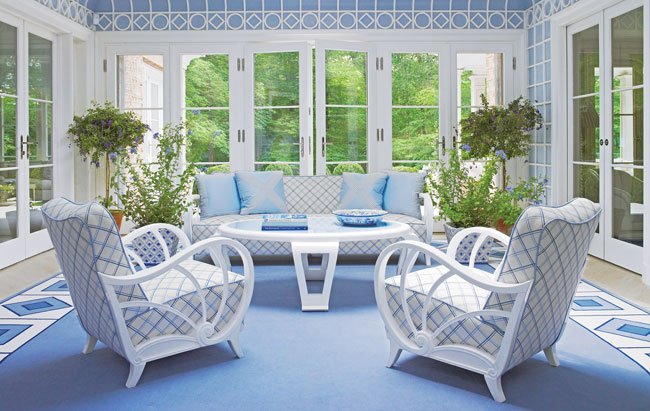 Nailing down the color scheme began on the home’s exterior where a new façade of light brick and stone, coupled with the brilliant turquoise of the swimming pool, established the plan for the entire project. Inside, the neutral tones took on a variety of guises appearing in the taupe living room walls (“It took three shades of paint to get the color just right,” says Diamond): the cotton-check chair backs in the dining room where the custom striped wallpaper is two taupe tones, the beige and white glass kitchen counters, and the herringbone pattern cerused oak floors seen throughout the house.

The tone-on-tone backdrop freed the designers to seek inventive ways of brightening the rooms by introducing varying shades of indigo. In the living and dining rooms, custom rugs based on patterns from the Ming era add texture and a welcome jolt of color. “The very early Chinese patterns were extremely modern,” says Diamond.

An unexpected shift occurs in the sunroom, where the accent color takes center stage. Here, bright blue walls highlight the unique white wood trellis wall treatment, the sky blue rugs are edged with statement-making geometric patterns, and even the game table is blue. Similarly, in the master bath, azure is pervasive. The vanities sparkle thanks to surfaces of blue reverse-painted glass surrounded by mirror, and the high-gloss lacquer walls framed by white pilasters shimmer as well. “The shiny, shiny blue walls are almost like a mirror,” says Baratta. 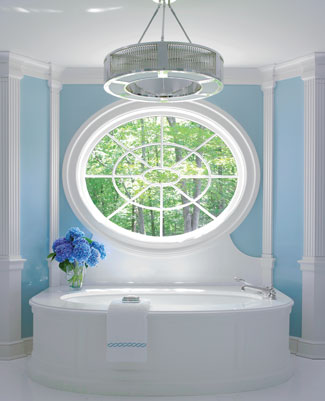 Also critical to the overall plan were interiors devoid of fussy detail, with a measured French accent. Inspired by the work of design great Billy Baldwin, known for his love of French design but disdain of the florid, the duo followed similar tactics. “He took a spare approach while maintaining a French vocabulary and we did the same,” says Diamond, noting the banks of huge French doors in the living room. “They’re still French, but the limited use of mullions keeps them clean and simple.”

The European influence also appears in the larger scale furnishings like the living room bergères and the French Art Deco-inspired dining-room table. “Ultimately, the house went from a ’70s ranch to something like a chateau,” says Baratta.

Key to the overall transition were the architectural cues supplied by architect Jim Schettino, who started the renovation by taking the roofline from the existing structure and running with it. “The original ranch with its mansard roof just lent itself to doing a French-style house with mansard roofs throughout,” says Schettino, who added a mudroom, guest wing, and an expanded master suite for a total of five bedrooms and five-and-a-half baths. The casement windows with lead-coated copper arch vaults, cast limestone surrounds, and solid granite slab steps are also in the continental vein. “It evolved into a classical house,” he adds.

The collaborative effort defined by strict adherence to the established palette resulted in a cohesive home where the rooms flow easily from one into another. “With the same color scheme both inside and out, from the moment you enter, the whole house is singing the same song,” says Diamond.