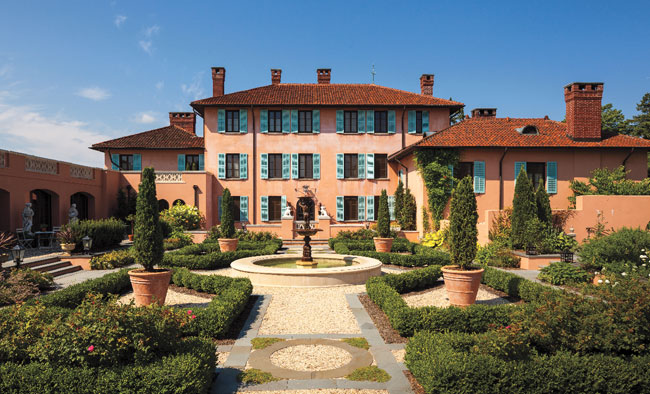 The sheer beauty of this Tuscan-style villa is but one of the many reasons visitors and overnight guests are left with dropped jaws. Built in 1910, the 35-room rose-colored manse was commissioned as a country home for wealthy industrialist Robert Goelet, whose first wife sought to re-create a villa she had seen while on their honeymoon in Italy. Today, it is owned by Dr. Dan DeSimone and Alan Stenberg of nearby Tuxedo Park and is part of the esteemed Relais & Chateaux hotels group, earning its spot in just one year since opening. Having undergone a multimillion-dollar restoration and renovation, the 18-room guesthouse features exquisite interiors that serve to highlight the building’s turn-of-the-century bones, such as the iron fretwork on the cortile’s staircase done by Samuel Yellin, intricate crown moldings and a pair of solid marble fireplaces from early 19th-century England in the living room. The décor offers a mix of precious antiques with striking modern lighting pieces and a warm palette of creams, maroons and grays. An impressive modern art collection is courtesy of silent partners Alison and Peter Klein, while elegant details like cashmere curtain panels, hand-painted mirrored screens in the dining room and an onyx bar define the mansion’s remarkable refinement. The exterior is no exception. Its pink hue and meticulous landscaping continue to strike a profound pose against the bucolic backdrop—just as its original landscape designer, the renowned, first female landscape designer Beatrix Jones Farrand intended. 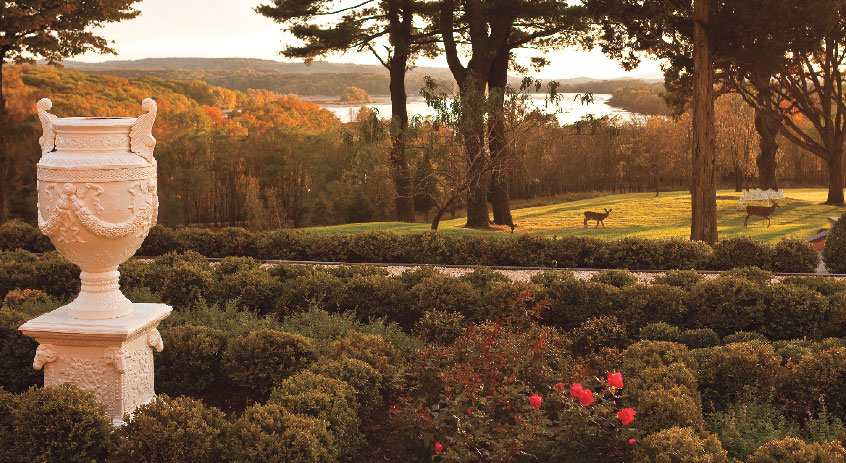 Master Plan
Visitors need not wait long to view the genius of Beatrix Farrand’s designs at Glenmere. The driveway at Glenmere, originally a point of contention between Farrand and owner, Robert Goelet, winds around the entire property prior to pulling into the front entrance.  Typical of the English style, the meandering approach ensures that the estate’s towering prominence over the surrounding land is glimpsed by all arriving. Accented by butterfly bushes and blue and purple allium, it is not only striking but also invites a sense of calmness.

Designed by architects Carrère and Hastings, who collaborated with Farrand on various private estates, the mansion was one of the country’s finest homes, playing host to dignitaries and celebrities throughout the Gilded Age, who often congregated on the lakeside terrace, an intricate part of Farrand’s landscape design. Her border gardens lie right at the terrace’s edge. Done in an English-style with Italian accents, the gardens are now filled with boxwood hedges surrounding perennials such as shrub roses, lavender, daffodils and chrysanthemums. Farrand was known to favor patchworks of color and even a bit of starkness in the winter, which she thought was accented by the snow. Due to the rise in the deer population, the gardens must rely more on boxwood than the evergreens of Farrand’s designs. Yet, otherwise, the gardens have been carefully replanted to reflect Farrand’s original drawings, which DeSimone sought out from her archives at the University of California at Berkeley.

MEG’S TOP THREE
1. I could have happily spent an entire afternoon in the bathroom in my room—the Vanderbilt Suite. Clad in Carrara marble, with a large shuttered window overlooking the grounds, the spacious bathroom boasts a gas fireplace, flat-screen TV, a steam shower and a sink basin of intricate Moroccan tiles.

2. Enhanced with Moroccan design, including a Hamam and wet room, the spa feels wonderfully spacious despite only five treatment rooms, though the size of each, particularly the couples’ suite, far surpasses its peers with en-suite dressing rooms, steam showers and sunken whirlpool tubs for body treatments.

3. During renovation, landscapers discovered one of the original 18 stone-carved fruit baskets used as finials along the walls of the Roman gardens. The completely unscathed basket is now the insignia of Glenmere Mansion and has been placed atop a pillar in the sitting gardens for all to appreciate. glenmeremansion.com.