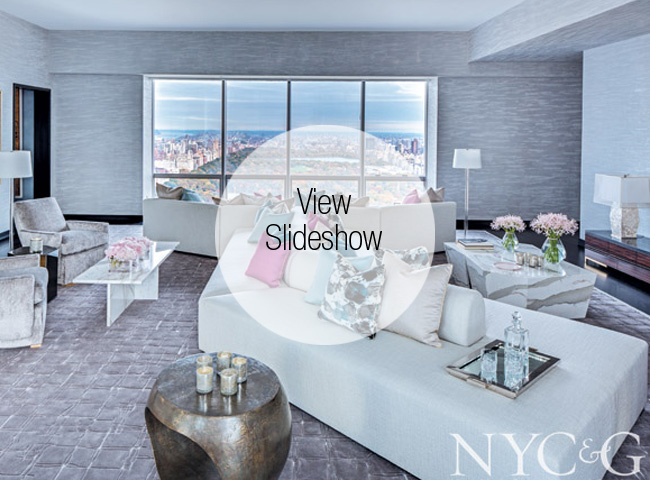 While One57, the 90-story residential tower that the Extell Development Company recently erected across the street from Carnegie Hall, left little to chance, the recruitment of top New York designer Jamie Drake to create the building’s luxurious model apartment came from an unscheduled meeting in the lobby.

One57 was in the planning stages for more than 15 years. That’s how long it took Extell president Gary Barnett to lock in the property and the air rights, at a reported cost of $260 million and 18 separate real estate deals, before work could even begin. The structure, designed by Pritzker-winning architect Christian de Portzamparc, has its critics, but it appeals to Drake, who calls it “a great, iconic, very ‘New York, New York, It’s a Wonderful Town’ building for our time.”

The decorator, whose high-profile customers have included Michael Bloomberg and Madonna, happened to be on site at One57—at 1,004 feet, the 14th-tallest structure in the U.S.—because he is designing a full-floor residence in the skyscraper’s upper reaches for a private client. Fortuitously, Barnett and Drake ran into each other one day, and the rest is history. (They had met previously, when Drake designed the living room for the 2012 Kips Bay Showhouse at the Aldyn on Riverside Boulevard, a Barnett property.)

“Gary asked me casually for my advice on something in One57’s lobby,” Drake says, “and I told him, ‘No, it doesn’t work.’” Shortly thereafter, in May 2014, the decorator was enlisted to design the 4,200-square-foot, three-bedroom model unit that occupies half the 58th floor. As of press time, the building is now about 80 percent sold, to the tune of approximately $1.5 billion—bolstered by last month’s $100.5 million sale of the duplex on the 89th and 90th floors, a record for a New York City condo.

The brief, says Drake, was similar to one he would get from any client. “Of course, they wanted something that would appeal to a broad array of prospective buyers. They wanted to keep it gender neutral. They weren’t afraid of color, but they didn’t want to be overwhelmed by it, either. And they wanted it to have the same quality and international sophistication as the building and the Park Hyatt hotel, which occupies the lower 40 floors”—and which was designed by the well-regarded hospitality firm Yabu Pushelberg.

“Naturally, the design is all about the views,” Drake adds. “I tried to set the tone in the foyer with the idea of a glittering sky, a unique celestial occurrence. I was thinking of meteor showers and planets, which is why there are so many round shapes in the entry.”

The cosmic theme is carried throughout the apartment, particularly in the high-sheen fabrics (silk, satin, velvet), lacquered woods, lunar-hued marble, metallic accents, and luminescent wall treatments by Jonathan Kutzin of America Painting, with whom Drake often collaborates. The paint in the living room has a top coat that contains white Japanese mica, and in one guest room the celestial paint color gets a helping cosmetic hand with the addition of eyeshadow.

Drake’s astral-inspired model apartment is on the market for $27 million unfurnished, or lock, stock, and glamorous barrel chairs (minus the paintings and sculpture) for $28.5 million. (The artwork would run another half million or so.) For potential buyers who aren’t quite ready to make a seven-figure down payment or find the 58th-story views of Central Park merely ho-hum, just wait until Barnett’s next building goes up. He has already broken ground on a new tower to the west of One57, which is planned to be even taller than One World Trade Center’s 1,776 feet—and as close as you can get to the moon over Manhattan.

A version of this article appeared in the March 2015 issue of New York Cottages & Gardens with the headline: One57 Wonder.