John Lennon and Yoko Ono were largely seen as a New York couple. They notably lived in an apartment at the Dakota, a landmarked Upper West Side building where the former Beatle was tragically assassinated. But they did venture from the 212. In 1980, mere months before Lennon’s untimely death, the couple purchased a Palm Beach mansion on South Ocean Boulevard known as “El Solano.” Now on the market asking $47.5 million, El Solano is an oceanfront palace with a surreal artistic connection and lavish presence.

Lennon and Ono meant for this property to become their private retreat, originally planning to renovate the home together according to the Wall Street Journal. The book Pop Culture Florida by James P. Goss claims that after Lennon’s passing, Ono undertook the project herself. Soon after in 1986, she sold the property. 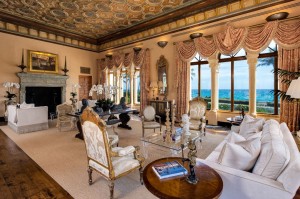 Today, the seven-bedroom, Spanish-style mansion spanning 14,145 square feet still oozes opulence. It was designed by famed architect Adam Mizner and built in 1925. At almost a century old, the home retains its ornate architectural details and grandiose spaces. Not to mention, the 1.3-acre lot also includes a tennis court, two swimming pools, a three-car garage, and a beachfront cabana.

The location is also high-profile. South Ocean Boulevard, a slender strip of coastline just a stone’s throw from President Trump’s Mar-a-Lago, counts a series of billionaires and multi-millionaires as part-time residents. The WSJ reports that Blackstone CEO Stephen Schwartzman and singer Rod Stewart have homes on the stretch, and El Solano is adjacent to a property owned by author James Patterson.

The former first lady spent many summers at this shingle-style home owned by her Bouvier grandparents at the time.