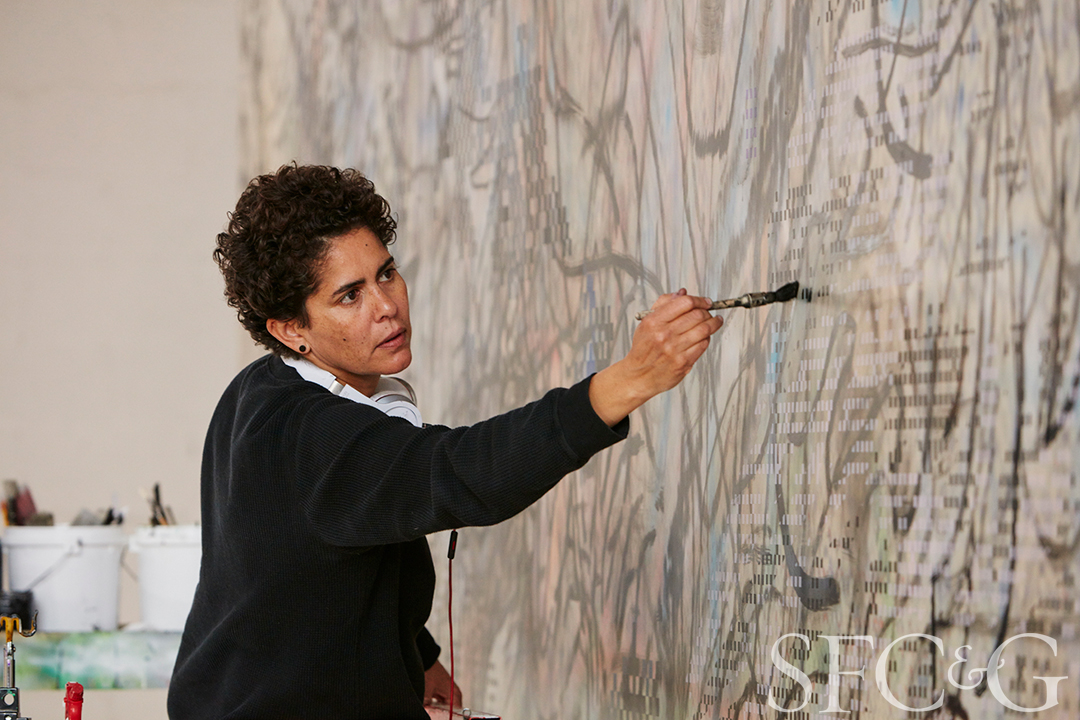 “I’d describe the scale as Michelangelo-esqe,” says SFMOMA director Neal Benezra of the immense work that now defines the museum’s third street atrium. The churning expanse of calligraphic lines, a two-story diptych titled Howl eon (I, II), was created by New York painter Julie Mehretu to adorn the walls flanking the grand staircase. Among the most significant artists of her generation, Mehretu is known for abstract paintings that reflect the speed and interconnectivity of 21st century culture. Overlapping formations of gestural marks, rendered in acrylic paint and sumi ink, surge across appropriated images like maps and architectural drawings in her work—visual metaphors for complex ideas like migration, global networks or political conflict. Commissioned by SFMOMA, Howl explores notions of the American West: The two paintings, each 27-by-32-feet chart an epic through-line of innovation and destruction, ranging from westward expansion, to the social unrest of the 1960s, to Silicon Valley’s technological reign—all overlaid with a flurried language of strokes and lines that aptly voices the collective confusion of our present moment. 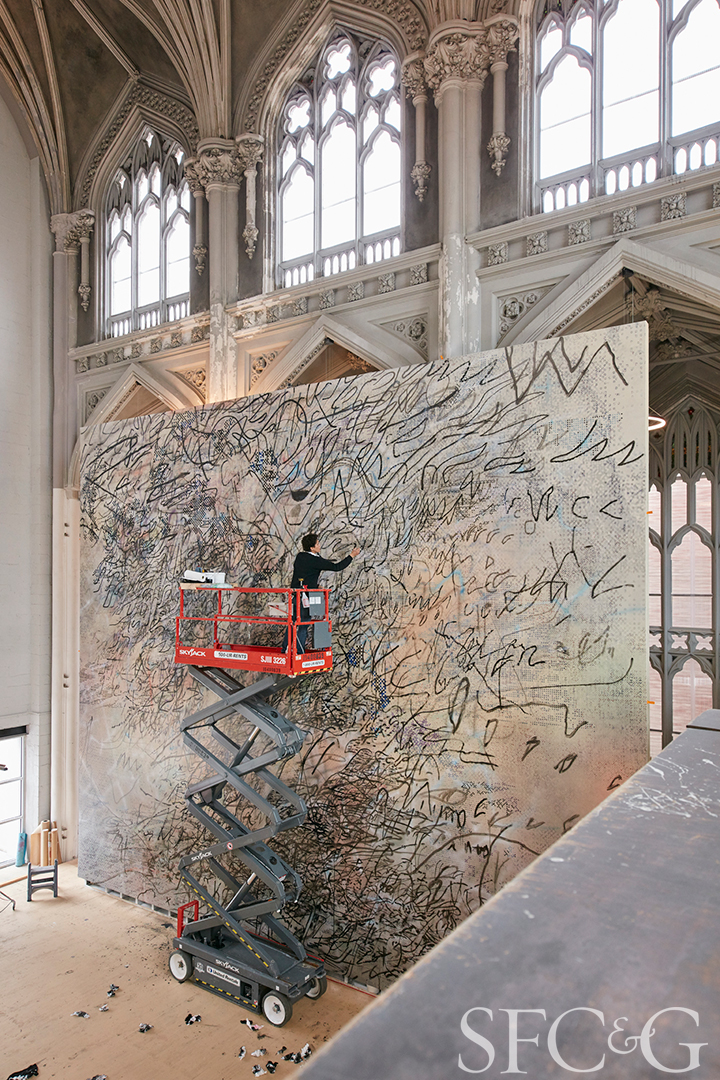 Howl marks a stylistic turning point for Mehretu. “If her earlier work is the mark of a hand, this is the mark of an arm,” says Benezra, referencing bigger, bolder brushwork. The painting’s narrative inspiration is also a departure. “California’s natural landscape and social history guide the work rather than urban architecture,” notes SFMOMA assistant curator Rachel Jans, who helped oversee the project with senior curator Gary Garrels. “In response to the Bay Area’s sublime natural setting, Mehretu began to research depictions of vast western landscapes in 19th-century American paintings and mixed them with abstracted images of contemporary street protests,” says Jans.

The mammoth piece signals a new direction for SFMOMA as well. Distinct from previous commissions for the atrium space—Sol LeWitt’s swooping arcs of color and Kerry James Marshall’s hide-and-seek depictions of Mount Vernon and Monticello—Howl is not a mural but two canvases stretched and stapled to the wall. Jans notes, “Instead of painting over the works, we’ll be able to roll them off, store them, and show them again.”

The trick for Mehretu was finding canvas large enough to accommodate the piece. “It’s very unusual to have a painting this size on a single piece of cloth,” Jans says, noting the artist had to search around the world for a manufacturer.  The canvases were also too large to fit in Mehretu’s Chelsea studio, so she and a squad of assistants executed the piece in the cavernous nave of a vacant church in Harlem, working on hydraulic lifts over the course of a year to slowly build up some 20 layers of screen-printed imagery, clear acrylic, hand-drawn lines and erasures.

The work, highly anticipated by the global art community, debuted at SFMOMA on Labor Day weekend. Of the newly transformed atrium, Benezra notes, “It completely changes the feel of the space. Visitors normally pass right through there, but this should stop them in their tracks.”

A version of this article appeared in the October 2017 issue of SFC&G (San Francisco Cottages & Gardens) with the headline: A Virtuosic Entrance.