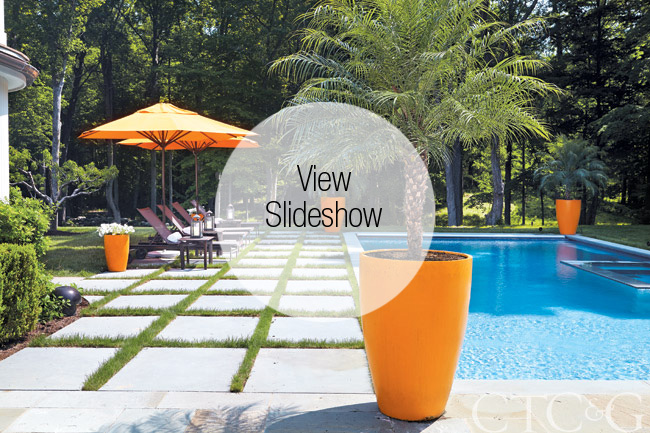 Raising three teenage boys in a 3,600-square-foot, four-bedroom home isn’t quite close quarters—even less so on four acres in Greenwich’s backcountry. But it isn’t exactly an easy-living ideal, either, especially when Dad describes his sons as “active, very active,” and he himself possesses passions for cooking and wine, cars and athletics. So when it came time for designer Kerry Delrose to renovate and expand the 1960s-era center-hall Colonial he’d previously updated for father and sons—which CTC&G featured in 2010—he and the homeowner sought to create a spacious, comfortable but sophisticated home with more than enough room to accommodate all the various needs and desires of that active lifestyle. As for the aesthetic, it would be more modern, clubby, Ralph Lauren cool than chintz- and tchotchke-covered countryside chic. “I don’t like a lot of clutter, and the client doesn’t either,” explains Delrose, who’s something of a contemporary classicist. “And with three boys, you need clutter like a hole in the head.”

Delrose began by nearly tripling the home’s size to more than 9,000 square feet, adding an entire new wing. Pivoting off the original structure at 90 degrees, the addition comprises a wine room, three-car garage and enlarged kitchen on the ground floor, followed by three ensuite bedrooms and an expanded master suite above. And then there’s the new basement, with screening room, gym and game room centered on a custom pool table.

The designer remembers soliciting the homeowner’s wish list: “I said, ‘Just tell me everything you want. You may not get it, but tell me.’ He’s the rare client who really did tell me everything he wanted, and he actually got it all, too.”

Even with a full list of must-haves, for this homeowner, having it all really began and ended with his new ultra-gourmet kitchen. An amateur but highly skilled cook, the owner kitted out the space with what he describes as “just about every fun and almost-professional-level appliance out there”—a Gaggenau oven with separate steam unit, an induction-top stove that “boils water in a second,” La Cornue rotisserie, even a wood-burning brick pizza oven, which he uses for making all sorts of roasted dishes, well beyond pizza.

Delrose designed the gourmet kitchen to maximize ease of entertaining: What he describes as “probably the largest island ever made out of Caesarstone without a seam” invites family and guests to gather around during dinner prep, allowing the chef to remain included in the party. And the entire room opens onto a large oval table finished with 14 coats of gray automotive paint that comfortably seats eight.

That table stands just in front of what may well be the extension’s greatest feat of engineering: a curving NanaWall that folds open and disappears, directly connecting the kitchen and informal dining area to the patio, yard, new pool and freshly planted fruit orchards. “Walls of glass don’t really move on a curve and push back into a wall,” Delrose says of the technological innovation required to make this wall work.

Delrose and his team made it work, however, just as successfully as they met another big challenge: integrating the addition with the original part of the house. As he describes it, it was a question of “taking something old and creating something new, making it seem like it was always this one house.” The designer’s solution was wrapping the entire expanded structure—including the Colonial white-clapboard original—in white-trimmed gray clapboard with navy shutters, a look he describes as “very Nantucket.”

Now, says the owner, the only thing that has surprised him and his family about their new home is how perfectly it all works with their needs. “I wouldn’t change anything about it,” he concludes. “We’re all done.”

A version of this article appeared in the June 2015 issue of Connecticut Cottages & Gardens with the headline: For the Boys.