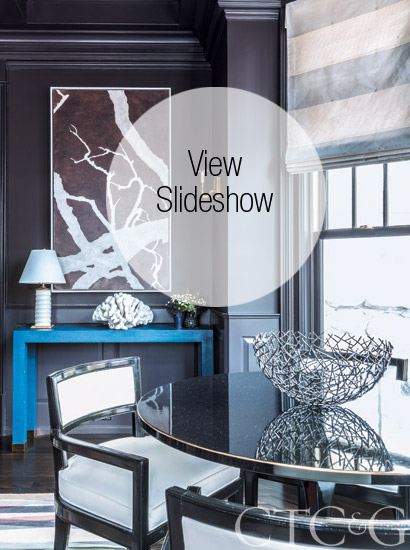 The shoes were fabulous, naturally, but after five years, it’s still the sets of the Sex and the City movie and its sequel—especially that envy-inducing closet Carrie shares with Big in Sex and the City 2—that design lovers covet. The vision behind the set that launched a thousand swoons belongs to Lydia Marks and Lisa Frantz of Marks & Frantz, a New York City–based design firm whose movie sets have residential clients knocking down their door. A Greenwich homeowner approached the pair not just for the closet but also for the designers’ signature high-voltage glamour coupled with functionality. For the designers’ second collaboration with the client, they were charged with updating the interior of a classic Colonial into something a little more bold and unpredictable. “We wanted to do Greenwich, but in a funky way. We carried over a lot of what we had [from the previous house] and tried to be resourceful,” says Frantz. “We pulled together classic looks and shapes because the house called for it, then we put it together in a more contemporary fashion.”

With the help of Davenport Contracting, the designers opened up the flow of the downstairs by raising the sunken family room to hearth level—a change that improved flow without radically reconfiguring the layout. Marks and Frantz saved the big oomph for the decorating: employing unusual color combinations and an interesting mix of materials with modern and vintage furnishings to complement the house’s more traditional bones. One of the more classic rooms, the kitchen, gets gussied up with brass and silk velvet stools—pieces that would look right at home in a dressing room—surrounding a 10-foot-long island. A Sputnik chandelier hangs over a more serious kitchen table. “We like to push the envelope a bit by mixing vintage with modern,” says Marks.

In the living room, show-stopping deep pink curtains with double-tassel fringe pop against black silk walls. “We had the white sofas from the previous house and they were the perfect size. We knew we weren’t going to do a white room, so we picked a color and went with it. We wanted to do pink without being girlie,” says Frantz. “If you are going to use a brave and bold color,” adds Marks, “you have to carry it through.” The dining room, too, screams of the designer’s go big or go home attitude with deep yellow polished cotton curtains with a soft ruffle detail (inspired by a dress). “We wanted to mix it up in this traditional space, and the windows were a great opportunity to make it fun and young and not so stuffy,” says Frantz. A black Art Deco hutch and flame-stitch rug offset the heavy mahogany table and chairs. “The furniture is more predictable, but what we surrounded it with brings it to a different place,” says Marks. “We are both open to trying unexpected things and moving things around—a lot of that comes from our background,” says Frantz. “A thing you don’t expect can become a special thing.”

It’s those special moments and clever mixing of styles that strikes a perfect balance between effortless and chic in Marks & Frantz’ interiors. “Because of our work with character development and brand development both in print and television,” says Marks, “we’ve gotten adept to taking words people use to describe what they want to express in their homes and bringing those ideas into reality. We often use combinations people don’t necessarily think would work together—that’s where beauty comes in and personality starts.”

A version of this article appeared in the September 2015 issue of Connecticut Cottages & Gardens with the headline: True to Character.