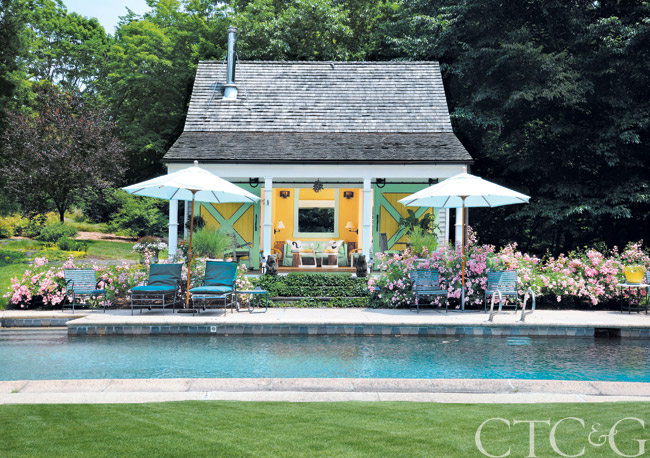 When Pat Miller and her husband, Livingston, moved to their 1830s home in Greenwich 25 years ago, the property was so overgrown they could barely get to the front door, much less the swimming pool out back.

“It was nothing but trees and vines and bushes,” says the landscape designer. “It was crazy.” But where some people might have seen a hopeless cause, Miller saw opportunity. “I love to take old landscapes and re-create them,” she says. “I love to move things around.” 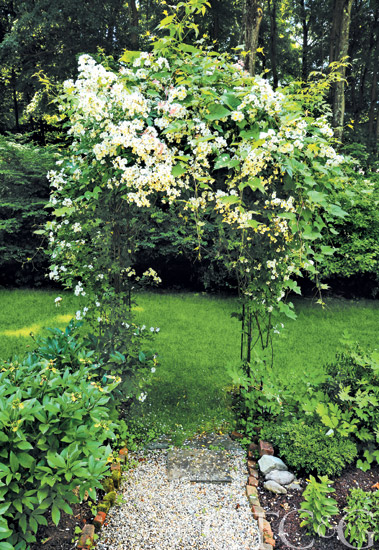 The first order of business was removing the foundation plantings in front—peonies, bird’s nest spruce, Hinoki cypress and azaleas—and setting them aside for later use. “I knew they could provide anchors for my new plant spaces,” she says. “They also had a couple years of growth, which added to their scale.” She created the much-needed walkway to the door and redesigned the driveway. “The circular pattern embraces the landscape,” notes Miller. “It says, ‘Hey, welcome everybody.’”

Then she turned her attention to the backyard, where years of neglect, compounded with the hilly topography and an underlying ledge, presented a challenge. “The goal was to create circulation and enable people to get to the pool at the top of the hill,” she says.

To achieve her vision, Miller let the landscape—and her family—determine which section came first. “I watched how my kids used the property,” she says. “They immediately found a way to clamber straight up the middle.” It’s the same approach she takes with new clients, especially those with young children. “People’s lives are so crazy. I help them create these garden rooms that are purposeful and they can enjoy.” 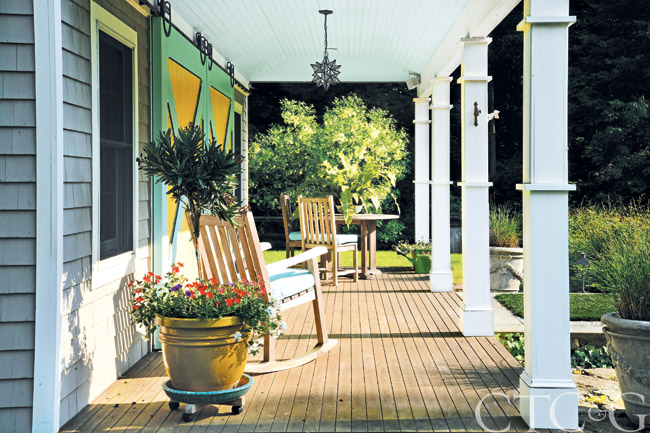 Following the natural contours of the land, Miller’s gardens terrace up the hill and flow seamlessly from one to the next, with small retaining walls providing form and shape. Over the years she has pushed the boundaries of the property, creating more lawn, taking out shade trees, and installing mixed-shrub borders. A large stone patio runs the length of the house, and an herb garden is within easy reach of the kitchen door. Stone statues, whimsical garden accessories and bird feeders are tucked throughout. As for the small Hinoki cypress that used to flank the front door? It’s now a soaring 20-feet-high focal point of the middle garden.

The designer loves color, the bolder the better. Come summer, the yard is a symphony of textures and tones: deutzia and Korean boxwood, azaleas and lavender, day lilies and lilac, ivy and fairy roses. “I think a garden should speak to you,” says Miller. “It should be like having a conversation.” Indeed, in the morning breeze a crabapple festooned with wind chimes plays an enchanting melody. 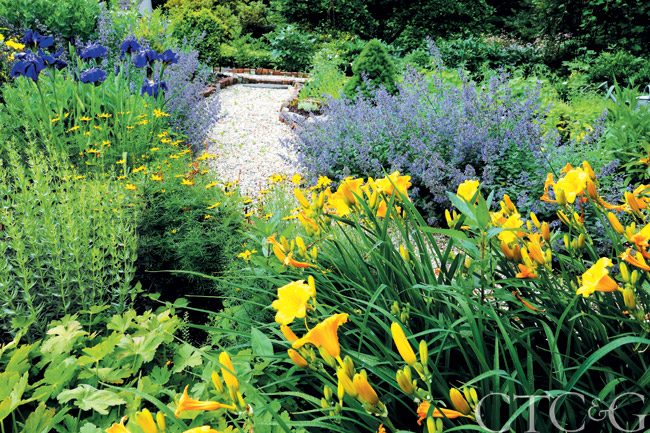 For Miller, the garden has long been a work in progress, evolving organically over time. Early on she surpassed her original goal: Where once there was no way up to the pool, now there are three. One runs up the middle; another curves out to the right and leads past stately peonies and a grapevine-and-rose covered pergola, another edges a shade garden where a weeping cherry provides the perfect canopy for ostrich fern, astilbe and woodland hyacinths.

About 10 years ago, after creating a rock garden at the top of the property, she built a proper pool house; its blue and yellow interiors have a cheerful beachy vibe. From the deck there is a view back to the house; a wood stove provides warmth on chilly fall evenings. “We spend a lot of time up here,” she says. “The fun thing is to watch it all change as the seasons go,” Miller says, pointing out a star magnolia, a Carlesii viburnum, a Rose of Sharon and—one of her favorites—a grand old dogwood, whose white blooms herald the spring. “I’d forgotten how beautiful it is,” she says, pausing to soak in the view. “It’s a lot of work, but every year at this time, I say, ‘wow, this is fabulous.’”

A version of this article appeared in the May 2014 issue of Connecticut Cottages & Gardens with the headline: Small Wonder.