Isabelle Kellogg, Photographs Courtesy of the Museum of the Confederacy, 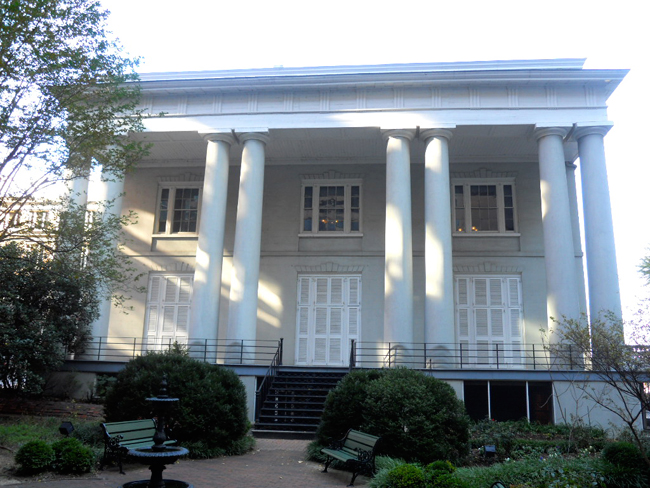 As the biopic Lincoln hits movie theaters this month, the spotlight is on Richmond, the city that has always been recognized for its rich architectural and interior-design history. Even before the Civil War and Abe Lincoln’s famous visit to Richmond, the White House of the Confederacy has remained one of the South’s most incredibly accurate examples of High Victorian interior design.

This residence, where Confederate president Jefferson Davis lived before the collapse of his Southern empire in 1865, was built in 1818 by Robert Mills in the white neoclassic style (commonly known as classic Greek revival) for John Brockenbrough, the president of the Bank of Virginia. The mansion stands only a few blocks from the Virginia State Capital, which was designed by Thomas Jefferson.

The mansion was sold to the City of Richmond in the mid 1850s, and then it was rented out to Confederate president Jefferson Davis and his family beginning in 1861, which was at the height of High Victorian design. In fact, the majority of the furniture is original and dates back to the late 19th century. The house is a National Historic Landmark and has been painstakingly returned to the elegance of its bygone day and thus serves as an excellent example of period homes of this style.

On a recent guided tour of the property, director Waite Rawls had plenty to discuss about the residence's history and its design features. (Before taking this position, Mr. Rawls worked in the commercial banking industry in New York, and he still has a country house in Cornwall Bridge, CT.) Citing the high Victorian aspects of the décor, we learned that “faux” anything was in vogue back then. Materials used throughout the mansion were made to replicate everything from bronze to wood. For example, inside the rotunda-shaped foyer, the wall covering looks like marble, but it's not. It's designed to look like marble, and very convincingly. Look up at the chandelier. It's a gasolier, a hanging lighting fixture that uses kerosene. There are many of these throughout the house. The two life-size "bronze" sculptures in the rotunda are made of plaster but painted to look like bronze. And the floor isn't made of tiles; it's covered in canvas, painted to look like tiles. 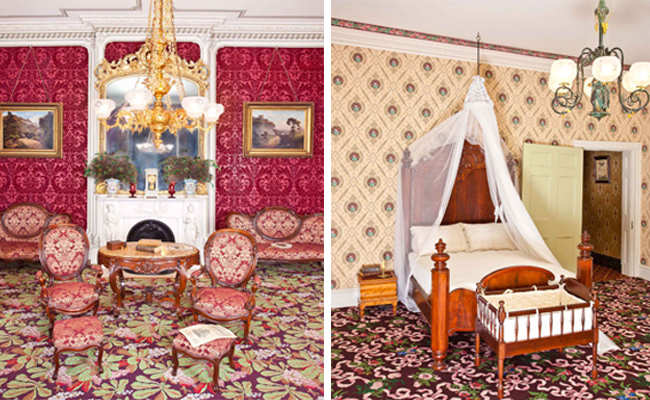 On the main floor, where the parlor room (the main living room or salon) connects to the music room and the dining room, there are high windows framed by richly brocaded curtains with heavy tassel decorations. The overall color scheme is deep red and dark green. Furniture, from chairs to sideboards and tables, is dark. Wall-to-wall carpeting is rendered with floral designs rich with reds, blues and greens, all reproductions of the original carpeting. The wallpaper even has crown molding all around the ceilings. Fireplaces are actually iron that has been painted to resemble marble, and the one in the first floor library, coyly called "the snuggery", is expertly painted. The techniques that craftsmen and artisans used to create design elements to fool the eye were really remarkable, which makes this house all the more interesting. A visitor to the property can't help but be amazed at, and inspired by, the range of "faux" design accents that were used back in that era.