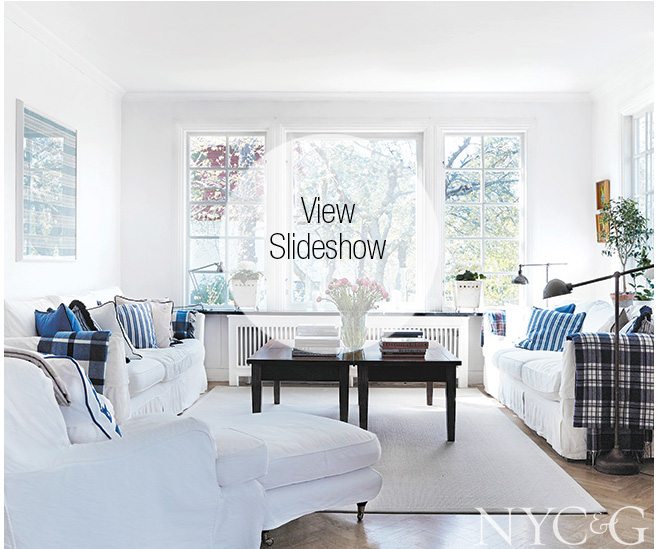 A telling clue to the Swedish mindset is the popular word lagom, which roughly translates to “everything in moderation,” meaning anything flashy or boastful doesn’t fly. Most Swedes would be appalled not only at the American McMansion, but even at the very notion of ensuite bedrooms and baths. For Kristina and Tommy Lindhe, the owners of the home accessories and fashion firm Lexington Company, their house in Bromma, an attractive suburb of Stockholm, might be modest in size, but it’s vastly rich in family history and importance. The home has been an oasis for the Lindhes and their three children (now in their 20s) since 1994.

Founded in 1997, Lexington Company has shops in 20 markets in Europe, China, Taiwan, and the U.S., including flagship stores in East Hampton, Southampton, and Greenwich, Connecticut. Under the careful nurturing of Kristina (founder, CEO, and creative director) and Tommy (COO), the company sells its products via 900 retailers and 55 flagship/concept stores globally. “We launched Lexington to fill a gap we saw in the market,” Kristina says. “We loved the New England lifestyle, and no one was doing that in interiors—and it didn’t even exist in Europe. We also wanted to create an international brand with a style that would work in different regions.”

With its small forests, parks, lakes, and 15-minute proximity to central Stockholm and Lexington’s headquarters, Bromma is bucolic, but by no means a backwater. The family’s 1929 house measures less than 1,500 square feet, though it’s considered large by local standards. “It’s a big house for Sweden,” Kristina says, “but we bought it because it had four bedrooms all on the same level, which is uncommon.” At the time of purchase, however, “it was in bad condition. I told my husband, ‘I don’t want to live more than three months with this kitchen!’ But seven years went by before we renovated it, because we founded our company during this period. There was so much work, and no time to do anything. And because I’m so interested in interior decoration, there was no way I wanted someone else to do it. Swedish people know themselves well, and what they like. And they also enjoy being hands-on—putting effort into choosing the curtains and floors.”

When Kristina did find the time, she began with a white palette, important not only for simplicity, but also to brighten the cloudy days and extended darkness of the Nordic winter. Lagom also has its place here. “I don’t like to have too many things,” she says. “Every item is carefully selected. After a long day at work, you need to have a clean environment when you come home.” The family did make a concession of sorts, though, to the nationally treasured Dala horse, a brightly painted, hand-carved horse that morphed during 150 years from a children’s toy to a form of barter for household goods to a symbol of Swedish folklore. “When we painted the exterior of the house, we referenced the deep blue of the horse.”

Among the furnishings are pieces made by Kristina’s father and grandfather, who operated a small factory that produced classic Swedish furniture, such as the 1920s wood and glass-front hutch in the dining room. “I really like combining new pieces with older ones,” she says. “It gives everything a personal touch.” A case in point is an antique piece of denim she found in a Paris flea market, now framed and hanging as a piece of art. “I love to collect fabrics. I have a small room at the top of the house that’s filled with them. My husband thinks I’m crazy, but they’re wonderful to touch.”

The heart of the home is the kitchen, where the family gathers for meals on a made-to-order slate-top table. For the busy Lindhes, it is also command central (a chalkboard denotes all family assignments and travel schedules). Tommy is the family gourmand, while Kristina admits to being “a really bad cook, though I love to do the table settings. I can plan them for weeks. I like to work with various themes, colors, and flowers. I even designed a chandelier that I can decorate with different plants, depending on the season. It’s very Scandinavian to do everything yourself, whereas Americans often hire other people to do the work. Ultimately, I think we need a bit of both—each culture can learn a lot from the other.”