Earth-mother winemakers nurture the vine and the wine

Biodynamic winemaking is wildly misunderstood. To the outsider
it seems like voodoo viticulture, a cult of hippie winemakers who refuse to grow up. There’s a “prophet,” Rudolf Steiner, whose lectures in the 1920s on anthroposophy, holistic farming and spiritual practices are the guiding principles. And when you meet biodynamic winemakers, they speak of supernatural terrestrial and cosmic forces. It sounds like a whole lot of mumbo jumbo. And yet, plenty of otherwise reasonable people have signed on completely. I’ve tasted their wine. I am a believer.

Some of the world’s most coveted bottles, in fact, are biodynamic, including the entire production of Domaine de la Romanée-Conti (which fetch insane prices at auction). You can taste the “life force” in these wines.

The methods used to produce them arouse controversy even within the wine business itself. Going beyond being simply organic requires a huge leap of faith. Biodynamic grape growers must make special preparations—stuffing manure or crushed quartz into cow’s horns and burying the package in the soil for the winter, thus giving the vines “animal energy.” They must tap into spiritual energies, planting and harvesting according to the phases of the moon and the planets. It’s all pretty odd, but the results often speak for themselves. 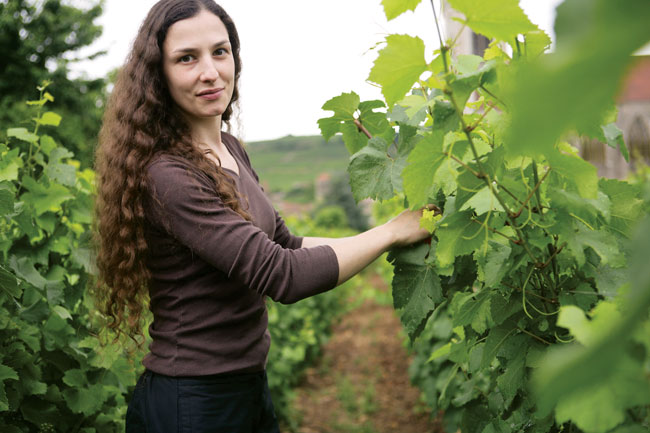 If Nicolas Joly (whose Clos de La Coulée de Serrant from the Loire is highly prized by collectors) is the pioneering male voice of the movement, Anne Claude Leflaive is its queen bee. Her Domaine Leflaive makes arguably the best white wine in Burgundy, a legendary Puligny-Montrachet that is entirely biodynamic. I am awestruck by its vivid, almost living, flavors.

Leflaive has inspired a whole group of female disciples. One of the most notable is her cousin by marriage, Alexandra Marnier-Lapostolle of Casa Lapostolle in Chile, who grew grapes by the cycles of the sun, moon and stars before turning 100 percent biodynamic. When she hired noted architect Roberto Benavente to design her second winery, at her Clos Apalta property, he followed patterns said to optimize biodynamic energies—creating an elliptical structure based on Michelangelo’s Piazza del Campidoglio in Rome.

Marnier-Lapostolle has worked to increase the biodiversity of her 700 acres of vineyard by planting native Chilean vegetation around it. In 2008, her top cuvée, Clos Apalta, was chosen as the number-one wine in the world on Wine Spectator’s annual list of 100.

Creating biodiversity is an essential component of turning vineyards fully biodynamic. When I traveled in the South of France recently, I met another convert, winemaker Marie Chauffray, of La Reserve d’O, whose high altitude vineyards—surrounded by garrigue (shrubby bush land)—is essentially a nature preserve crawling with all sorts of lizards and snakes. She even planted blackberry bushes and thyme among the vines. Her red blends (made from syrah and grenache) tasted of the wild herbal flavors of her particular terroir.

More recently, I had lunch in New York with Audrey Braccini of Domaine Ferret in southern Burgundy. At 32, she is the third woman to run this historic winery since its founding in the mid 19th century. With Leflaive as her role model, she brought biodynamic practices to Domaine Ferret’s 41 acres.

Over lunch Braccini laid out the biodynamic philosophy as she sees it. “Bio means respect of the environment, the equilibrium of nature and the total rejection of chemical products,” she said. “Dynamic means taking into account all the vibrating energies of the earth and planets as cosmic elements and the equilibrium between the four elements of the universe: earth, water, air and fire. The discipline is highly intuitive.”

I tasted her lovely perfumed Pouilly-Fuisse—rarely have I experienced such expressiveness in a chardonnay—and asked her how she had created this remarkable wine. She corrected my term “created,” explaining that she had merely “helped” nature make the wine. Like Nicolas Joly, she rejects the term “winemaker,” preferring to use “nature assistant” instead. We talked about the cosmic vibrations in her wine and the strong relationship that develops between the winegrower and the vine.

As we said our adieus, I noticed her long wavy hair, a mane stretching down the length of her back. Her hair was so alive and shiny that it seemed almost to have a life force of its own. I couldn’t help but think that she must have grown it biodynamically.