Life in the Fast Lane 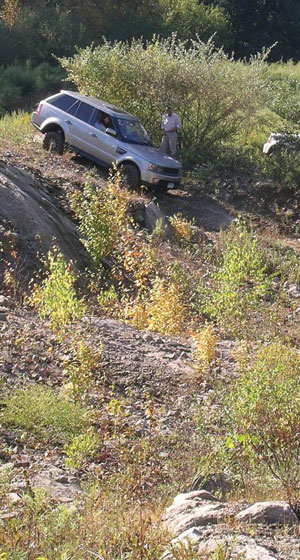 "It is simply the most extraordinary vehicle in the world." As a veteran of (I kid you not!) over 20 Range Rovers since the US introduction in 1987, my ears pricked up as Ryan Ambrifi, Centre Manager, Land Rover of Milford, addressed the group assembled in Connecticut last fall. It wasn’t so much the words as the level of passion in his voice that intrigued me, and today would prove or disprove his statement.

Megan, my 21-year-old grandniece, here on a scholarship from England, and I were part of a group of Land Rover owners about to embark on an off-road event designed to put the drivers and the cars to the test.

Fred Monsees, driving instructor for Land Rover North America, recounted two common mistakes drivers make—not paying attention and driving too fast. “Just remember, the right side of the car costs as much as the left side,” he said, as he explained the psychology of right-hand bias. “We have a tendency to steer away from things we can see, so the right side of the car typically gets more damage. And the gas pedal isn’t an on/off switch—keep it steady.”

Next, we were given instructions on the car’s controls that the majority of Fairfield County owners never touch, moving the car from high-range to low-range and dialing up course conditions. It’s not that difficult as the car has helpful pictures of snowflakes, hills and slippery surfaces.

Naturally, avoiding damage to our high-priced cars was emphasized. “The terrain doesn’t damage vehicles, people do,” Monsees insisted. “In hostile terrain, it’s up to the operator to understand how the car works.” He then pointed to the hostile terrain that had been created for our exercise.

The first part of the course—how to avoid trees and obstacles—was a low-range warm-up to give us a feel for the car. Okay, no big deal. Approaching the Hill Eye Opener and feeling a trifle confident, I was startled to hear Megan scream and saw her point to the near-vertical descent ahead. Grace under pressure is my motto, and there was no need to escalate the terror level in the car (I would never hear the end of it from the Howatson clan in Scotland if anything happened to Megan). I reminded myself that I grew up on a stick shift and the correct gear would see us through. Monsees’ calm voice through the window cautioned to put the vehicle into first gear, go slow, keep it steady, wheels left, trust the car…and we were down. Exhilaration!

The third section was a deliberately contrived hellhole of ruts, holes and ditches. Here, I finally understood the value of the car I had lived with for a lifetime. Like a skier whose body stays level to the surface as her knees absorb the terrain, the vehicle’s four-wheel independent suspension is controlled by air springs, allowing each individual tire to conform to the terrain and gain more traction.

Coming off a left-side tilt, immediately tipping to the right, both of us screaming, I heaved my body left and heard Monsees drawl, “By the way, leaning the body makes absolutely no difference to what the car is going to do.” Okay, but it feels better.

According to the techies at Land Rover, our Range Rover Sport has an “active rear-locking differential, which senses any loss of traction from the wheels and compensates by automatically locking the differential to maintain momentum.” That’s how we managed to move forward on two wheels, and confirmed that this just may be the most extraordinary vehicle in the world!