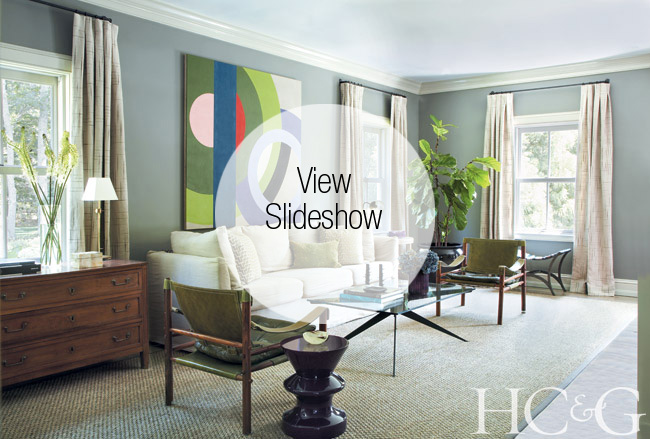 Nathan Orsman describes his first house in the Hamptons as a “typical East End beach shack in Noyac,” although his husband, Jose Castro, remembers it a bit differently. “It was such a wreck when we bought it that I cried,” he recalls. “But it turned out to be the cutest cottage ever.”

When the place began to feel too small, the men went looking for a home with an ample yard for their schnoodle, Cooper, and room for a pool. What they found, at the intersection of two shady country roads in Water Mill, was a house that looks like a renovated Colonial saltbox from the street. In fact, it dates from 2005, and while it’s not an especially large 2,600 square feet, the grounds are substantial.

“It only has two bedrooms, but it’s quite spacious and very well built,” says Orsman, a lighting designer who has worked with top-tier decorators and architects on projects all over the Northeast, California, Florida, and the Caribbean. “We didn’t like some of the Victorian country details, but they were easy enough to change.”

To help with the makeover, Orsman and Castro called on their friend and colleague David Scott, a Manhattan-based decorator. In order to accommodate lighting and make the rooms airier, they raised the ceiling in the master bedroom to the roofline and added beams in the family room. “I wanted to rip up the floors, too,” adds Castro, a senior vice president at Nickelodeon. “They were so orange! But David convinced us that we could find a stain I would like. I think we tried 29 different stains before we got it right.”

In addition to working on “the floor plans, the color scheme, and the wall coverings,” Scott says, he also helped the couple “coordinate their art, existing furniture, and new pieces,” ranging from an Art Deco Charles Rennie Mackintosh chair to a capiz-shell ceiling fixture from West Elm. “It’s all about the high-low,” Castro says. “We wanted a house where people would be comfortable.” Part of Scott’s challenge was finding compromises that would satisfy both men, since they have somewhat different sensibilities. “Jose likes shine,” Scott says of the Miami-born Castro, while Orsman, a native of Australia, “is more of a matte-finish kind of guy.”

The property’s 1.3 acres provided plenty of room for a pool, although the grounds needed more work than the house. “It was originally two tax lots,” says Orsman, “and one of them had been completely neglected. It was a mess.” To create a versatile, relaxing landscape, they consulted with another frequent Orsman collaborator, landscape architect Mario Nievera, to come up with a master plan. The men ripped out the overgrowth, leveled the site, installed the long-desired pool, and converted a forlorn-looking ’50s cottage into a sweet guesthouse/pool house. Because they like to entertain often, they also put in an “outdoor lounge” that’s framed by a row of soaring cedars and lit by a handful of oversize canvas pendant lamps. “The canvas lanterns in the cedars were meant to be temporary,” says Orsman, ever the experimenter when it comes to lighting design. “But I like them so much that they’ve been up there for two years.”

A version of this article appeared in the September 2015 issue of Hamptons Cottages & Gardens with the headline: Chic & Sweet.