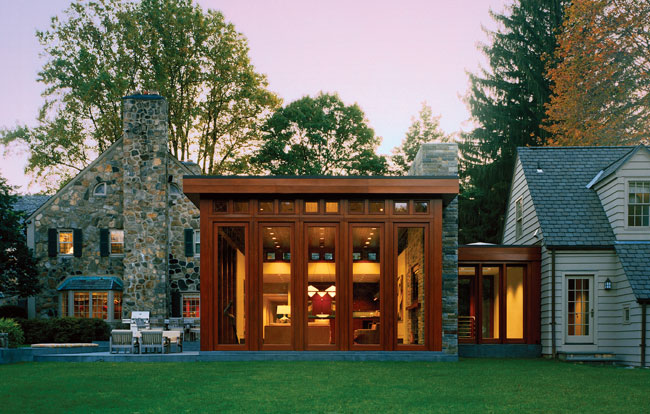 When Bob Wyckoff and Alicia Longobardo  first interviewed
New York–based architect Harry Elson to see if he might be a good fit to update their 1920s Connecticut farmhouse, the job hinged on one pivotal request. “I want something ‘wow’,” Elson recalls Wyckoff saying. Elson’s response? “I can do that.” 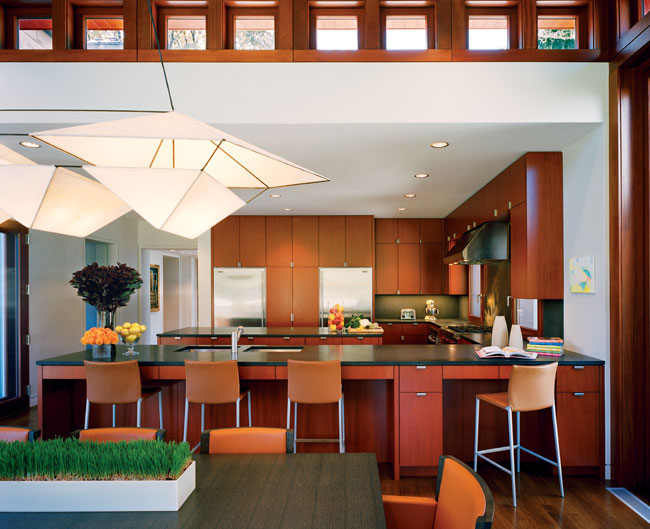 For Elson, “wow” meant mixing together Alicia’s memories of growing up in a modern house and Bob’s affinity for spaces that were warm and cozy. It meant updating the diagrammatic simplicity of the house’s neighboring modernist boxes—“beautiful,” Elson says, but perhaps too single-note in their expression of floor, transparent wall, and heavy floating ceiling—and coming up with a novel read on modernism. And it meant giving Bob and Alicia what they were missing: a 21st-century space.

To make room for that space, Elson filled in the gap between the existing house and the garage, linking one stone structure to another with an in-between box made of mahogany, glass, and sandblasted Pompeii stone. The addition not only invites a view to the landscape so essential to New Canaan modernism, but also evens out the upstairs/downstairs circulation that was keeping the house tight and confined. “You had this condition where you had to go up to go down,” Elson says, explaining the layout of tiny rooms with couplets of steps here and there. “The second thing is that the heights of the rooms were quite short.” That, combined with what he describes as a “pinwheel organization around a center entry,” meant that Bob and Alicia were really missing a sense of soaring grandeur. 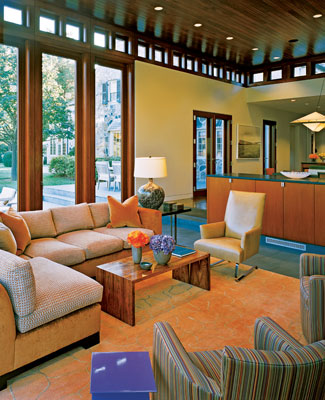 The solution was in a new, light-filled kitchen and living area, one that came with a punch. “We wanted to create an element of surprise, and an element of procession.” The surprise came from keeping the façade of the house, visible from the street, exactly as it had been before. The sense of procession came from Elson’s creation of what he calls “two dynamic axes,” one linking the living room to the library, the other linking the old part of the house to the new. “You go from the more compact traditional scale of the existing house into the addition, which is more about the materials.” To combat the short ceiling heights, Elson created a telescoping effect at the addition’s entry: “As you go two steps down into the living space, the ceiling also goes up.” The effect is not only experientially powerful, but also conceptually so: a physical telescoping that mirrors the modern movement’s opening up of the house out onto the landscape.

Floor-to-ceiling windows line most façades of the addition, but it is a clerestory of little boxy windows that provides a datum going all the way around, and a sense of scale. “It became a device for us to pull together all the different elements that we were playing with,” Elson explains. “It was almost a Rubik’s cube approach.” Wow.

This article appears in the March 2011 issue of CTC&G (Connecticut Cottages & Gardens).