Living in the Round

A Yale architect with a love for industrial dwellings breathes new life into an abandoned water tank. See exclusive images. 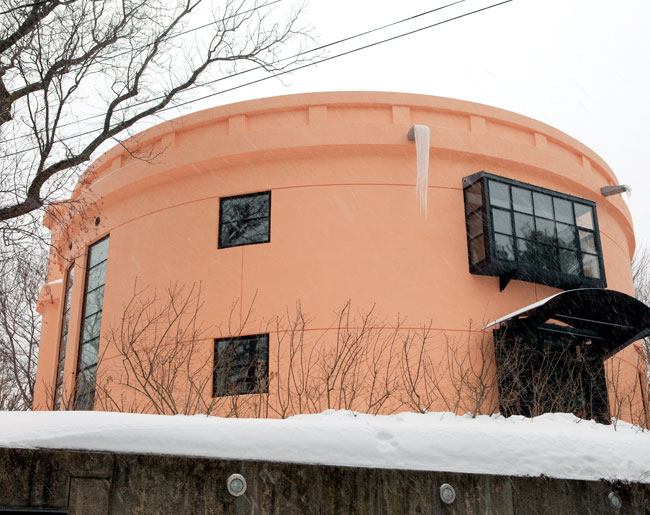 Sixteen years ago when the opportunity arose to purchase a cistern perched on a hillside just outside of New Haven with views of Long Island Sound and the Gothic spires of Yale, architect Peter de Bretteville didn’t hesitate. “There’s something extraordinary about industrial buildings like warehouses, mills and water tanks. They are bigger than life—taller, wider and more robust—than normal residential buildings,” says de Bretteville. “And there’s something so appealing about living in an old relic.”

Located in a neighborhood that, according to the architect, resembles the Adirondacks, de Bretteville met no opposition to his plan for residing in the deteriorating concrete eyesore built in 1907. “People were really happy that someone was going to renovate it,” he says. In addition to the perfect locale, elements like the four concrete columns supporting the roof and the generous dimensions (28-feet high with a 50-foot diameter) made it ideal for reuse as a dwelling. “It was ready to be inhabited,” says de Bretteville, who insulated the 18-inch-thick concrete walls on the outside to maximize the thermal mass and increase overall energy efficiency. 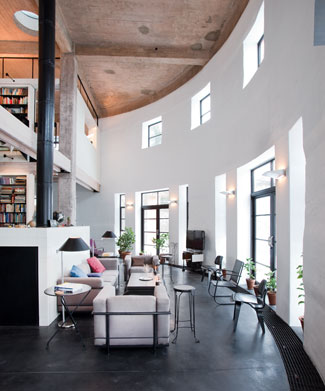 From the beginning, the architect, whose firm is actively involved in historic preservation and adaptive reuse work, saw himself as “the interpreter of the space.” “The building just told me where things should go,” says de Bretteville, who once worked in the Milan office of architect Giancarlo De Carlo. Keeping the existing street approach, he added a gracious staircase in the same proportions as the Palazzo Ducale, the renowned Renaissance building in Urbino, Italy. The concrete steps ascend nine feet to a 100-square-foot level area where the 3,200-square-foot water tank resides.

Once inside, the obvious placement for the living room was on the south where it opens to city views and a porch shaded by a stretched canvas roof. Meanwhile, the kitchen just begged for an eastern orientation, so that the architect and his wife could eat breakfast in the morning sun. And, instead of “a dining room you never use,” a two-story library defined by the original four columns and lit by four circular skylights just naturally emerged as the home’s centerpiece.

A perfectly scaled steel staircase provides access to the second floor, where a glass balcony (“our most exotic element,” he says) leads to the master suite, which enjoys the same spacious 16 x 16 proportions as the library. Thanks to a bay window and a band of 30-inch-high clerestory glass, the sleeping quarters enjoy natural light from all four sides.

Throughout the house, materials in keeping with an industrial palette were selected. Integral colored concrete floors sealed with wax tie the ground-level spaces together, and black-painted steel brackets and railings contain the glass walkway above. Factory-grade tongue-and-groove Southern pine forms the ground-level ceiling which, in a nod to the underside of New England porches, is painted blue. The upper-level floor sports an ebony stain.

Many of the furnishings—including the upholstered living room sofa and coffee table fashioned from column capitals—are from the owner’s former Los Angeles residence, an ahead-of-its-time loft-style structure he built in the 1970s. “Even then I was really interested in rough-and-tumble steel industrial buildings,” he says. Rounding out the seating is a collection of what de Bretteville labels “un-pedigreed” modern or industrial chairs, including French café stools and aluminum submarine chairs. 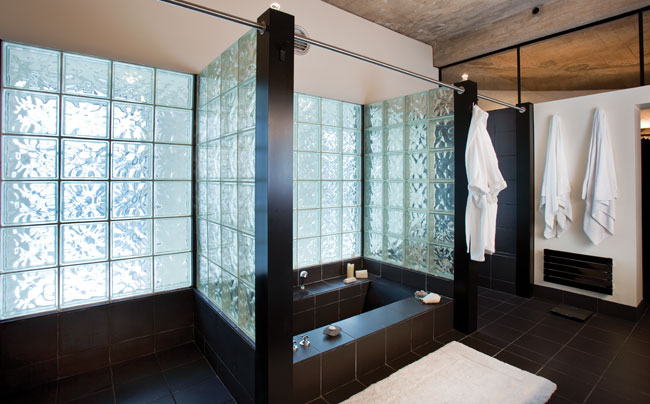 With a neutral color scheme on the interiors, there was never any question the walls would be various shades of pale, ranging from creamy tones to bright refrigerator white. But deciding what to paint over the dreary gray on the exterior was not so easy. For that the architect turned to his Italian leanings and three jars of pigment he purchased in Venice on a family vacation. “The colors were characteristic of the palazzos there,” he says about the creamy off-white, intense Pompeian red, and mustard yellow hues.

After settling on the yellow for being the most reminiscent of Italy, he determined it looked too dirty in the Connecticut light. A fair amount of red was added, and the peachy tone that emerged glows softly year round. “In conservative New England, I was a little concerned about how the neighbors would feel, but they love it,” says de Bretteville. “And even on a terrible, drizzly, gray day, the color holds up.”