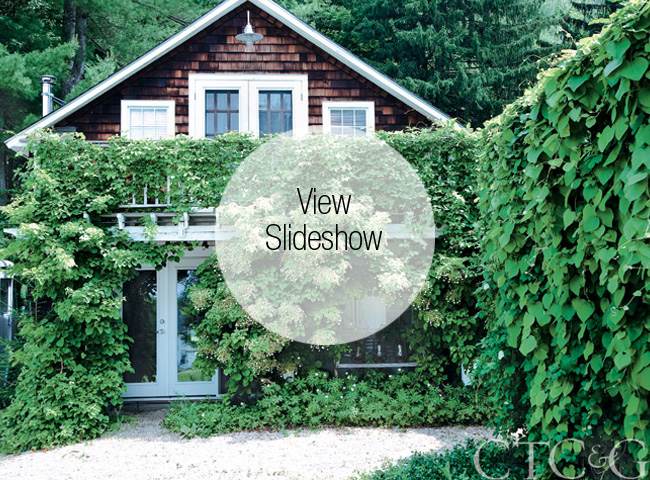 In the real estate market, square footage reigns supreme. But is it true that bigger is always better?

Not necessarily, according to architectural designer Ritch Holben of RH Designs. “At a certain point, more space is just more space,” he notes. “Working within the constraints of a small space is much more motivating to me.” You don’t have to look beyond his own home to see his point.

Some 20 years ago, Holben and his partner, Ken De Loreto, bought a small 19th-century house in a classic single-street town in the Berkshires at the border of Connecticut. The property consists of a main house, approximately 1,600 square feet, and across the lawn, a carriage house, approximately 1,400 square feet, which functions as an office, guesthouse and additional living space for the couple, who split their time between the Berkshires and Miami. In a land full of McMansions, the carriage house proves that heaps of square footage isn’t necessary to make a grand gesture.

The house needed a long overdue update when they bought it. “It had been done in a very 1970s manner—and not in a good way,” says De Loreto. “Lots of dark cabinetry in the kitchen, Pennsylvania Dutch wallpaper, fiberglass. It was about stripping it down little by little and figuring out how to respect the integrity of the space.” When a freak windstorm brought a tree down on top of the house, the couple saw it as opportunity to really shape it into a highly functional live/work space while using the same roof- and footprint of the original structure.

Inside is a surprising mash-up between old and new, as if Colonial chic crossbred with a super modern sensibility. It’s a collected space that flows seamlessly and takes advantage of every square inch. “This is a merge of our styles,” says Holben.  The key is to respect what you bought and inject a new energy into it.”

On the first floor, the outdated L-shaped kitchen was given a streamlined and tailored update. “We thought of it more as an Airstream trailer,” says De Loreto. “How do we make it sharper, lighter and more functional?” They replaced existing cabinetry with stainless steel and installed a slim, stainless Swedish fridge. Above the counter, white glass mosaic tiles fade into chrome ones. A three-inch-deep shelf holds everyday cups and spices; glass-faced upper cabinets flip up instead of out. “All wood sucks the life out of everything,” explains Holben. “Reflective spaces open it up and give it life. There’s nothing extraneous here. If anything is left out, it’s because it is beautiful and functional.”

Silver pinstriping that echoes the sterling of the kitchen threads through the original pine wood floors. A sleek light fixture hangs over an antique table. “I love the contrast of an old structure with shinier elements. It’s a respect for what’s old without trying to mimic it completely,” says Holben.

Upstairs, in the former hayloft, the floor was closed up and dormers were added to make it usable as a bedroom. A living area also functions as an office. “We carved out three distinct spaces in a 14-by-26-foot space,” says Holben. “We had to think about how it was going to give us the greatest flexibility in the future. We maximized a tiny envelope to make it as functional as possible. ” The furnishings are pieces Holben has collected over the years. The mix—like the Corbusier chaise and bold graphic rug—feels perfectly at home in the historic structure. “We’ve brought modern stuff in, but there is something grounding about it,” says Holben. “There’s something so beautiful about the human scale of a small space. You feel at home.

A version of this article appeared in the March 2015 issue of Connecticut Cottages & Gardens with the headline: Small Wonder.