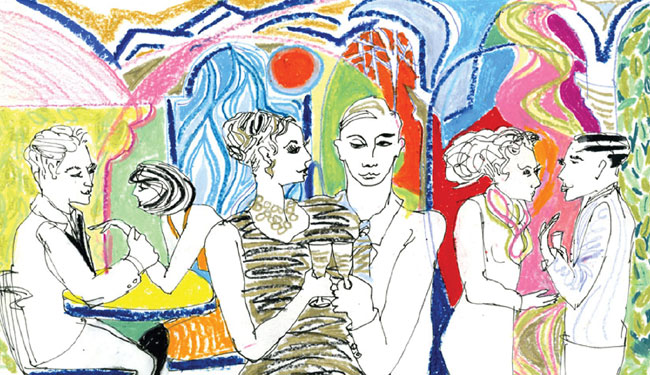 Champagne is my greatest passion, the fuel for my most incendiary nights. I love the Grandes Marques of course—the Veuve Clicquots and Dom Perignons—but also have a soft spot for much smaller producers. Ruth Frantz of Southport shares my affinity for these boutique Champagnes. Just months ago, she began a business importing some of the best of the little-known bubbly. As she popped the cork on a Larmandier-Bernier blanc de blanc, extra brut, we sat down to discuss our favorite drink.

“Champagne is so misunderstood,” said Frantz. “Can you believe that many people don’t even know that Champagne is a wine? And why do some drink it only for celebrations? Or serve it only as an aperitif when it really goes so well with dinner?” She was preaching to the choir, of course, but I nodded in encouragement.

“When people entertain, they’ll spend a fortune on a beef fillet and fancy cheeses and then skimp on wine,” she said. “Serve rosé Champagne with poached salmon and you take the party to a whole new level.” Frantz has made it her mission to spread the word about small-grower Champagnes, which come in a bewildering array of aromas, flavors and textures. Some are floral, others fruity, others still, rich and intense. They can be spicy or toasty or mineral-driven. Out of some 4,000 Champagne brands, however, fewer than 200 ever make it into the American market.

While the big labels blend grapes from scores of different vineyards, small growers produce sparkling wines that reflect the terroir of their particular site. “Boutique Champagnes are more like Burgundies,” explained Frantz. “They’re so expressive of the vineyard and micro-climate in which they’re grown.”

Frantz had been exploring plans for her second act in life—she spent decades in the corporate world at Clairol, Diageo and Pernod Ricard—when she began noticing small-grower Champagnes on top restaurant wine lists. “These handcrafted Champagnes,” she said, “have a point of view to match the bespoke cuisine in these restaurants.” And just like that she thought of making niche bubbly her business.

She began by studying the country’s best wine lists, at places like Gramercy Tavern in New York and the French Laundry in Napa. It wasn’t long before she was traveling to France to negotiate directly with producers, lining up deals to sell through her online shop, henrisreserve.com, named for a fictional French Champagne fanatic.

Playing along with the fantasy, I asked her to tell me what Henri would drink. “Henri drinks only the most refined,” she joked. “He likes Billiot Rosé, a fabulous grand cru, and Gimonnet, the quintessential blanc de blanc. He also loves Fleury, made from pinot noir from a biodynamic vineyard. When he’s at George V in Paris, he’ll sip the minerally Diebolt-Vallois or at Noma in Copenhagen, he’ll order Vilmart & Cie from an organic property going back five generations.”

On her website, Frantz offers special editions in beautiful packaging, including Jean Milan’s 1864 edition and Jacquesson’s 734, as well as the Henri Tasting Sampler, which includes three bottles with tasting notes. She’s started a Bon Vivant Club, sending members two grand crus every other month. Henri’s Reserve also has a Ph.D. page that educates on the grand cru villages.

As Frantz refilled my glass of low sugar-dosage (for the calorie conscious) Larmandier-Bernier, we talked size: “splits [two flutes per bottle] for afternoon assignations and magnums to make the bigger impression.” Indeed she and her alter ego, Henri, are full of creative plans. They’ll come chez vous to orchestrate boutique bubbly tasting parties or to design your Champagne cellar. I wondered if Henri might pay house calls and fill my bathtub, Marilyn-Monroe style, with special small-grower bubbly. “Bien sur,” said the Champagne lady. “Anything is possible.”