Look Inside a Light Filled Cottage in Sag Harbor 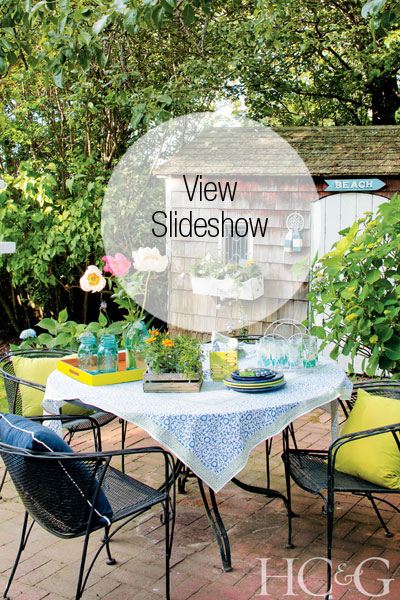 “It all started with Marilyn Monroe,” says Phyllis Landi, explaining how she arrived at a decorating scheme for her 750-square-foot Sag Harbor cottage. The all-white walls and pale neutral furnishings that give the tiny 1908 waterfront dwelling its airy serenity were inspired by an ethereal, poster-size image of the movie goddess that now hangs in Landi’s living room. Taken by the legendary Bert Stern, a fellow Sag Harbor resident, the photo has been in Landi’s hands for more than three decades.

“That photograph was given to me by an art director I worked with in the ’70s,” recalls Landi, a freelance TV producer who once hired Stern to shoot a commercial for Coca-Cola featuring Ray Charles. “It had been in my New York apartment for years, and when I bought this house, in 1983, I brought it out here first thing. The decor evolved from there.”

At the time, there was dark wood paneling throughout and a wall that cut off the living room from the sparkling view of Upper Sag Harbor Cove. “It was a bit of a cave, a dark little cottage screaming to be light and bright and happy.”

To that end, Landi, who spent weekends at the house for many years and now lives there full time, whitewashed the walls and floors, tore down the offending partition, opened up the dining room to the deck with new French doors, and added skylights and new windows in the kitchen. Her carefully edited collection of vintage 1940’s furniture, which includes a Heywood- Wakefield dining set, George Nelson sideboard and pretzel-shaped rattan sofa, emphasizes blond woods. In the main living space, she firmly resisted anything not in a creamy earth tone when it came to rugs, pillows and other accessories.“ Maybe it’s because I always wanted to be a blonde,” she jokes.

Landi bought the miniature house after having rented the place for a year to see if she liked the Sag Harbor life enough to buy. She did, and “fell in love with the spot,” but the cottage wasn’t on the market at the time. Another year later, it was, and she was still shopping around.“ The water view made the property seem endless, and the house was sweet and cozy,” she says. “I loved my neighbors; some of them grew up right here. I’m a hippie, and the community felt right.”

Like many vintage Sag Harbor houses, this one—probably a fisherman’s cottage initially, on a curving one-third acre at the edge of the historic district—has a quirky backstory. “It was left to two sisters in a will,” Landi says. “They were feuding, so the story goes, and split the house in half.” The other half was moved to a lot down the street and has since been demolished. The original kitchen went with it; Landi’s kitchen was added in the 1940s. She kept it more or less as she found it, with the addition of wainscoting on the walls and ceiling, a third window over the sink and a glass-block window in a nook with a table and an L-shaped banquette. Here she breaks free of her all-neutral palette, displaying Fiestaware and other collectible kitchenware in beachy aqua and green.

The house’s front door opens into a stone-tiled, light-filled sunroom, which is where overnight guests sleep. A narrow wooden stair leads to a loft bedroom with a romantic dormer window and window seat looking out over the water. And that’s all the space Landi needs. “I lived in New York apartments all my life,” she says. “The size of this house has never been a problem.”

A version of this article appeared in the August 1 2011 issue of HC&G (Hamptons Cottages & Gardens) with the headline: Cottage on the Cove.