Lost and Found: Treasures of the Past 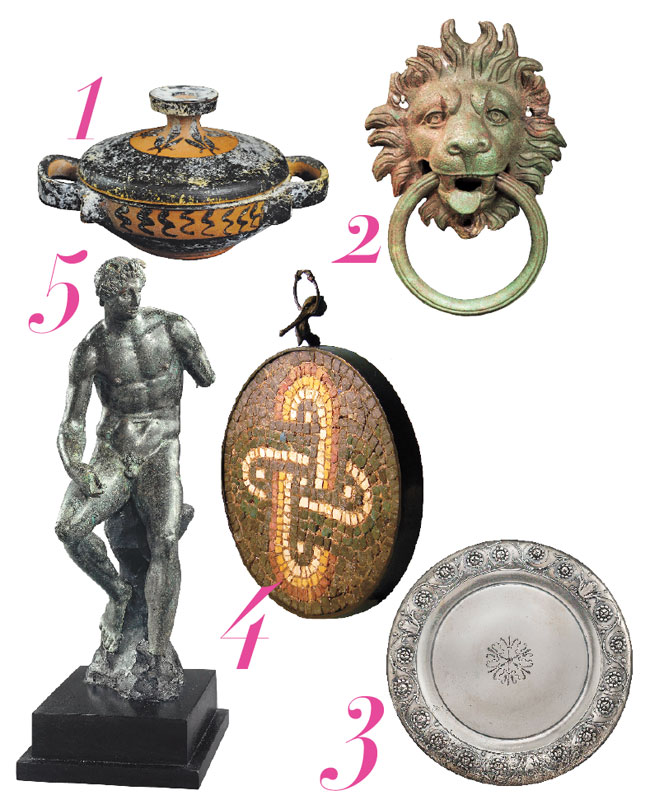 1 Makeup Artistry
Long before Elizabeth Arden and Estée Lauder hit the scene, ancient Greek women made their own cosmetics and stored them in a lekanis, a vessel often presented by a father to his daughter on her wedding day. This 6½"-diameter, circa 350–330 b.c. lidded ceramic lekanis was unearthed in Magna-Graecia, a region of coastal southern Italy that was home to many Greeks of the era. $2,150, Aphrodite Ancient Art, 1200 Fifth Ave., NYC, 212-987-9878.

2 Roaring Fire
When 2nd- to 3rd-century a.d. Romans wanted to carry a crate in high style, they typically would have affixed a dramatic bronze lion-motif handle such as this one. Modern-day interpretations might include its use as a door knocker or decorative wall plaque. $8,500, Royal-Athena Galleries, 153 E. 57th St., NYC, 212-355-2034.

3 Sterling Past
No worries about the china getting broken at your next Roman-style bacchanal: The rim of this 5"-diameter silver plate, which dates from the 1st century b.c., is embellished with a floral motif that echoes the etched center. $85,000, Merrin Gallery, 724 Fifth Ave., NYC, 212-757-2884.

4 Totally Floored
This decorative wall pendant (9¾" diam.) started out as part of a Roman mosaic floor in the 2nd to 3rd century a.d. Now encased in a contemporary bronze frame, the interlocking tiles are rendered in hues of ocher, yellow, white, and blue tesserae. $4,000, Hixenbaugh Ancient Art, NYC, 212-861-9743.

5 Special Delivery
Hermes, the messenger of the Olympian gods, appears to be taking a breather on a boulder (just don’t tell Zeus). The 10½"-high bronze statuette dates from the 4th century b.c. and may likely be the work of Lysippos, the early Hellenistic period’s master sculptor. $1.9 million, Phoenix Ancient Art, 47 E. 66th St., NYC, 212-288-7518.