At her home in the Hudson Valley, author and style arbiter Marian McEvoy proves that "crafting" is uncommonly chic. See the exclusive images. 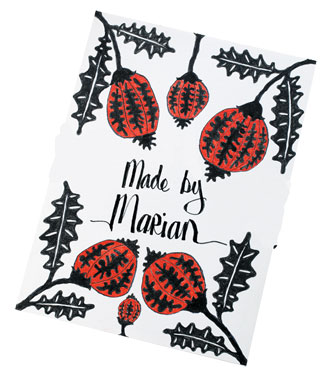 From the outside, Marian McEvoy’s colonial-era cottage in the Hudson Valley is a sweet, well-tended, white clapboard affair. But walk in the front door, and wham! Bursts of color and wildly varied textures distinguish every surface, and things both handmade and haute live in perfect harmony.

By any stretch of decorating logic, the mix shouldn’t work. But then, McEvoy is famous for mixing things up. A former fashion editor for Women’s Wear Daily in Paris, the L.A. native returned to the States in the ’90s to edit Elle Decor, spinning it into a stunning success before moving on to jump-start the then-staid House Beautiful. After relocating to the Hudson Valley, she became a contributing editor to Domino and has just completed a forthcoming book on the groundbreaking ’70s-era decorator Bill Willis.

“Marian is one of those great fashion minds who understand proportion, harmony, invention, and delight, and that’s what she brought to shelter magazines,” says Joan Juliet Buck, a former editor of French Vogue who has known McEvoy since their cub-reporter days. “She’s just an awesome talent.”

"If you’re going to paint a room gray, why not just lock
yourself up and do yourself in?"

Indeed, McEvoy’s mark on the shelter world has been so indelible that editors and designers often talk about her in revered, respectful tones, even though she’s down to earth, friendly, and extremely funny in person. “I’ve never met a color I didn’t like,” she says, surveying her ruby-hued living room, “except for maybe gray. If you’re going to paint a room gray, why not just lock yourself up and do yourself in?” 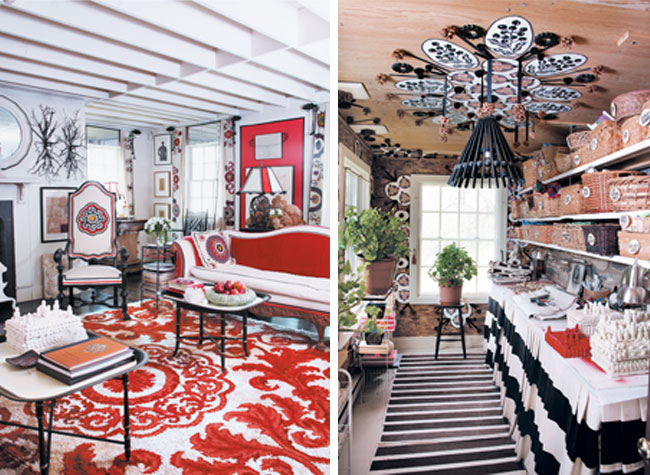 Perched on a hill overlooking the Hudson River, the circa-1740 house had been gutted by fire in 2000. Its owner asked McEvoy, who was renting nearby, if she wanted to take it over after it was rebuilt. “I loved the views,” she recalls, “and it was beautiful at all times of the year.” Her requests for updating the dark cottage: Make a few rooms bigger for entertaining, and leave the ceilings open, exposing the beams, for maximum height. “I don’t mind looking at pipes and beams, but low ceilings make you feel like you’re living in a little box.”


"I never use a ruler, because I like the
way you can see the hand in the work"

A staircase with a coral runner leads from the living room to two bedrooms. Hers, in bright white and warm yellow, is dominated by a headboard covered with hundreds of seashells that she affixed herself with a glue gun; framed shell  collages pick up the theme on the walls and the vanity. “They are slightly corny,” she says, “like something from the Lido in the ’40s, but I love them.” In the sublimely pretty guest room across the hall, a low slipper chair is appliquéd with bits of an old shawl, and lampshades are bedecked with ribbons. 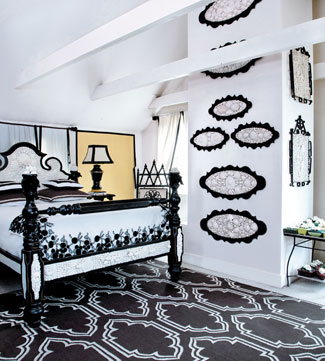 McEvoy has done virtually all the detailing and embellishment throughout the house, using an arsenal of pens, glue guns, seashells, leaves, and fabric remnants. “I never use a ruler,” she says, “because I like the way you can see the hand in the work.” Her DIY experiments  started in the ’80s, when gold and silver gel pens hit the market and she began drawing dots on the oak furniture in her Paris apartment. Over the years, she has stuck shells, nuts, and feathers on walls, ceilings, and lamps and re-covered antique seating pieces with fabric remnants; virtually every furnishing has met up with her Magic Markers, which she uses to add decorative lines to wooden tables, chairs, and mantels.

" I don’t mind looking at pipes and beams,
but low ceilings make you feel like you’re living in a little box"

Fascinated by the versatility of natural materials, McEvoy recently ordered 1,000 acorns to do a ceiling installation. But the former fashion force has hardly turned into a country bumpkin crazed with crafting. She has made at least a dozen trips to Morocco to research her book on Willis, an American decorator who designed sumptuous North African palaces for various Gettys and Rothschilds. “Bill was dramatic, theatrical, and very brave,” she says, “evolving the design of his adopted country while retaining great respect for it. I admire that.” The same could be said of McEvoy herself. Much like her subject, she understands what it means to have a keen sense of place.