Her mason said it couldn’t be done, but Margaret Kerr was determined. It was 1986, and she was in the middle of designing a medieval herb garden at her house. Two rectangular spaces were just “crying out to be rugs.”

Her mason said it couldn’t be done, but Margaret Kerr was determined. It was 1986, and she was in the middle of designing a medieval herb garden at her house. Two rectangular spaces were just “crying out to be rugs,” says Kerr, who drew her inspiration from childhood visits to the Cloisters museum, and she decided to make them in brick.

Kerr’s very first design is based on a Persian rug in the Springs home that she shared with her late husband, artist Robert Richenburg. Lots of trial and error led to its creation, with Kerr assuring her mason, “‘This isn’t a sidewalk; it’s a sculpture.’ We didn’t know what we were doing, but the next one was easier.”

Shortly after Kerr finished the second rug, Arlene Bujese of the Benton Gallery featured her work in a solo exhibition, which encouraged the artist to experiment with brick in other ways, including wall installations, brick-dust art, and even a collection incorporating text, titled “A Year of Love Letters.” 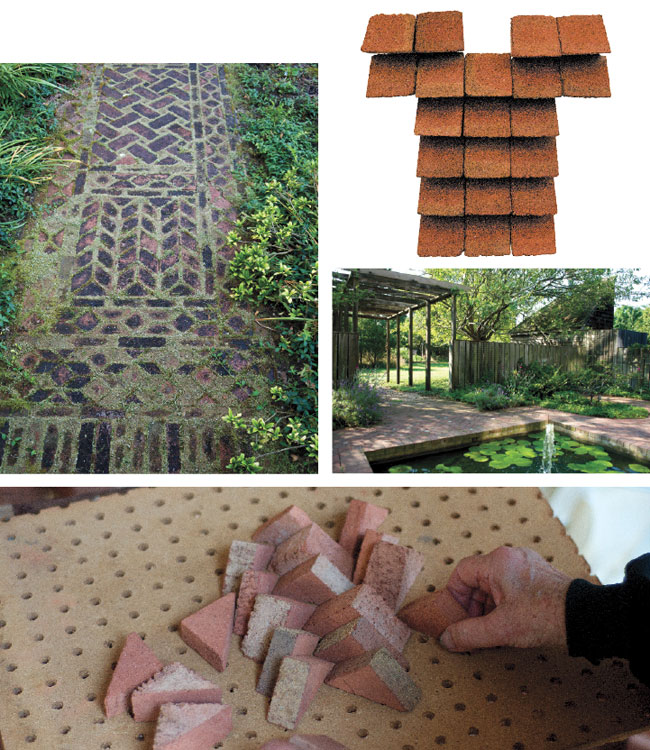 Kerr now creates rugs for both permanent and temporary installations. Once she has an idea of the design in mind, she plays with leftover bricks from previous projects and arranges rough layouts on the floor of her studio, after which her clients view the mock-up before approving the pattern.

Kerr’s rugs are typically inspired by ancient mosaic artistry as well as Oriental elements like fringes and borders. She incorporates a kilim band, or a strip of pattern inside the fringe, into every carpet and takes full advantage of the bricks—from shards to entire blocks—using both the smooth and rough sides to create contrast. (Cutting brick horizontally makes for a coarser texture and is jokingly called “gold brick,” due to the costliness of the technique.)

The process is highly collaborative. Kerr’s current masons, Joe and Candido Goncalves, work with the heavy machinery and help her assemble the rugs. Once the pieces are cut, they dig out a space for the sculpture and fill it with sand or stone dust. Next they create a grid of string and lay out the pieces (one of Kerr’s largest projects, a 24-by-10-foot rug, has over 5,000 of them) before leveling everything with a hammer. Then the spaces are filled in with more sand, the excess swept away, and the final creation revealed. “And now you’ve got a rug,” Kerr says. “When it’s all done, we share in the joy.”