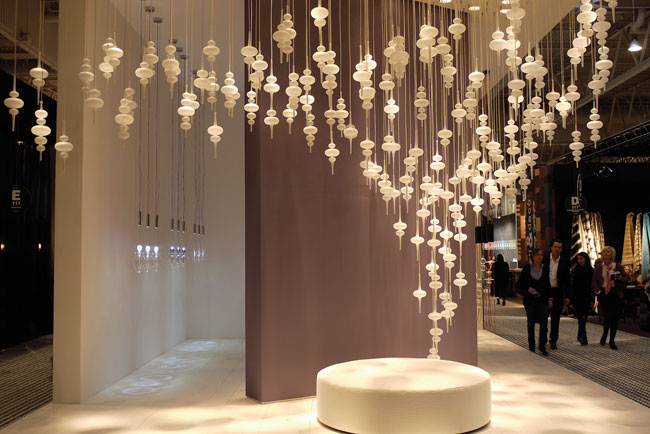 Twice a year outside of Paris, editors, designers and retailers from around the globe flock to the Maison et Objet home-furnishings show with the goal of spotting trends in design, and hoping to source the latest and greatest. This is a show I never miss; Paris in any month is divine. Many prefer the winter show, due to the greater presence of textile companies, and in my case, it was also an excuse to be somewhere fun to help banish the January blues. Trend-spotting at the show can be instinctive or involve some analysis. After a day’s walk through the many aisles of product, it seemed many of the vendors I visited were looking at new ways to reach customers and markets—an exercise in reinvention in the wake of a global recession.

For instance, if you were a company whose aesthetic didn’t include color, but instead 20 shades of greige (like Flamant, a Belgian retailer), punches of color suddenly appeared. The reverse was also true: Over the past few years, Richard Ginori, the venerable Italian tabletop company, has had vast displays of colorful plates. This year, everything was creamware. Even Missoni, whose color palette is a veritable rainbow, brandished a selection of neutral tones.

The same held true with many other fabric houses moving from saturated colors to softer palettes (and vice versa). This year, I launched my second fabric collection with Duralee/Highland Court, which features a softer color palette and patterns. Right across from the Duralee booth, Edmond Petit, the French fabric house, was also showing softer colors of aqua, grey, amethyst and pink. Dedar, the Italian textile company, did just the opposite in its January 2011 collection, with even more color, texture and contrast, including the introduction of innovative metallic weaves—something I saw at several other booths.

Another highly visible trend saw some companies taking the most ordinary things and tweaking them in some new and interesting way. Lando transformed watering cans into glazed containers, for instance. Others used clusters of objects to create visual impact. Clusters of lights were everywhere. Viewing objects as masses rather than individual items was successful; it certainly drew my attention and inspired me. As a result, I just ordered a clustered multi-light fixture for one of my projects.

A fine example of elevating the customary is Antolini’s Natura Collection. Slabs of stone are etched with floral, geometric and animal patterns (the crocodile is a can’t miss) directly into the stone, creating the latest “must have” in bath and kitchen surfaces. When I visited the booth, I felt like I had had a design ephiphany.

As a designer of interiors and products, I think this is a lesson for all of us; every so often we need to reevaluate our own homes (and businesses) and reinvent what we already have or do. Who knows what amazing things may result?