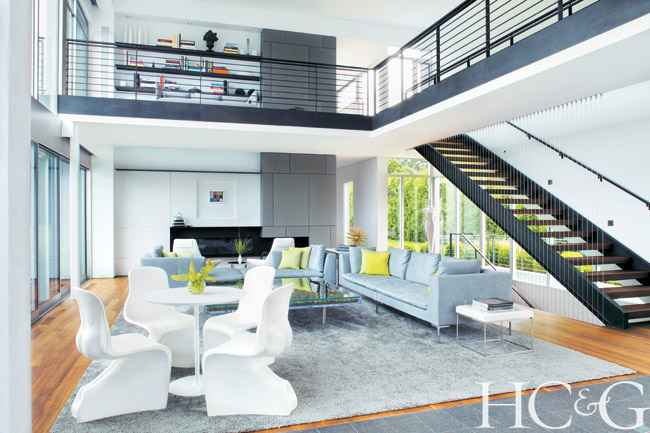 It’s an especially rare kind of kismet: clients who click with their architects right off the bat, who come to the table knowing exactly what they want their dream house to be. But it happened for Vicki Kaplan and her family when they hired the Manhattan design firm Workshop/apd to create a new home in Water Mill, overlooking a pristine reserve a stone’s throw from Mecox Bay. At their initial meeting, “the first words out of Vicki’s mouth were, ‘I want a very modern house, and I want a green house,’” partner Andrew Kotchen recalls, referring to Kaplan’s wish for an environmentally friendly home. (The result of their collaboration eventually received LEED silver certification from the U.S. Green Building Council.) “We just felt a real connection with Andrew—we thought he really understood who we are and what we were after,” adds Kaplan, a former lawyer who once owned the now-shuttered Vintage Collections, a high-end clothing and accessories boutique on Manhattan’s Upper East Side. “He’s brilliant at assessing a space, super-talented, a good listener, a fair negotiator, and an all-around great person—qualities that are hard to find.” 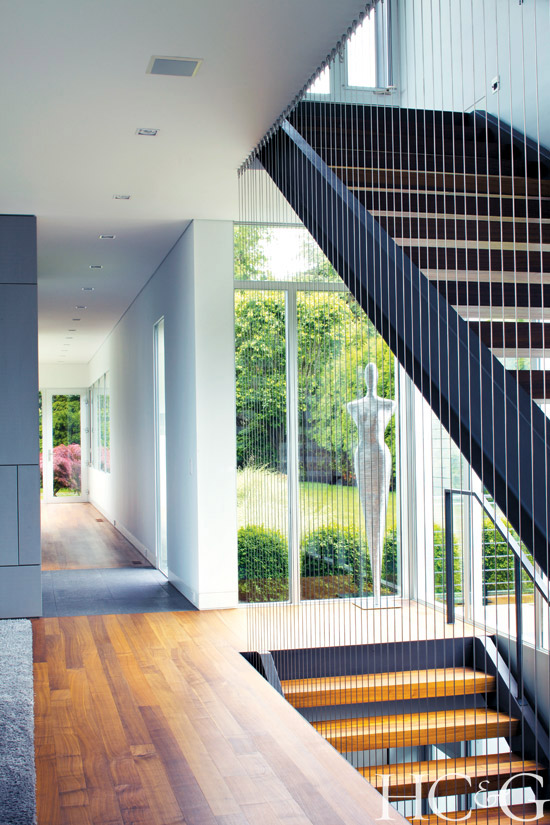 Kaplan, her husband, and their three teenage children had been living on the property since 2003, in a 1970s spec house that they replaced with the strikingly contemporary, 7,500-square-foot seven-bedroom seen on these pages. They also added a freestanding garage and pool house that frames an outdoor dining area shaded by an ipe wood trellis. “Vicki wanted a house that really wows and surprises,” explains Kotchen, who helms Workshop/apd alongside co-partner Matthew Berman. “The lot was nondescript, so we made the house feel like a destination.” The only directive from Kaplan’s husband was that the house not feel cold and that it be low-maintenance—hence the simple but striking exterior of zinc panels and pale gray cement-fiberboard siding, which needs just an occasional power-washing to stay in top shape. “It’s a soothing, calming palette that makes the house disappear into the landscape, or into a gray sky in winter,” Kotchen adds. (Kaplan’s husband did get his own special extravagance: a bocce court in the back yard, shielded from view by a towering hydrangea hedge.) Large windows, ample skylights, and oversize sliding glass doors—mostly facing south, toward landscape architect Edmund Hollander’s geometric plantings of boxwood and long bluestone pavers, and an open field beyond—let in so much natural light that the interior feels bright even on the foggiest of days. 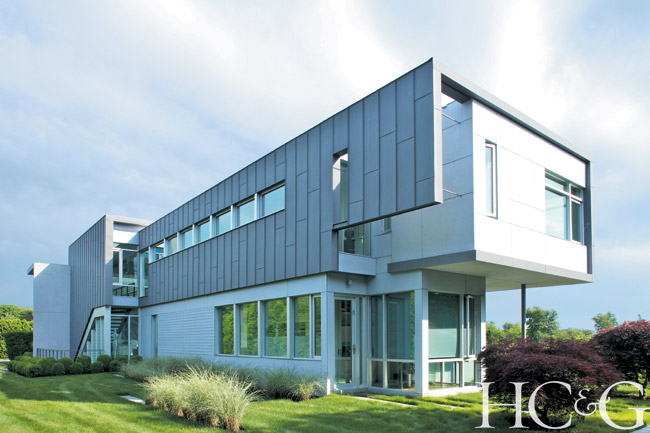 That openness speaks to Kaplan’s desire to blur the boundaries between indoors and outdoors. “We wanted a house that would bring nature in,” she says. “Watching the stars at night through the skylight above our bed is such a treat. And I love watching the sunset from the living room.” It also jibes with the family’s casual lifestyle: There’s no formal dining room, just a small table in a corner of the living room and a big table in the open kitchen, where most of the family’s meals are served. A stunning open staircase, flooded with light, leads down to a teen-friendly rec room with Ping-Pong and pool tables and an overstuffed sofa for watching a large-screen projection TV. 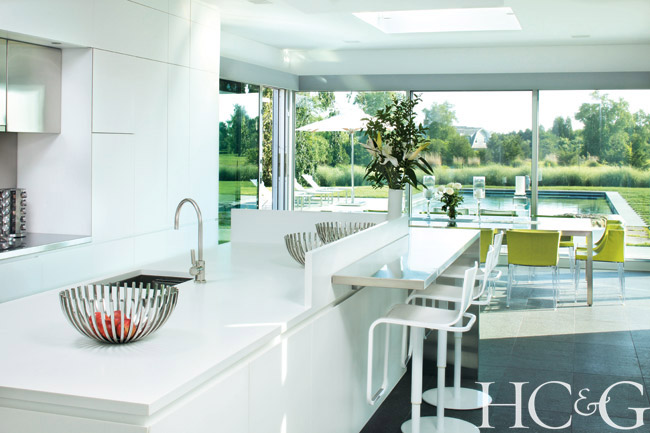 Kaplan herself took charge of the interiors, in collaboration with Workshop/apd designer Leslie Degler. “I’m sure I was a little frustrating to work with,” admits Kaplan. “I wouldn’t agree to something if I didn’t think it was right. So if I was unsure, we kept looking.” Some furnishings are cool and understated, like B&B Italia’s classic Charles sofas in the living room, whereas others are edgier—notably the plastic Fabio Novembre–designed Him & Her chairs, molded with the imprint of muscular buttocks. Kaplan designed the living room coffee table, a glass-topped Plexiglas box encasing faux moss–covered stones, as a riff on Yves Klein’s famous blue-pigment-filled design from the 1960s. “At first we thought it could be a changing landscape, but when we saw that it took four men to install the glass top, we realized whatever went inside the table was going to stay there for a while.” (Kaplan and a friend hair-sprayed each of the stones so they wouldn’t shed their mossy covering.) 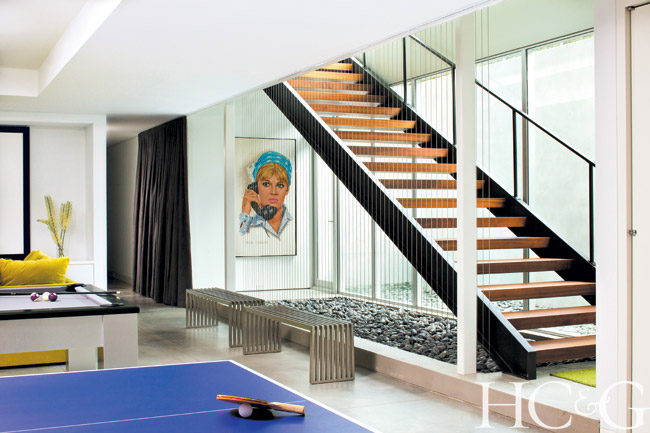 The rec room became something of a group project, as Kaplan, her daughter, and Degler covered an entire wall in faux boxwood, which provides acoustic absorption. On another occasion, she roused a couple of helpers to cover the lower-level stair landing and an adjoining light well with polished river stones. “There was no material that Vicki wouldn’t consider, and no idea that was too out-there,” says Kotchen, summing up his client’s endless energy. “It was a completely free approach to design.”

A version of this article appeared in the August 15 2014 issue of Hamptons Cottages & Gardens with the headline: Vision Quest.